How Long Does It Take For Aleve (Naproxen) to Work 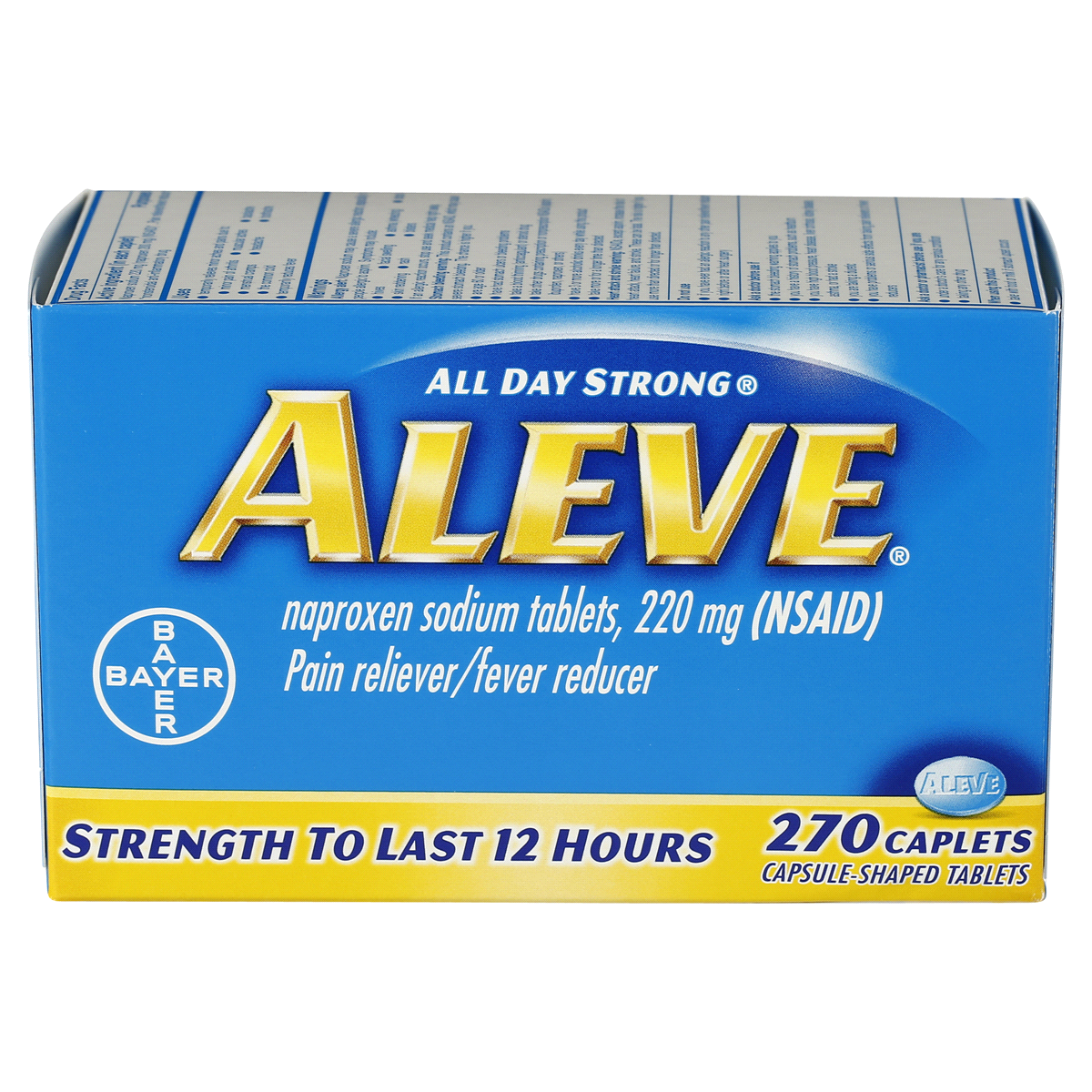 Aleve is one brand of the over-the-counter drug naproxen sodium 220 milligrams (mg). It treats many types of mild pain. You may have taken it to treat your headaches, menstrual cramps, arthritis, muscles aches, toothaches, backaches, and even mild fever. If you take Aleve, though, you may wonder what else it does in your body.

Both Aleve and its prescription counterparts belong to a class of medications called nonsteroidal anti-inflammatory drugs (NSAIDs). These drugs reduce pain and fever by preventing your body from making prostaglandins. Prostaglandins are substances your body produces when tissues of your body are injured. These substances contribute to many of the effects of inflammation, including swelling, fever, and pain.

Inhibiting your body’s production of prostaglandins can help prevent pain and other effects related to inflammation. But it can also interfere with some other functions.

How Long Does It Take For Aleve to Work For Cramps

For moderate menstrual cramps, the nonsteroidal anti-inflammatory drugs (NSAIDs) can be helpful. The NSAIDs like Aleve are more effective than aspirin in inhibiting the production and action of the prostaglandins. For optimal control of menstrual cramps, a woman should start taking an NSAID before the onset of her pain becomes difficult to control. This might mean starting medication 1 to 2 days before the onset of her period and continuing the medication for the first 1 to 2 days of her period.

You should start to feel better 1 hour after taking Aleve. But it might take up to 3 days for naproxen to work properly if you take it regularly twice a day.

How Long Does It Take For Aleve to Work For Fever

NSAIDs like Aleve help decrease inflammation, pain, and fever. They do this by blocking the body’s production of a substance called prostaglandin. This substance promotes inflammation and fever by causing the release of various chemical signals in your body.

People should only use Aleve for a short-term period of between 3–5 days for pain and no more than 3 days for fever. If they need ongoing treatment, people should consult their doctor first.

How Long Does It Take For Aleve to Work For Headache

By blocking cyclooxygenase, nonsteroidal anti-inflammatory drugs such as Aleve decrease the synthesis of prostaglandins, which are involved in the pathophysiology of migraine headaches. NSAIDs are by far the most used class of drugs for the acute treatment of headache in general, and migraine in particular.

According to a 2013 review, Naproxen was more effective than placebo for relieving migraine headache in adults, but only weakly so. From having headache pain described as moderate or severe, about 2 in 10 people (17%) were pain‐free at two hours when treated with naproxen.

How Long Does It Take For Aleve to Work For Toothache

A toothache or tooth pain is most often caused when the nerve to a tooth is irritated, but there are numerous other reasons for a person to experience tooth pain. In a double-blind, parallel, placebo-controlled study, 203 patients with post-operative dental pain following the extraction of one or two bony impacted third molars were randomized to receive a single dose of naproxen sodium 220 mg, ibuprofen 200 mg or placebo. From 1 to 12 hours postdose, naproxen sodium showed a trend for superior analgesic efficacy compared with ibuprofen; this trend reached statistical significance at the 12-hour time point. Both drugs were well-tolerated and effective analgesics for postoperative dental pain.

How Long Does It Take For Aleve to Work For Inflammation

Naproxen has an elimination half life of 12 to 17 hours. This is the time it takes for your body to reduce plasma drug levels by half. It takes approximately 5.5 x elimination half-life for a drug to be eliminated from your system. Therefore naproxen will be in your system for about 93.5 hours (5.5 x 17 hours).

The anti-inflammatory benefits of NSAIDs are achieved at the higher doses found in prescription medicines. The pain-relieving effects of NSAIDs begin quickly — within a few hours. However, swelling and warmth in joints may take longer to get better; it can take up to two weeks before you see full benefits.

How Long Does It Take For Aleve to Work For Arthritis

The lay public for whom NSAIDs are prescribed and recommended by both healthcare professionals and drug manufacturers should be aware that long-term NSAID use is detrimental to articular cartilage. Specifically, be informed that NSAIDs will likely worsen the osteoarthritis disease for which it is prescribed.

That said, a study of naproxen and ibuprofen in patients with osteoarthritis  reported that Naproxen was superior to ibuprofen in relieving resting pain, movement pain, night pain and interference with daily activities. You should start to feel better 1 hour after taking naproxen. But it might take up to 3 days for naproxen to work properly if you take it regularly twice a day.

Back pain often develops without a cause that your doctor can identify with a test or an imaging study. Conditions commonly linked to back pain include: Muscle or ligament strain. Repeated heavy lifting or a sudden awkward movement can strain back muscles and spinal ligaments.

NSAIDs are often the go-to drugs for back pain relief. They can be purchased over the counter (or, in higher doses, by prescription). Drugs like naproxen (Aleve) help reduce pain, swelling, and inflammation in muscles and around damaged spinal discs or arthritic joints

When it comes to back pain, naproxen is better for some types, such as period pain or back pain because of the shorten time it relieves such pains.

Side effects from short-term use

Prostaglandins naturally help protect your stomach from damage. When Aleve reduces your prostaglandin production, it can cause:

These effects are more likely the older you are or the longer you use Aleve.

More serious side effects include:

These effects can be fatal and can happen without warning. If you notice severe stomach pain or bloody or black, tarry stools while you take Aleve, stop taking the drug and call your doctor right away. To lower your risk of digestive system side effects, use the lowest effective dosage for the shortest time.

Aleve can also reduce your blood’s ability to clot. This can lead to bleeding. Talk to your doctor before using Aleve if you plan on having surgery soon.

Side effects from long-term use

Long-term use of Aleve can make your heart work harder. Aleve makes you retain water, which increases the load on your heart. This extra work can cause pressure on your cardiovascular system and can sometimes lead to a heart attack or stroke. These risks are even greater at higher dosages, even if you don’t have any heart conditions or risk of heart disease. Call 911 or local emergency services if you have:

These are signs of a stroke or heart attack. If you take Aleve and have unexplained weight gain or swelling, especially in your legs and feet, talk to your doctor right away. These may be signs of heart failure. To lower your risk of heart problems, use the lowest dosage for the shortest amount of time.

Prostaglandins maintain the pressure in your kidneys so that these organs can filter the fluids in your body. A decrease in your level of prostaglandins from taking Aleve can cause problems with your kidney function. You may notice fluid retention or changes in how much you urinate. If you notice these changes while taking Aleve, stop taking it and contact your doctor.

People with certain medical conditions may experience more side effects from Aleve than other people. These conditions include:

If you have any of these conditions, talk to your doctor before using Aleve. Your doctor may suggest another medication to avoid complications. SEE: Is Aleve Ibuprofen?

How Long Does It Take For Ibuprofen To Work?