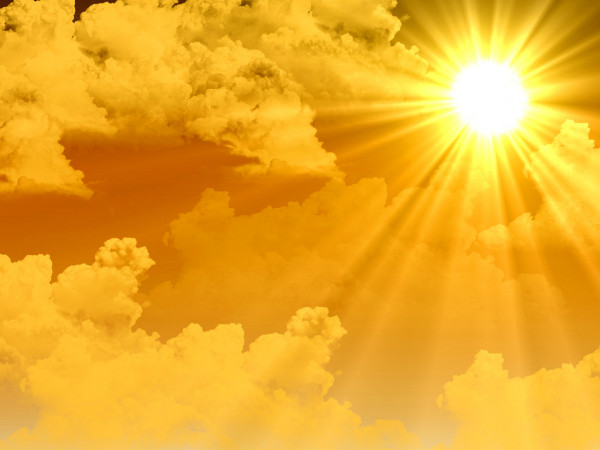 Sunlight, also called sunshine, solar radiation that is visible at Earth’s surface. The amount of sunlight is dependent on the extent of the daytime cloud cover. Some places on Earth receive more than 4,000 hours per year of sunlight (more than 90 percent of the maximum possible), as in the Sahara; others receive less than 2,000 hours, as in regions of frequent storminess, such as Scotland and Iceland. Over much of the middle-latitude region of the world, the amount of sunlight varies regularly as the day progresses, owing to greater cloud cover in the early morning and during the late afternoon.

Ordinarily, sunlight is broken down into three major components:

(1) visible light, with wavelengths between 0.4 and 0.8 micrometre,

(2) ultraviolet light, with wavelengths shorter than 0.4 micrometre, and

The visible portion constitutes nearly half of the total radiation received at the surface of Earth. Although ultraviolet light constitutes only a very small proportion of the total radiation, this component is extremely important. It produces vitamin D through the activation of ergosterol. Unfortunately, the polluted atmosphere over large cities robs solar radiation of a significant portion of its ultraviolet light. Infrared radiation has its chief merit in its heat-producing quality. Close to half of the total solar radiation received at the surface of Earth is infrared.

On its path through the atmosphere, solar radiation is absorbed and weakened by various constituents of the atmosphere. It is also scattered by air molecules and dust particles. Short wavelengths of light, such as blue, scatter more easily than do the longer red wavelengths. This phenomenon is responsible for the varying colour of the sky at different times of the day. When the sun is high overhead, its rays pass through the intervening atmosphere almost vertically. The light thus encounters less dust and fewer air molecules than it would if the sun were low on the horizon and its rays had a longer passage through the atmosphere. During this long passage, the dominant blue wavelengths of light are scattered and blocked, leaving the longer, unobstructed red wavelengths to reach Earth and lend their tints to the sky at dawn and dusk.

An effective absorber of solar radiation is ozone, which forms by a photochemical process at heights of 10–50 km (6–30 miles) and filters out most of the radiation below 0.3 micrometre. Equally important as an absorber in the longer wavelengths is water vapour. A secondary absorber in the infrared range is carbon dioxide. These two filter out much of the solar energy with wavelengths longer than 1 micrometre.

The Eppley pyrheliometer measures the length of time that the surface receives sunlight and the sunshine’s intensity as well. It consists of two concentric silver rings of equal area, one blackened and the other whitened, connected to a thermopile. The sun’s rays warm the blackened ring more than they do the whitened one, and this temperature difference produces an electromotive force that is nearly proportional to the sunlight’s intensity. The electromotive force is automatically measured and recorded and yields a continuous record of the duration and intensity of the periods of sunlight.

How radiation is measured

Four different components of radiation in the atmosphere are measured routinely at some synoptic land stations:

Diffuse radiation – global radiation minus the direct component from the sun, also measured on a horizontal surface

Direct radiation – radiation coming from the sun and not the rest of the sky, measured at normal incidence

Global radiation is measured by a pyranometer.  Measurement of the diffuse components requires a tracking device that ensures that the sun is obscured by a ring or a tracking shading device and is only undertaken at a few principal radiation stations. All instruments operate by directing incoming radiation onto the black-painted upper surface of a thermopile. This generates a temperature gradient across the thermopile which in turn produces a voltage proportional to the intensity of the radiation.

The correct exposure of any radiation or sunshine instrument at the observing site is very important.

Ideally, the horizon should be level in all directions, although the poleward arc is less important for sunshine and direct radiation measurements. In practice, this is rarely the case and sites need to be assessed and graded according to the distribution of obstacles around the horizon.

All instruments are calibrated by reference to absolute cavity radiometers, standard radiation instruments that are maintained by the Met Office. These standards are precision pyrheliometers incorporating an electrical heater on the sensing element, the input of which can be measured very accurately. Intercomparisons made at Davos Switzerland ensure traceability to the world radiation standard.

How is Sunlight measured?

For a great many years the only instrument for measuring sunshine duration was the Campbell-Stokes sunshine recorder. The original instrument was invented by Campbell in 1858 but the later card-holding version was a development by Stokes in 1879.

Most of the climate record was collected using this instrument and it continues in use today at many non-automated climate stations. A glass sphere focuses the sun’s direct radiation on a graduated card and the length of the burn trace on the card corresponds to the duration of sunshine.

This method of measurement significantly overestimates sunshine duration on days when the sun is frequently shaded by passing clouds. At many automated stations, a modern sunshine sensor is used in its place. It uses an array of differently exposed photodiodes to estimate the intensity of direct radiation. A threshold intensity of 120 Wm-2 defines the occurrence of full sunshine. SEE: Skin Cancer in Australia Compared To Other Countries

Radiation Oncology: Everything You Should Know

Which Type Of Pollution Includes CFCs And Smog?
January 10, 2021 FeaturesPublic HealthComments Off on Instrument Used To Measure Sunshine and Radiation