How True Is The Legend of The Wendigo 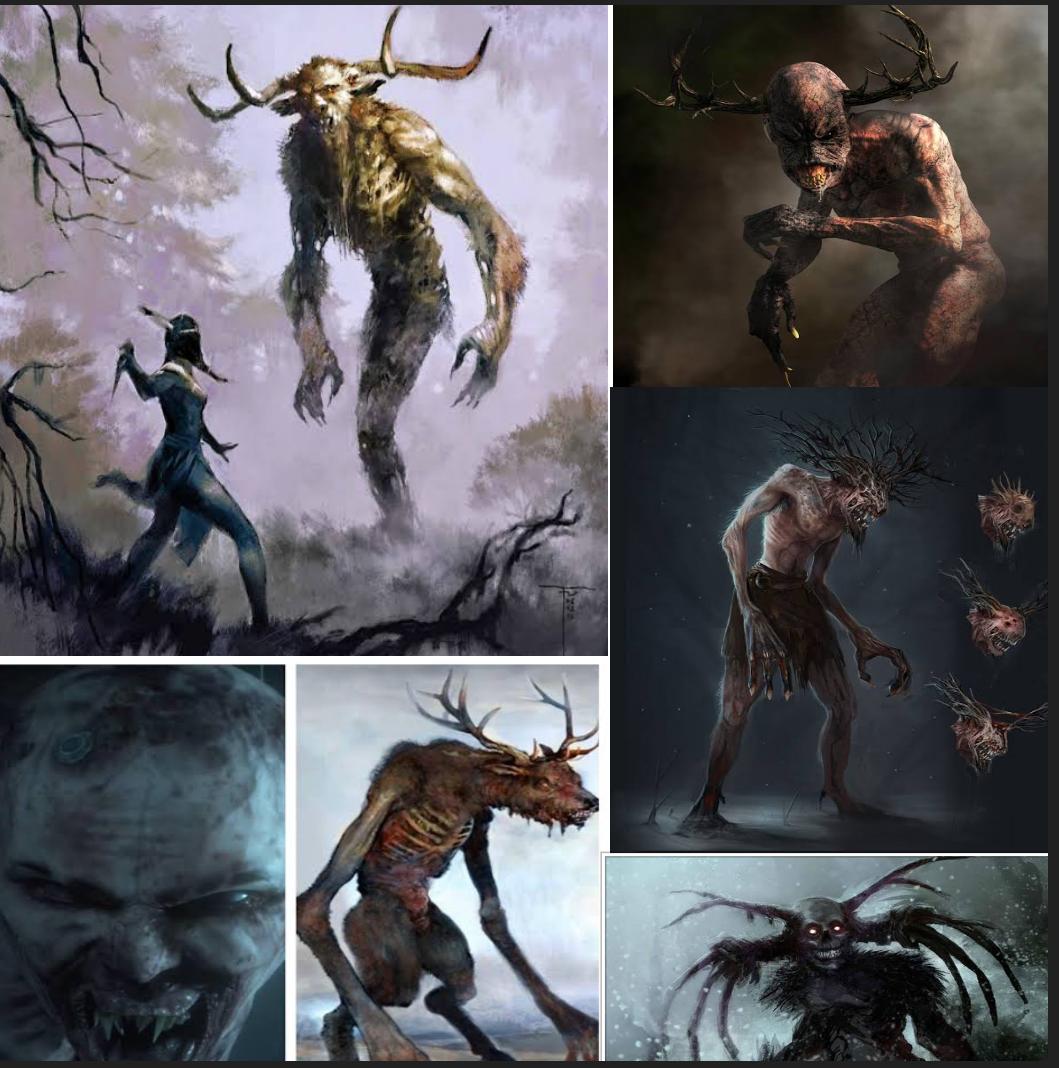 Available records indicates that Wendigo is a mythological creature or evil spirit from the folklore of the First Nations Algonquian tribes based in the northern forests of Nova Scotia, the East Coast of Canada, and Great Lakes Region of Canada and in Wisconsin, United States. The wendigo is described as a monster with some characteristics of a human or as a spirit who has possessed a human being and made them become monstrous. Its influence is said to invoke acts of murder, insatiable greed, cannibalism and the cultural taboos against such behaviors.

The creature lends its name to the controversial modern medical term Wendigo psychosis, described by psychiatrists as a culture-bound syndrome with symptoms such as an intense craving for human flesh and fear of becoming a cannibal. In some Indigenous communities, environmental destruction and insatiable greed are also seen as a manifestation of Wendigo psychosis.

The Wechuge is a similar being that appears in the legends of the Athabaskan people of the Northwest Pacific Coast. It too was cannibalistic. However, it was not so much insane as enlightened with ancestral insights.The wendigo is part of the traditional belief system of a number of Algonquin-speaking peoples, including the Ojibwe, the Saulteaux, the Cree, the Naskapi, and the Innu. Although descriptions can vary somewhat, common to all these cultures is the view that the wendigo is a malevolent, cannibalistic, supernatural being. They were strongly associated with winter, the north, coldness, famine, and starvation.

Basil H. Johnston, an Ojibwe teacher and scholar from Ontario, gives a description of a wendigo:

The Wendigo was gaunt to the point of emaciation, its desiccated skin pulled tightly over its bones. With its bones pushing out against its skin, its complexion the ash-gray of death, and its eyes pushed back deep into their sockets, the Wendigo looked like a gaunt skeleton recently disinterred from the grave. What lips it had were tattered and bloody. Unclean and suffering from suppuration of the flesh, the Wendigo gave off a strange and eerie odor of decay and decomposition, of death and corruption.

In Ojibwe, Eastern Cree, Westmain Swampy Cree, Naskapi, and Innu lore, wendigos are often described as giants that are many times larger than human beings, a characteristic absent from myths in other Algonquian cultures. Whenever a wendigo ate another person, it would grow in proportion to the meal it had just eaten, so it could never be full. Therefore, wendigos are portrayed as simultaneously gluttonous and extremely thin due to starvation.

The Wendigo is seen as the embodiment of gluttony, greed, and excess: never satisfied after killing and consuming one person, they are constantly searching for new victims.

In some traditions, humans overpowered by greed could turn into wendigos; the myth thus served as a method of encouraging cooperation and moderation. Other sources say wendigos were created when a human resorted to cannibalism to survive. Humans could also turn into wendigos by being in contact with them for too long.

Among the Assiniboine, the Cree and the Ojibwe, a satirical ceremonial dance is sometimes performed during times of famine to reinforce the seriousness of the wendigo taboo. The ceremony, known as wiindigookaanzhimowin, was performed during times of famine, and involved wearing masks and dancing backwards around a drum. The last known wendigo ceremony conducted in the United States was at Lake Windigo of Star Island of Cass Lake, located within the Leech Lake Indian Reservation in northern Minnesota.

In historical accounts of Wendigo psychosis, it has been reported that humans became possessed by the Wendigo spirit, after being in a situation of needing food and having no other choice besides cannibalism. In 1661, The Jesuit Relations reported:

What caused us greater concern was the news that met us upon entering the Lake, namely, that the men deputed by our Conductor for the purpose of summoning the Nations to the North Sea, and assigning them a rendezvous, where they were to await our coming, had met their death the previous Winter in a very strange manner. Those poor men (according to the report given us) were seized with an ailment unknown to us, but not very unusual among the people we were seeking. They are afflicted with neither lunacy, hypochondria, nor frenzy; but have a combination of all these species of disease, which affects their imaginations and causes them a more than canine hunger. This makes them so ravenous for human flesh that they pounce upon women, children, and even upon men, like veritable werewolves, and devour them voraciously, without being able to appease or glut their appetite—ever seeking fresh prey, and the more greedily the more they eat. This ailment attacked our deputies; and, as death is the sole remedy among those simple people for checking such acts of murder, they were slain in order to stay the course of their madness.

One of the more famous cases of Wendigo psychosis reported involved a Plains Cree trapper from Alberta, named Swift Runner. During the winter of 1878, Swift Runner and his family were starving, and his eldest son died. Twenty-five miles away from emergency food supplies at a Hudson’s Bay Company post, Swift Runner butchered and ate his wife and five remaining children. Given that he resorted to cannibalism so near to food supplies, and that he killed and consumed the remains of all those present, it was revealed that Swift Runner’s was not a case of pure cannibalism as a last resort to avoid starvation, but rather of a man with Wendigo psychosis. He eventually confessed and was executed by authorities at Fort Saskatchewan.

Another well-known case involving Wendigo psychosis was that of Jack Fiddler, an Oji-Cree chief and medicine man known for his powers at defeating wendigos. In some cases, this entailed killing people with Wendigo psychosis. As a result, in 1907, Fiddler and his brother Joseph were arrested by the Canadian authorities for homicide. Jack committed suicide, but Joseph was tried and sentenced to life in prison. He ultimately was granted a pardon, but died three days later in jail before receiving the news of this pardon.

Fascination with Wendigo psychosis among Western ethnographers, psychologists, and anthropologists led to a hotly debated controversy in the 1980s over the historicity of this phenomenon. Some researchers argued that essentially, wendigo psychosis was a fabrication, the result of naïve anthropologists taking stories related to them at face value without observation. Others have pointed to a number of credible eyewitness accounts, both by Algonquians and others, as evidence that wendigo psychosis was a factual historical phenomenon.

The 10th revision of the International Statistical Classification of Diseases and Related Health Problems (ICD) classifies “Windigo” as a culture-specific disorder, describing it as “Rare, historic accounts of cannibalistic obsession. Symptoms included depression, homicidal or suicidal thoughts, and a delusional, compulsive wish to eat human flesh. Some controversial new studies question the syndrome’s legitimacy, claiming cases were actually a product of hostile accusations invented to justify the victim’s ostracism or execution.

As a concept or metaphor

In addition to denoting a cannibalistic monster from certain traditional folklore, some Native Americans also understand the wendigo conceptually. As a concept, the wendigo can apply to any person, idea, or movement infected by a corrosive drive toward self-aggrandizing greed and excessive consumption, traits that sow disharmony and destruction if left unchecked. Ojibwe scholar Brady DeSanti asserts that the wendigo “can be understood as a marker indicating . . . a person . . . imbalanced both internally and toward the larger community of human and spiritual beings around them.” Out of equilibrium and estranged by their communities, individuals thought to be afflicted by the wendigo spirit unravel and destroy the environmental balance around them. Chippewa author Louise Erdrich’s novel The Round House, winner of the National Book Award, depicts a situation where an individual person becomes a wendigo. The novel describes its primary antagonist, a rapist whose violent crimes desecrate a sacred site, as a wendigo who must be killed because he threatens the reservation’s safety.

In addition to characterizing individual people who exhibit destructive tendencies, the wendigo can also describe movements and events with similarly negative effects. According to professor Chris Schedler, the figure of the wendigo represents “consuming forms of exclusion and assimilation” through which groups dominate other groups.” This application allows Native Americans to describe colonialism and its agents as wendigos, since the process of colonialism ejected natives from their land and threw the natural world out of balance. DeSanti points to the 1999 horror film Ravenous as an illustration of this argument equating “the cannibal monster” to “American colonialism and manifest destiny”. This movie features a character who articulates that expansion brings displacement and destruction as side effects, explaining that “manifest destiny” and “western expansion” will bring “thousands of gold-hungry Americans . . . over the mountains in search of new lives . . . This country is seeking to be whole . . . Stretching out its arms . . . and consuming all it can. And we merely follow”. For a more detailed exploration linking wendigo attributes to colonialism, see Jack D. Forbes’s 1978 book Columbus and Other Cannibals, which was an influential text in the American Indian Movement.

As a concept, wendigo can apply to situations other than some Native American-European relations. It can serve as a metaphor explaining any pattern of domination by which groups subjugate and dominate or violently destroy and displace. Joe Lockhard, English professor at Arizona State University, argues that wendigos are agents of “social cannibalism” who know “no provincial or national borders; all human cultures have been visited by shape shifting wendigos. Their visitations speak to the inseparability of human experience . . . National identity is irrelevant to this borderless horror”. Lockhard’s ideas explain that wendigos are an expression of a dark aspect of human nature: the drive toward greed, consumption, and disregard for other life in the pursuit of self-aggrandizement.

Although distinct from how it appears in the traditional lore, one of the first appearances of a character inspired by, or named after, a Wendigo in non-Indigenous literature is Algernon Blackwood’s 1910 short story “The Wendigo”. Blackwood’s work has influenced many of the subsequent portrayals in mainstream horror fiction, such as August Derleth’s “The Thing that Walked in the Wind” and “Ithaqua” (1933 and 1941), which in turn inspired the character in Stephen King’s novel Pet Sematary, where it is a personification of evil, an ugly grinning creature with yellow-grey eyes, ears replaced by ram’s horns, white vapour coming from its nostrils, and a pointed, decaying yellow tongue. These works set the template for later portrayals in popular culture, at times even replacing the Native American lore. In an early short story by Thomas Pynchon, “Mortality and Mercy in Vienna” (first published in 1959) the plot centers around a character developing Wendigo Syndrome and going on a killing spree.

A character inspired by the wendigo appears in American comic books published by Marvel Comics. Created by writer Steve Englehart and artist Herb Trimpe, the monster is the result of a curse that afflicts those who commit acts of cannibalism. It first appeared in The Incredible Hulk #162 (April 1973), and again in the October 1974 issue.

Other creatures based on the legend, or named for it, appear in various films and television shows, including Dark Was the Night and Ravenous. Television series include Teen Wolf, Supernatural, Blood Ties Charmed, Grimm, and Hannibal, where an FBI profiler has recurring dreams or visions of a Wendigo that symbolizes the titular cannibalistic serial killer. In the DuckTales Christmas special, “Last Christmas!”, a wendigo antagonist is described as one of the “poor souls turned into monsters by obsession and desperation.

The True Story of La Llorona

How Long Does a Drug induced Psychosis Last?
Wendigo
July 31, 2020 FeaturesPublic HealthComments Off on How True Is The Legend of The Wendigo