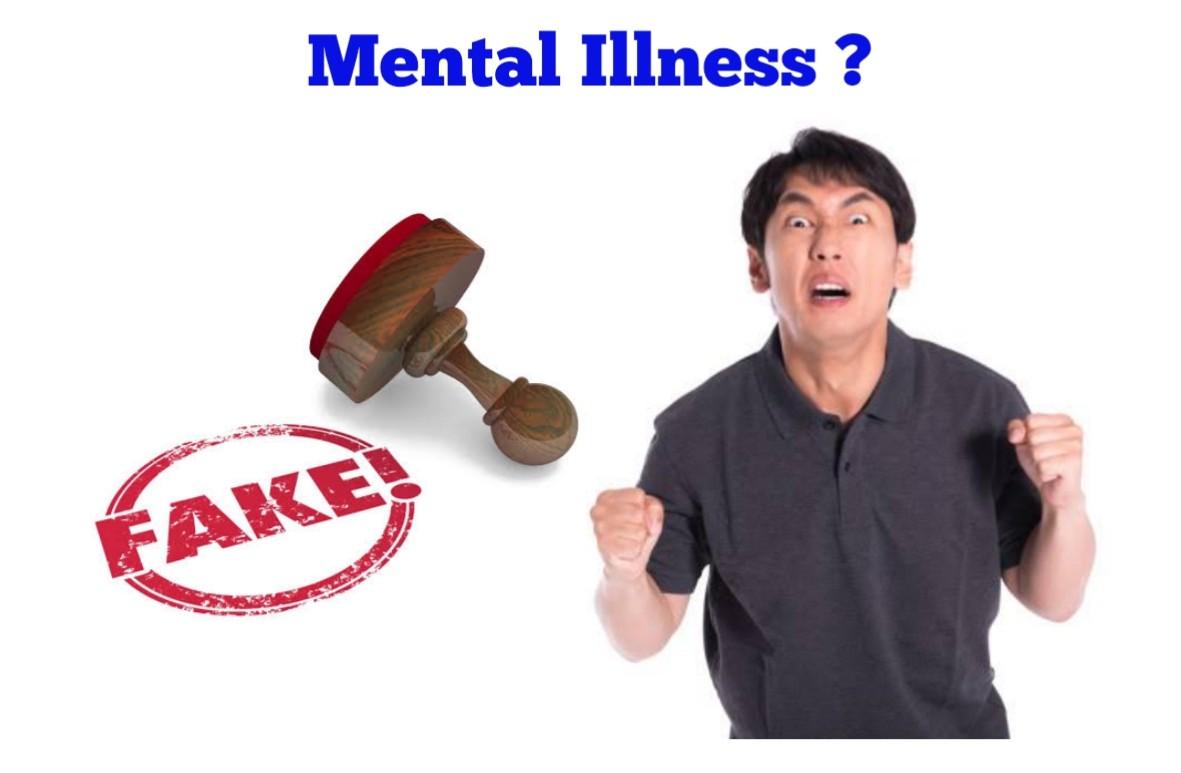 Mental health includes our emotional, psychological, and social well-being. It affects how we think, feel, and act. It also helps determine how we handle stress, relate to others, and make choices. Mental health is important at every stage of life, from childhood and adolescence through adulthood.

There are many different mental disorders, with different presentations. They are generally characterized by a combination of abnormal thoughts, perceptions, emotions, behavior and relationships with others.  According to the World Health Organization, the burden of mental disorders continues to grow with significant impacts on health and major social, human rights and economic consequences in all countries of the world but in some cases certain things simply don’t add up.

What is Munchausen syndrome?

Unfortunately,  many in are in the habit of faking mental illnesses most times for personal gains such as prescription medications, money , family or work privileges(Malingering).

Today it is quite common to see or hear news about people claiming insanity in order to avoid jail time or the death penalty. In a state like Colorado, proving insanity can avert a death sentence but studies have shown that people who fake symptoms of mental illness can convince themselves that they genuinely have those symptoms. People will also adopt and justify signs of illness that they never reported themselves when presented with manipulated answers, according to the study published online July 9 in the Journal of Clinical and Experimental Neuropsychology. Not only do the findings demonstrate that deliberately feigning illness can evolve into an unconscious embellishment of symptoms, they indicate that self-perception of mental health is susceptible to suggestion. The study has particularly serious implications for cases in which people fake mental illness to take advantage of the legal system.

The first step in identifying this phenomenon according experts is to do a thorough review of the persons  history. Mental illness doesn’t develop overnight, so it’s important to know if the person has been hospitalized or treated for similar symptoms. When the patient is involved in a crime the investigators can also review the crime-scene report. If the suspect has hidden the weapon, washed off his fingerprints, or taken other steps to elude the police, it’s a sign of clear thinking—not mental illness.

Step two involves come one or more long, rambling interviews—the longer the better, because after a few hours, some suspects begin to lose track of their symptoms or grow weary of the con. Phillip J. Resnick, professor of psychiatry at Case Western Reserve University, says he asks the suspect to talk at length about his history before saying a word about the crime, to lessen the chance of “retrofitting” a pattern of alleged illness to the deed. He and his colleagues listen carefully for signs of particular mental illnesses.

“Most malingerers don’t read the psychological literature,” says Tali Walters, a Boston forensic psychologist, so they present a Hollywood version of how a crazy person acts.

For example, some suspects claim to hear voices in their head that they’re powerless to resist, a commonly dramatized depiction of schizophrenia. Unlike what we see in the movies, most auditory hallucinations are benign; they seem to originate outside the head (not inside), and rarely come from aliens or other non-human beings. Only a small percentage are “command hallucinations,” and even fewer command a violent act. Furthermore, genuine schizophrenics find strategies to ignore these voices, or even make peace with them. They learn that certain activities, such as exercise, mute the voices; while others, such as watching TV, encourage them—the “voice” can’t seem to resist commenting on what it sees.

So if a suspect says he feels compelled to obey alien voices inside his head telling him to kill, there’s a good chance he’s feigning. Case in point: David Berkowitz, aka “Son of Sam,” who shot six people in a three-year murder spree in New York. Berkowitz claimed that he was following the commands of a demon-possessed Labrador retriever, but later admitted it was a hoax. “A dog,” says Resnick, “is not a typical [auditory] hallucination.”

Malingerers often exaggerate their symptoms and ignore common, subtle signs such as the blunting of a mentally ill patient’s emotions. Some fakers say one thing and do another. They might feign confusion to the psychiatrist but later converse easily with cell-mates, or claim to be paranoid while sitting at ease. Some combine symptoms from different conditions, such as hallucinations of schizophrenia and obscene outbursts found in Tourette’s syndrome. The forensic psychologist may suggest an outrageous delusion during the interview, such as, “Do you believe cars are part of an organized religion?” Fakers might latch onto this bait and perhaps even run with it. Real schizophrenics would say no.

Malingering is not considered a psychiatric condition. It does share some similarities with what is known as factitious disorder (Munchausen syndrome). A factitious disorder involves faking symptoms of an illness without a clear motive or reward. It is also important to distinguish malingering from somatic symptom disorder, a condition where people become distressed about symptoms that may be imagined or exaggerated.

Compared with other psychiatric disorders, diagnosis of factitious disorders is rare, with identification largely dependent on the systematic collection of relevant information, including a detailed chronology and scrutiny of the patient’s medical record.

Management of such disorders ideally requires a team-based approach and close involvement of the primary care doctor. As deception is a key defining component of factitious disorders, diagnosis has important implications for young children, particularly when identified in women and health-care workers. Malingering is considered to be rare in clinical practice, whereas simulation of symptoms, motivated by financial rewards, is regarded as more common in medicolegal settings.