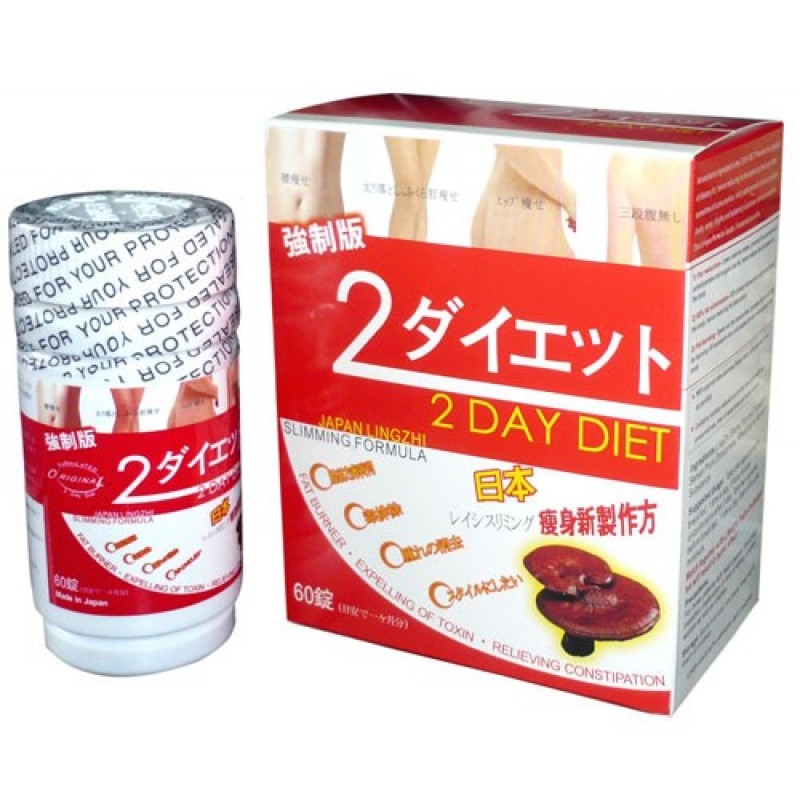 Original 2 Day Diet Pill is a weight loss pill made with natural ingredients said to have helped thousands to lose weight. There are ingredients included that are used in ancient Chinese medicine. The 2 Day Diet pills include six herbal ingredients that have been used for centuries in traditional Chinese medicine and Ayurvedic medicine, such as Lingzhi, Ebony, Fox-nut, Tuckahoe, Semen Pruni, Dioscoreae.

Lingzhi the oldest known mushroom which has been used in traditional Chinese medicine. It’s believed to help with improving lifespan as well as several other benefits. According to The British Journal of Nutrition, a highly-respected database from the National Library of Medicine, Lingzhi may be able to boost the immune system, but little is known about its effect on body weight. Another study concluded that the plant has some anti-obesity effects.

Tuckahoe is a plant used by the Native Americans as a source of food it is used in Chinese medicine to aid digestion. While Discoreae a Chinese herb similar to yams. It’s used to improve digestion and aid the kidneys. Wheat Germ is the embryo of a seed that provides a nutritionally balanced assortment of vitamins and minerals. It also contains some carbohydrates and a few calories.

Since its launch, 2 Day Diet Japan Lingzhi has already helped thousands of people get the weight they want without any side effects. Adopting biotical and active bioactive molecules like antioxidants and enzymes etc from kinds of natural plants, 2 Day Diet enables both men and women to reduce fat at waist, abdomen, legs, arms, and face, etc.

Usually, users can get the difference in the first week and after using a month dosage, 10-15 pounds would be reduced, combined with a bit of exercise and balanced diet, the effect will be better, weight loss is no longer a hard thing with the help of 2-day diet Japan Lingzhi. According to statistics, about 92% of its users can more or less get success, it is hot especially in the United States, Mexico, and Asia, as long as you are not the one among unsuitable people, you can take it to be your helper.

Most of the things which are expensive yet trendy are prone to get copied and sold on the black market. The darker side is there is a hike in the production and sales of fake supplements in many countries. Fake 2 Day Diet Pill does not contain the six herbal ingredients but the illegal drug Sibutramine which according to Diabetes Care, sibutramine can harm cardiovascular health. The U.S. Food and Drug Administration (FDA) is recommending against continued prescribing and use of Sibutramine because this drug may pose unnecessary cardiovascular risks to patients.

FDA’s recommendation is based on new data from the Sibutramine Cardiovascular Outcomes (SCOUT) trial, which demonstrated a 16% increase in the risk of major adverse cardiovascular events (a composite of non-fatal heart attack, non-fatal stroke, resuscitation after cardiac arrest, and cardiovascular death) in patients treated with Sibutramine compared to patients taking a placebo (see Data Summary ). At the end of the trial (60 months), patients in the sibutramine group lost a small amount of body weight compared to patients in the placebo group. FDA has concluded that the risk for an adverse cardiovascular event from sibutramine in the population studied outweighed any benefit from the modest weight loss observed with the drug.

Unlike the fakes, Original natural 2 Day Diet Pill weight loss supplement contains all natural metabolism booster ingredients that work for women and men to lose stubborn body fat and sculpt your body without any harsh stimulants or artificial ingredients.

Dietary supplements are regulated by the Food and Drug Administration’s Center for Food Safety and Applied Nutrition, under the Dietary Supplement Health and Education Act of 1994, or DSHEA, which classifies dietary supplements as a special category of food. But US research suggests such supplements have caused “acute liver injury” in some people who took them regularly. And US government advice suggests they have “little or no effect” on weight loss.

The best way for consumers to protect themselves is to ensure that they’re purchasing a quality supplement that has a verified mark like USP. And that’s really important given the size and diversity of the products and ingredients and the rapid pace with which new dietary supplements are introduced into the market.

It’s also advisable for consumers to purchase the supplements from reputable outlets, whether it’s a retail store or the Internet. Because if you’re dealing with a reputable retailer, they’re going to be taking the necessary precautions to ensure that the products that they’re selling on their shelves are of good quality. Here are a few ways you can identify fake Original 2 Day Diet Pill from the original ones 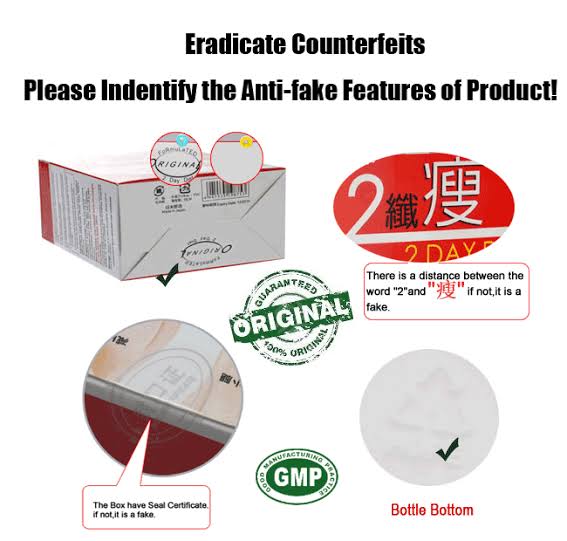 Fake 2 Day Diet Pills have some ingredients listed which aren’t actually in the original supplements. If something is extra in it or if something is missing then the supplement is fake.

The company provides services for verifying Lot numbers below the pack and in some, you can call their customer service center and tell them your lot number, check the authenticity of your product the fake ones would have the incorrect lot no. 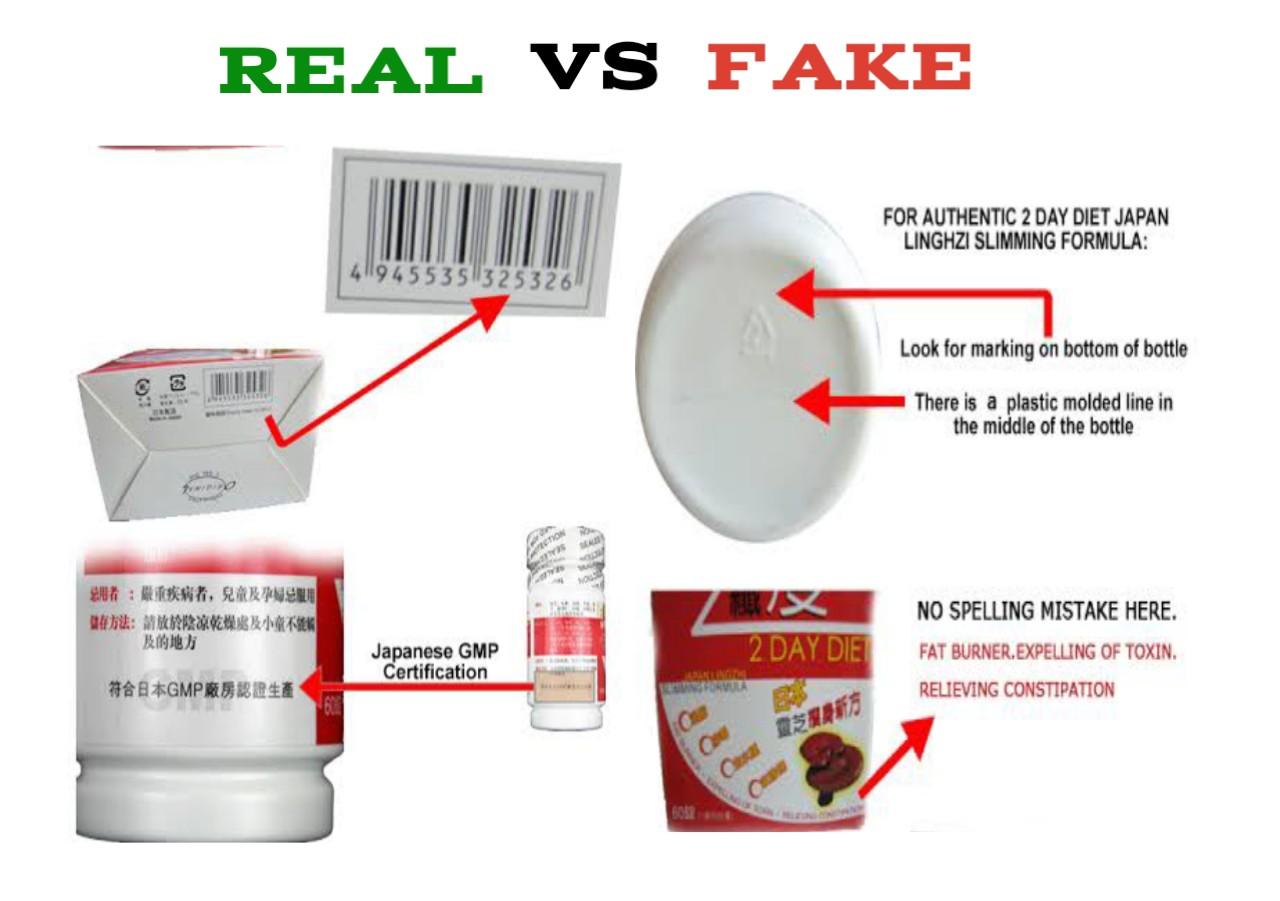 Fake Supplements Aren’t there to help you lose weight or improve your muscle mass, their focus is on making the smugglers rich! They not only have a tight effect on your pocket but also harm your Health! Fake 2 Day Diet Pills can do a lot of damage to your health.