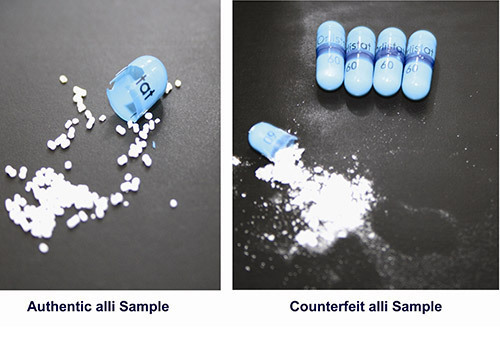 A counterfeit medication or a counterfeit drug is a medication or pharmaceutical product that is produced and sold with the intent to deceptively represent its origin, authenticity, or effectiveness. Alli is an over-the-counter (OTC) diet pill approved by the U.S. Food and Drug Administration (FDA). It is the brand name for a medication called orlistat, which is perhaps better known by its prescription version’s name Xenical. Alli is FDA-approved for use in overweight adults along with a reduced-calorie, low-fat diet and exercise. The diet pill is not an easy fix for weight loss, but it may help some people lose more weight and improve their health than lifestyle changes alone.

Alli (orlistat) is a lipase inhibitor. It works by preventing your body from absorbing some of the fat that is in your food. You take the medication before each meal and it works in your intestines to remove about 25 percent of the fat consumed.

Excess fat is eliminated from your body in your stool. But that doesn’t mean you can indulge in fatty foods when you take Alli. The medication should only be used while you’re eating a balanced, low-calorie, and low-fat diet. That means that you’ll eat less than 30 percent of your total daily calories from fat and limit fat to 15 grams per meal. Alli contains 60 mg of orlistat, while Xenical contains 120 mg of the drug and requires a prescription from your healthcare provider.

When researchers studied weight loss with orlistat, the results were mixed. For example, in one study cited by GlaxoSmithKline (the company that makes Alli), the medication helped 26 patients lose 5.6 percent of their total body weight in three months. However, in another published study, researchers followed more than 100,000 orlistat users for three years. They found that although patients lost about 2 pounds per month in the first few months, they did not maintain significant weight loss over the long term.

The World Health Organization defines counterfeit drugs as one which is deliberately and fraudulently mislabelled with respect to identifying and/or source.  A counterfeit medication or pharmaceutical product is produced or sold with the intent to deceptively represent its origin authenticity or effectiveness. GlaxoSmithKline the manufacturer of Alli diet pills recently revealed that the fakes contained none of the active ingredient, orlistat. Instead, the counterfeits contained the controlled substance sibutramine, an appetite suppressant.

The FDA warned consumers that fake versions of the drug are being sold, mainly on online auction sites. Testing shows that the counterfeit pills contain excessive amounts of sibutramine, a prescription drug and controlled substance that can place people with cardiovascular disease at risk for higher blood pressure, heart attack or stroke, said Janet Woodcock, director of the FDA Center for Drug Evaluation and Research. The fake pills contain at least twice as much sibutramine as would normally be recommended, she said.

“Unfortunately, many people with high blood pressure or heart disease are trying to improve their health by losing weight, and we are concerned that such individuals might be exposed to the counterfeit.

Firstly, check that the website that you are purchasing from is fully accredited and has the Registered Pharmacy logo on their site. This shows that the website is registered with the relevant authorities. This goes a long way to showing that they are a reputable company to purchase medications from. According to  GlaxoSmithKline, consumers should watch for these signs in determining whether the product they are buying is fake:

So once the product arrives there are a number of things to look out for.

Fake Alli is sometimes missing a LOT number on the side of the box. This should be a 7 digit number that shows the batch of Alli they the box was produced with.

Genuine Alli capsules contain small white pellets, as seen below, while a large number of fake tablets contain a white powder instead.

According to the National Institutes of Health, the most common side effects of authentic Alli involve changes to your bowel movements. They range from gas and loose or oily stool to stomach cramps, oily spotting on your underwear, and difficulty controlling your bowel movements.

Many Alli users who complain about side effects experience them in response to eating a high-fat meal, but even with a careful diet, some users can have problems.

Side effects generally subside after the first few weeks of taking the pill. If Alli side effects continue beyond that point, talk to your doctor.

In addition to side effects, Alli may be harmful to your liver. In 2010, the FDA updated its requirements for the labeling of orlistat products to include safety information about a few cases of severe liver injury linked to the weight-loss pill. If you have a pre-existing liver condition or experience jaundice, severe itching, or dark urine, see your doctor.

As with all medications, take caution to purchase Alli from a reputable vendor and check the package closely before taking a pill. In 2014, product tampering was reported and resulted in a voluntary recall of the diet pills. Alli came back on the market with an updated package that makes it easier to see if the bottle has been opened.

Is It Right for You?

If you are thinking about taking Alli for weight loss, talk to your doctor. While a prescription is not required, you should not take orlistat if you have any of the following diagnoses:

Your doctor is the best person to determine if the product is safe for you and how losing weight might improve your health.