How to Spot a Fake Humira Pen 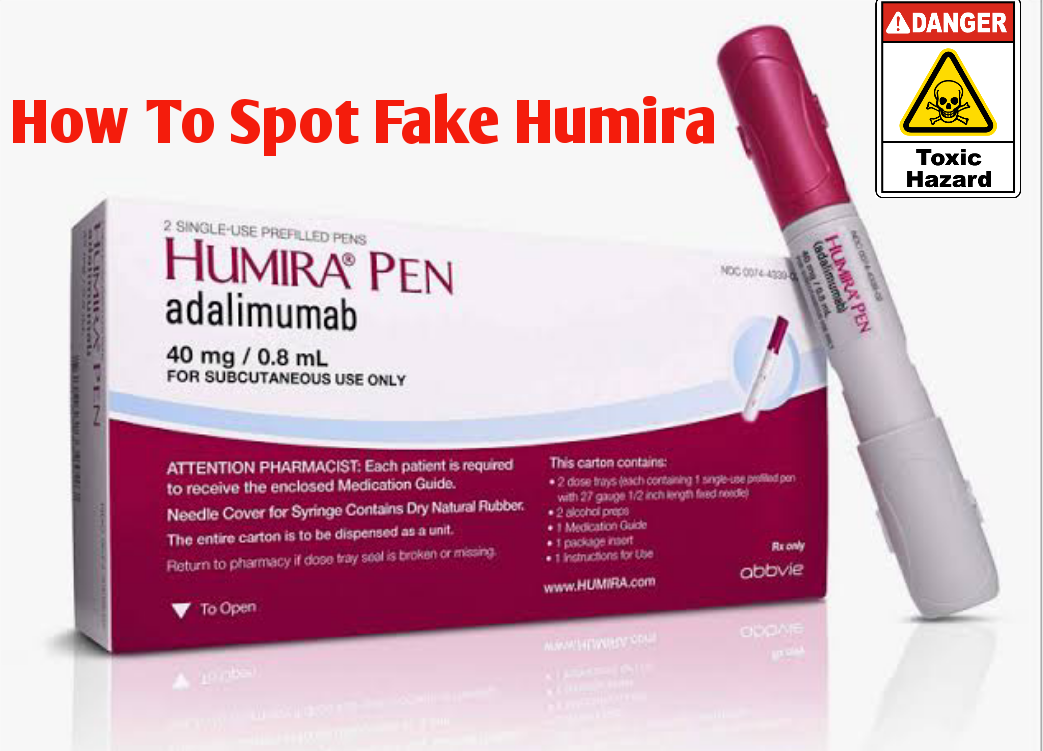 The word HUMIRA stands for HUman Monoclonal Antibody In Rheumatoid Arthritis. The medication Humira (adalimumab) is a prescription drug that comes as an injectable solution. It’s not available in a generic form. Humira comes as an injection you give yourself. It’s available as a pen injection and an injectable prefilled syringe. It is used to reduce inflammation in a variety of conditions. These include some types of arthritis, ankylosing spondylitis, Crohn’s disease, and ulcerative colitis. They also include plaque psoriasis, hidradenitis suppurativa, and some types of uveitis. A new biosimilar to adalimumab, named adalimumab-adaz, was approved by the FDA on October 31, 2018. This biosimilar is known as Hyrimoz, and is a trademark of Novartis AG.

“The European patents of Avbbie expired in October 2018, opening the door to biosimilars on the European market. In the US, the patent exclusivity runs to 21 January 2023 so Humira biosimilars from Amgen (Abjevita) and Samsung Bioepis (Imraldi) will not hit this market until then. In Europe, when the patents for biologics Enbrel and Remicade expired, there was a resulting decrease of 10%-15% in the cost of therapy, a trend which Humira will likely mirror.” Although physicians have expressed concern about the safety of biosimilars, Amgen is respected for its industry manufacturing ‘know-how’ in both oncology and immunology, which may boost physician confidence in prescribing their Humira biosimilar.

However, as with many many noble drugs counterfeiting will always remain a big issue especially where generics are not available. The traffic in counterfeit drugs poses a grave threat to all people everywhere. According to some estimates, more than 10 percent of all pharmaceuticals in the global supply chain are counterfeit. In some countries, fake pharmaceuticals account for 70 percent of all drugs in the supply chain.

Counterfeit medicines are products deliberately and fraudulently manufactured to be mistaken for legitimate drugs. In the words of the U.S. Food and Drug Administration, counterfeit medicine is fake medicine—pure and simple. One organization, the Center for Medicine in the Public Interest, estimates that global sales of counterfeit drugs total $75 billion every year. That figure has almost doubled since 2005.  (The worldwide total was estimated at $320 billion.)

Counterfeit drugs are not only widespread but dangerous. One recent article in a medical journal likened the counterfeiting of drugs to murder. People die as the result of taking diluted drugs, drugs with fake ingredients, or legitimate drugs that are repackaged after their expiration date with fake labeling that indicates they are still useful. The U.S. Food and Drug Administration lists the following threats to health caused by counterfeit drugs:

Toxic effects: Counterfeit drugs contain ingredients that, if ingested or injected, can cause health problems.

Unintended effects: Some counterfeits are presented as substitutes for other drugs.

Ineffective treatments: Some fake drugs contain some active ingredients, but are sub-potent. Sub-potent drugs are especially dangerous in the treatment of illnesses

No active ingredients. Some drugs are just chalk or water.

Most people who use counterfeit or compromised medications never find out about it. If they have an adverse reaction or don’t get well, they rarely imagine a counterfeit drug may have been the cause. How many people are harmed or killed by suspect drugs? No one knows. According to Bruce Foucart, director of the National Intellectual Property Rights Coordination Center, which was established in 1999 to fight counterfeiting, “It’s very difficult to prove” even when a person dies. “Unless a complete autopsy was done, we will never know the answer.”

How To Identify a Genuine  Humira

Recently, a parallel importer in Germany discovered counterfeits of Humira in the German supply chain. The fakes seem to originate in Poland and Turkey and bear a falsified batch number that has never been used by AbbVie. The fraudulent batch number (4249XD18) was found on 40mg Humira pre-filled syringes bearing an expiry date of May 2016, according to information supplied by Germany’s Paul Ehrlich Institute (PEI).

The batch number on the secondary packaging did not also match that on the primary blisters, which have two labels, one stuck over the other. The top label has another false number (42497XD18) while those underneath had Turkish lettering and six different (authentic) lot numbers.

Lab testing has shown that the contents of the syringe was adalimumab in the correct dose, indicating that this may be a case of diversion or potentially some other form of falsification such as fraudulently extending an expiry date, although this has not yet been confirmed. AbbVie said certificates accompanying the shipment were also forgeries.

Visual inspection as stated by the World Health Organization (WHO) (1999) still remains the first step in identifying potential fake drugs irrespective of the analytical methods used. This is because such observation serves as a lead to identifying fake products even in the absence of the knowledge of the physical characteristics of a genuine drug product. You are expected to examine carefully both the package and its content before purchase or use. The following simple steps will help you spot  a fake or counterfeit Humira:

#1 The batch number on the secondary packaging must always match that on the primary blisters.

#2 Examine the package and check if it appears suspicious or different from what you previously know.

#3 Check if the security seal has been tampered with by looking for breaks or tears in the sealing tape and seals.

#5 Check the legibility of the information on both the primary and secondary packages.

#6 Check if the batch number, expiry date, and manufacturer’s address on the secondary package are the same as that on the primary package.

#7 Check if the manufacturer’s address is traceable, that is if it contains the exact location of the company and not just the country address.

In an autoimmune disease, the body’s immune system falsely detects and attacks a threat within the body that does not really exist. This can lead to a number of problems and conditions, including rheumatoid arthritis, psoriatic arthritis, ankylosing spondylitis, Crohn’s disease, and psoriasis. Experts are unsure exactly what causes autoimmune diseases, but tumor necrosis factor alpha (TNFα) appears to be a major contributor to inflammation in these diseases.

TNFα triggers inflammation when the body is under threat, and the immune system goes into action to protect it. However, too much TNFα can attack healthy tissue and cause inflammation. Inflammation can lead to pain. Humira binds to TNFα and blocks its inflammatory effect. This reduces pain and inflammation in people with autoimmune diseases.

How is HUMIRA used?

HUMIRA should be administered under the guidance of a specialist doctor having experience in managing Rheumatological Disorders.

If the patient develops certain serious side effects then the doctor may interrupt or stop treatment, or reduce the dose. See the summary of product characteristics on the company’s official website for more information.

HUMIRA can cause serious side effects, including:

Call your doctor or get medical care right away if you develop any of the above symptoms.

Remember, tell your doctor right away if you have an infection or symptoms of an infection, including:

There are a thousand and one counterfeit, gray and substandard drugs in the market today; and the negative impacts of these drugs know no boundaries. Drugs are poisons and care must be taken to avoid fake ones. The tips discussed in this article will not only help reduce your chances of purchasing, using, and suffering the untoward effects of fake drug products but will also save you some money. You can contribute your quota to fighting the war against counterfeit drugs by sharing this information. Let us know your thoughts in the comment section.

See:  How to Spot An M 30 Blue Oxycodone Pill Fake

How To Travel With Humira Pen

How To Spot an IP 204 fake
How to spot fake HumiraHumira
October 30, 2019 Family & Community HealthPublic HealthLeave a comment