How To Get Rid Of Gypsy Moth and Their Caterpillars Gypsy moth is the common name for a type of tussock moth, Lymantria dispar that is native to Europe and Asia but has become a serious pest in North America after its introduction in the 19th century. In their natural environment, where gypsy moths have developed in harmony with numerous predators, they are part of the balance of nature. They serve as prey species for such animals as predatory and parasitic insects (wasps, ground beetles, etc.), spiders, birds, and mammals such as mice, shrews, and squirrels.

The gypsy moth was introduced in 1868 into the United States by Étienne Léopold Trouvelot, a French scientist living in Medford, Massachusetts. Because native silk-spinning caterpillars were susceptible to disease, Trouvelot imported the species in order to breed a more resistant hybrid species. Some of the moths escaped, found suitable habitats, and began breeding.

However, the introduction of gypsy moths has proven to be very destructive, with millions of acres of trees defoliated, including both evergreen and deciduous trees, and many trees weakened or killed by repeat infestations. Over one million acres (4,000 km²) of forest each year were defoliated between 1980 and 1991, and in 1981 almost 13 million acres were defoliated (52,200 km²) (McManus et al. 1992). There remain important North American predators, some of which are drawn to infestations. Nonetheless, this introduction remains a significant threat, with concern about spreading to new areas, and outbreaks requiring a massive amount of money and effort to contain. Awareness of such problems, however, has led to greater quarantine laws and efforts to restrict the introduction of invasive species between nations. 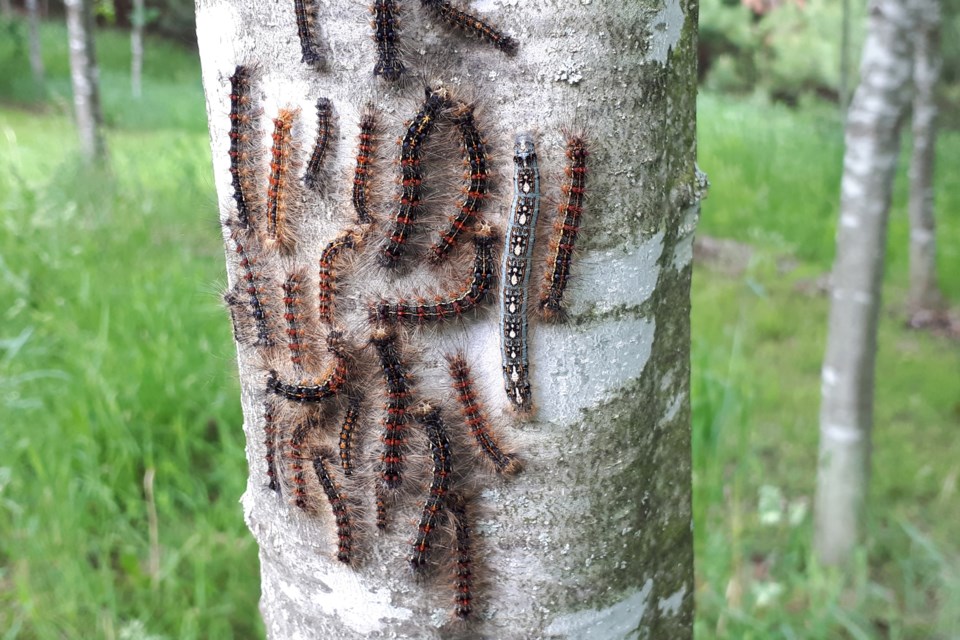 How To Get Rid Of Gypsy Moth and their Caterpillars

Management Gypsy moth outbreaks may last from 1 to 3 years, with about 10 years between outbreaks. It’s unclear what triggers a population explosion, but they always eventually collapse as a result of natural causes. However, until populations crash, homeowners can use a variety of strategies to limit damage and nuisance problems. It’s important to remember that not all tree defoliation is the work of gypsy moths. Gypsy moth caterpillars never build tents or nests.

So if you see a webbed tent or nest near a defoliated area, another pest is involved. Before selecting a management strategy, be sure to correctly identify the pest. Trees that are defoliated will recover more quickly if they receive adequate water. Irrigate affected trees for about an hour each week unless there’s been a good soaking rain. Continue watering through the end of August. Avoid fertilizing trees for the remainder of the growing season. Nitrogen stresses the tree by encouraging the growth of leaves at the expense of food reserves stored in the roots. Lawn fertilizers are another source of nitrogen and should not be used until late October.

WINTER (mid-October until mid-April): Destroy egg masses to help reduce the number of caterpillars next spring. Spray with Golden Pest Spray Oil or scrape off and kill the egg masses by microwaving for 2 minutes or by submerging in soapy water for 2 days. Killed eggs may be thrown out in the trash.

LATE APRIL: Place barrier bands on tree trunks. Barrier bands will prevent caterpillars from climbing back into trees after they have tried to disperse or when they have fallen. Barrier bands can be purchased or made using duct tape or other nonporous material that can be wrapped around a tree trunk (silver side out) and coated with a commercially available sticky material such as TangleFoot®. Never put sticky material directly on the tree trunk. On thin-barked trees such as birch, tie butcher paper or paper bags tightly around the trunk before using duct tape. The sticky material may need to be re-applied periodically due to rain and other environmental conditions as well as when the bands are covered with caterpillars.

EARLY JUNE: Replace barrier bands with cloth collection bands. Collection bands can be made from medium-weight dark cloth or burlap approximately 12–18 inches wide and long enough to completely wrap around a tree in a wide belt. Tie a piece of cord or twine around the middle of the cloth band at chest height on the tree. Fold the top half of the cloth down to cover the bottom half Bob Queen. Older caterpillars are attracted to these “skirts” when looking for a place to hide during the day. Remove and destroy the caterpillars each day by scraping them into a bucket of soapy water.

Sanitation. Remove items such as dead branches and stumps that protect gypsy moth caterpillars and pupae from predators.

Biological pesticides. The most common treatment used against gypsy moths is a spray of Bacillus thuringiensis, commonly called Bt. This bacterial insecticide kills caterpillars that eat it within a week of its application. Bt is found naturally in soil and degrades within a week when exposed to sunlight. The variety of Bt used against the gypsy moth only affects caterpillars of moths and butterflies. Bt has no effect on animals, birds, people, or even other insects. It is sold under various labels (Bactur, Dipel, Foray, and Thuricide, to name a few). Bt must be applied to trees in May when caterpillars are less than 1 ⁄2 inch long. Timing is critical as Bt is significantly less effective on older caterpillars.

Chemical insecticides. Numerous insecticides are registered against the gypsy moth. Many products are available at your local garden center or nursery. Check the label to make sure gypsy moths are listed. If you elect to use a chemical insecticide, consider the potential impact on beneficial insects and natural enemies such as predators, parasites, and honeybees. To help you decide which pesticide is always read and precisely follow the label directions. Many trees will be too tall for a homeowner to treat effectively, in these cases, hire a certified arborist.

How to Use Pesticides Safely