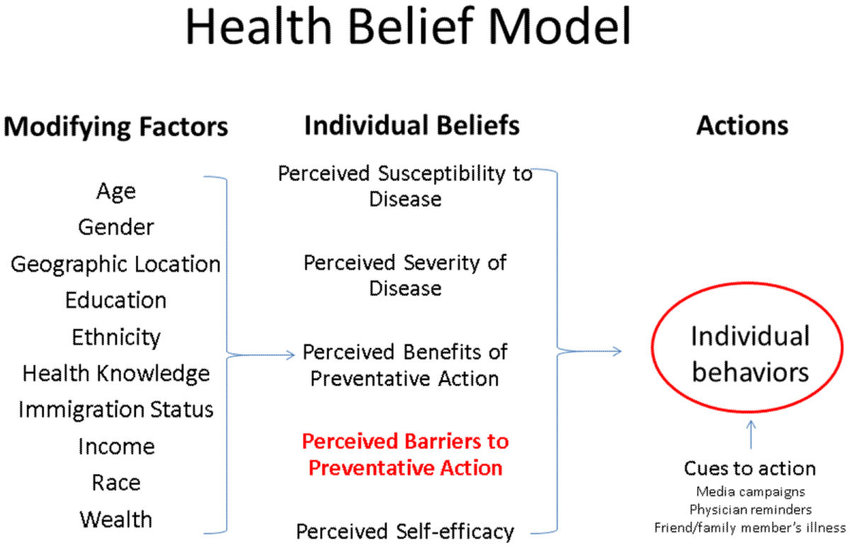 The Health Belief Model (HBM) posits that messages will achieve optimal behavior change if they successfully target perceived barriers, benefits, self-efficacy, and threats. It is one of the most widely used conceptual frameworks for understanding health behavior. Developed in the early 1950s, the model has been used with great success for almost half a century to promote greater condom use, seat belt use, medical compliance, and health screening use, to name a few behaviors.

The HBM is based on the understanding that a person will take a health-related action (i.e., use condoms) if that person:

The Health Belief Model is a framework for motivating people to take positive health actions that uses the desire to avoid a negative health consequence as the prime motivation. For example, HIV is a negative health consequence, and the desire to avoid HIV can be used to motivate sexually active people into practicing safe sex. Similarly, the perceived threat of a heart attack can be used to motivate a person with high blood pressure into exercising more often.

It’s important to note that avoiding a negative health consequence is a key element of the HBM. For example, a person might increase exercise to look good and feel better. That example does not fit the model because the person is not motivated by a negative health outcome — even though the health action of getting more exercise is the same as for the person who wants to avoid a heart attack.

The HBM can be an effective framework to use when developing health education strategies. A large research study reviewed 46 studies of HBM-based prevention programs published between 1974 and 1984. The HBM-based programs focused on a variety of health actions. The results of the meta-analysis provided substantial empirical support for the efficacy of the HBM. For more information on this study, consult “The Health Belief Model and Personal Health Behavior” (Becker, 1974).

What Are The Major Concepts Of the Health Belief Model?

HBM is based on six key concepts. The following table, excerpted with minor modifications from “Theory at a Glance: A Guide for Health Promotion Practice” (1997), presents definitions and applications for each of the six key concepts. Examples of the concepts as they apply to sexuality education are presented after this table.

For examples of what the six key concepts look like when applied to two sexual health actions, review the following table:

What Are Some Example Of the Health Belief Model?

The Michigan Model for Health™ is a curriculum designed for implementation in schools. It targets social and emotional health challenges including nutrition, physical activity, alcohol and drug use, safety, and personal health, among other topics. This model adapts components of the Health Belief Model related to knowledge, skills, self-efficacy, and environmental support.

How is the Health Belief Model applied?

These actions represent key elements of the Health Belief Model and can be used to design or adapt health promotion or disease prevention programs. The Health Belief Model is appropriate to be used alone or in combination with other theories or models. To ensure success with this model, it is important to identify “cues to action” that are meaningful and appropriate for the target population.

What Are The Limitations Of The Health Belief Model?

The HBM is more descriptive than explanatory and does not suggest a strategy for changing health-related actions. In preventive health behaviors, early studies showed that perceived susceptibility, benefits, and barriers were consistently associated with the desired health behavior; perceived severity was less often associated with the desired health behavior. The individual constructs are useful, depending on the health outcome of interest, but for the most effective use of the model, it should be integrated with other models that account for the environmental context and suggest strategies for change. ALSO READ: Who developed the social cognitive theory?

What Is Social Cognitive Theory?