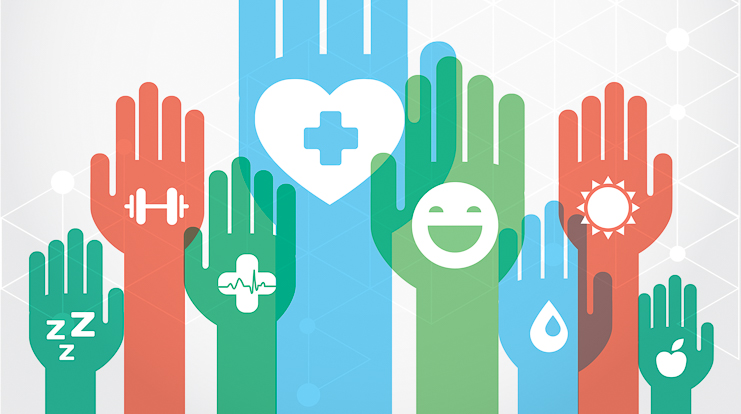 Public health is a multi-disciplinary field that aims to 1) prevent disease and death, 2) promote a better quality of life, and 3) create environmental conditions in which people can be healthy by intervening at the institutional, community, and societal levels.

Whether public health practitioners can achieve this mission depends upon their ability to accurately identify and define public health problems, assess the fundamental causes of these problems, determine populations most at-risk, develop and implement theory- and evidence-based interventions, evaluate and refine those interventions to ensure that they are achieving their desired outcomes without unwanted negative consequences.

To be effective in these endeavors, public health practitioners must know how to apply the basic principles, theories, research findings, and methods of the social and behavioral sciences to inform their efforts.   A thorough understanding of theories used in public health, which are mainly derived from the social and behavioral sciences, allows practitioners to:

Note: This module has been translated into Estonian by Marie Stefanova. The translation can be accessed at

After successfully reviewing these modules, students will be able to:

The Health Belief Model (HBM) was developed in the early 1950s by social scientists at the U.S. Public Health Service in order to understand the failure of people to adopt disease prevention strategies or screening tests for the early detection of disease. Later uses of HBM were for patients’ responses to symptoms and compliance with medical treatments. The HBM suggests that a person’s belief in a personal threat of an illness or disease together with a person’s belief in the effectiveness of the recommended health behavior or action will predict the likelihood the person will adopt the behavior.

The HBM derives from psychological and behavioral theory with the foundation that the two components of health-related behavior are 1) the desire to avoid illness, or conversely, get well if already ill; and, 2) the belief that a specific health action will prevent, or cure, illness. Ultimately, an individual’s course of action often depends on the person’s perceptions of the benefits and barriers related to health behavior. There are six constructs of the HBM. The first four constructs were developed as the original tenets of the HBM. The last two were added as research about the HBM evolved.

Limitations of the Health Belief Model

The HBM is more descriptive than explanatory and does not suggest a strategy for changing health-related actions. In preventive health behaviors, early studies showed that perceived susceptibility, benefits, and barriers were consistently associated with the desired health behavior; perceived severity was less often associated with the desired health behavior. The individual constructs are useful, depending on the health outcome of interest, but for the most effective use of the model, it should be integrated with other models that account for the environmental context and suggest strategies for change.

The Theory of Planned Behavior

The Theory of Planned Behavior (TPB) started as the Theory of Reasoned Action in 1980 to predict an individual’s intention to engage in a behavior at a specific time and place. The theory was intended to explain all behaviors over which people have the ability to exert self-control. The key component of this model is behavioral intent; behavioral intentions are influenced by the attitude about the likelihood that the behavior will have the expected outcome and the subjective evaluation of the risks and benefits of that outcome.

The TPB has been used successfully to predict and explain a wide range of health behaviors and intentions including smoking, drinking, health services utilization, breastfeeding, and substance use, among others. The TPB states that behavioral achievement depends on both motivation (intention) and ability (behavioral control). It distinguishes between three types of beliefs – behavioral, normative, and control. The TPB is comprised of six constructs that collectively represent a person’s actual control over the behavior.

Limitations of the Theory of Planned Behavior

There are several limitations of the TPB, which include the following:

The TPB has shown more utility in public health than the Health Belief Model, but it is still limiting in its inability to consider environmental and economic influences. Over the past several years, researchers have used some constructs of the TPB and added other components from behavioral theory to make it a more integrated model. This has been in response to some of the limitations of the TPB in addressing public health problems.

Diffusion of Innovation (DOI) Theory, developed by E.M. Rogers in 1962, is one of the oldest social science theories. It originated in communication to explain how, over time, an idea or product gains momentum and diffuses (or spreads) through a specific population or social system. The end result of this diffusion is that people, as part of a social system, adopt a new idea, behavior, or product.   Adoption means that a person does something different from what they had previously (i.e., purchase or use a new product, acquire and perform a new behavior, etc.). The key to adoption is that the person must perceive the idea, behavior, or product as new or innovative. It is through this that diffusion is possible.

Limitations of Diffusion of Innovation Theory

There are several limitations of Diffusion of Innovation Theory, which include the following:

This theory has been used successfully in many fields including communication, agriculture, public health, criminal justice, social work, and marketing. In public health, the Diffusion of Innovation Theory is used to accelerate the adoption of important public health programs that typically aim to change the behavior of a social system. For example, an intervention to address a public health problem is developed, and the intervention is promoted to people in a social system with the goal of adoption (based on Diffusion of Innovation Theory). The most successful adoption of a public health program results from understanding the target population and the factors influencing their rate of adoption.

For more on the diffusion of innovation theory, see “On the Diffusion of Innovations: How New Ideas Spread” by Leif Singer.

Social Cognitive Theory (SCT) started as the Social Learning Theory (SLT) in the 1960s by Albert Bandura. It developed into the SCT in 1986 and posits that learning occurs in a social context with a dynamic and reciprocal interaction of the person, environment, and behavior. The unique feature of SCT is the emphasis on social influence and its emphasis on external and internal social reinforcement.   SCT considers the unique way in which individuals acquire and maintain behavior, while also considering the social environment in which individuals perform the behavior. The theory takes into account a person’s past experiences, which factor into whether behavioral action will occur. These past experiences influences reinforcements, expectations, and expectancies, all of which shape whether a person will engage in specific behavior and the reasons why a person engages in that behavior.

Many theories of behavior used in health promotion do not consider the maintenance of behavior, but rather focus on initiating behavior. This is unfortunate as maintenance of behavior, and not just initiation of behavior, is the true goal in public health. The goal of SCT is to explain how people regulate their behavior through control and reinforcement to achieve goal-directed behavior that can be maintained over time. The first five constructs were developed as part of the SLT; the construct of self-efficacy was added when the theory evolved into SCT.

There are several limitations of SCT, which should be considered when using this theory in public health. Limitations of the model include the following:

Social Cognitive Theory considers many levels of the social-ecological model in addressing behavior change of individuals. SCT has been widely used in health promotion given the emphasis on the individual and the environment, the latter of which has become a major point of focus in recent years for health promotion activities. As with other theories, the applicability of all the constructs of SCT to one public health problem may be difficult, especially in developing focused public health programs.

The Transtheoretical Model (Stages of Change)

The Transtheoretical Model (also called the Stages of Change Model), developed by Prochaska and DiClemente in the late 1970s, evolved through studies examining the experiences of smokers who quit on their own with those requiring further treatment to understand why some people were capable of quitting on their own. It was determined that people quit smoking if they were ready to do so. Thus, the Transtheoretical Model (TTM) focuses on the decision-making of the individual and is a model of intentional change. The TTM operates on the assumption that people do not change behaviors quickly and decisively. Rather, change in behavior, especially habitual behavior, occurs continuously through a cyclical process. The TTM is not a theory but a model; different behavioral theories and constructs can be applied to various stages of the model where they may be most effective.

The TTM posits that individuals move through six stages of change: pre-contemplation, contemplation, preparation, action, maintenance, and termination. Termination was not part of the original model and is less often used in the application of stages of change for health-related behaviors. For each stage of change, different intervention strategies are most effective at moving the person to the next stage of change and subsequently through the model to maintenance, the ideal stage of behavior. 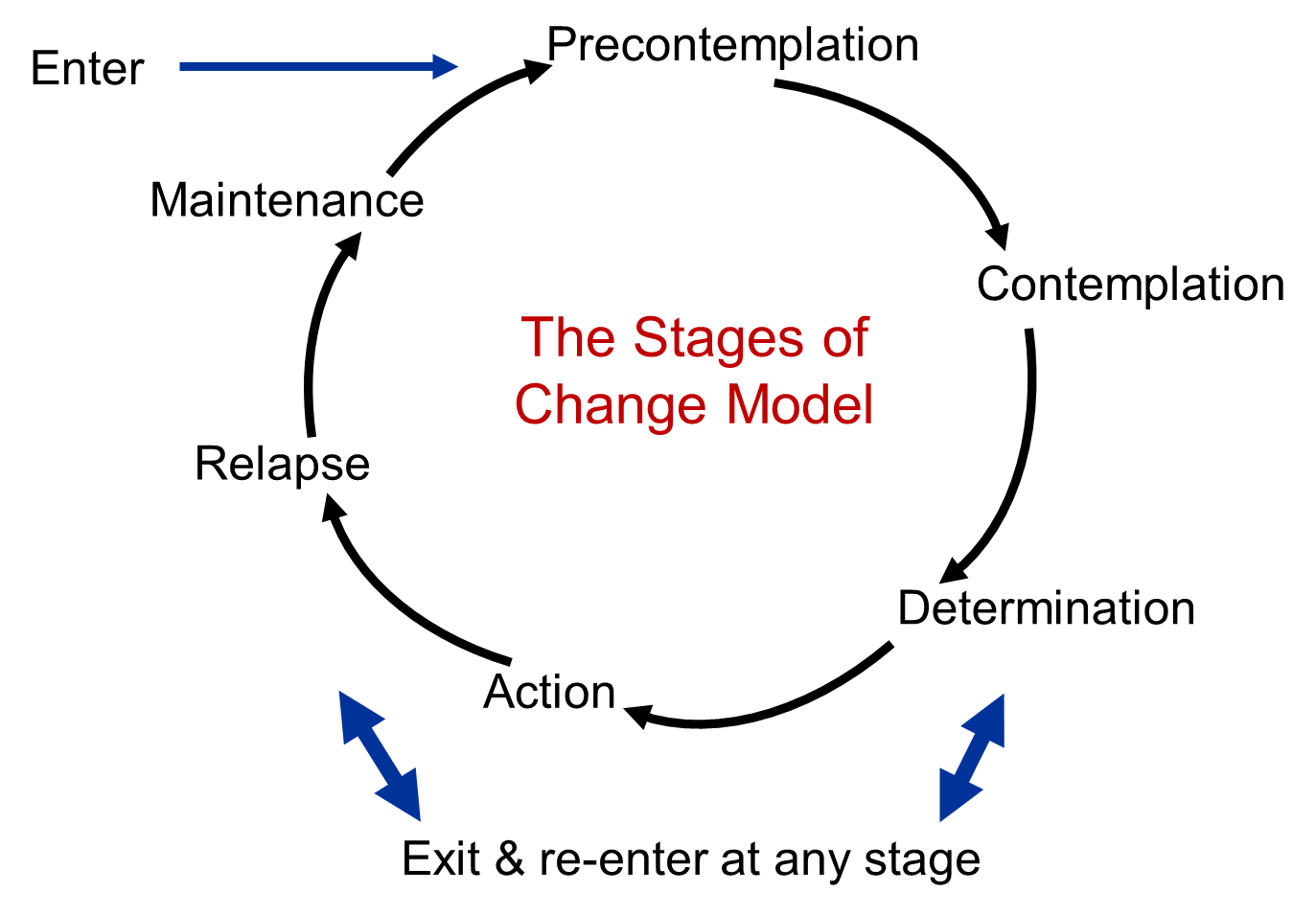 To progress through the stages of change, people apply cognitive, affective, and evaluative processes. Ten processes of change have been identified with some processes being more relevant to a specific stage of change than other processes. These processes result in strategies that help people make and maintain change.

Limitations of the Transtheoretical Model

There are several limitations of TTM, which should be considered when using this theory in public health. Limitations of the model include the following:

The Transtheoretical Model provides suggested strategies for public health interventions to address people at various stages of the decision-making process. This can result in interventions that are tailored (i.e., a message or program component has been specifically created for a target population’s level of knowledge and motivation) and effective. The TTM encourages an assessment of an individual’s current stage of change and accounts for relapse in people’s decision-making process.

The Social Norms Theory was first used by Perkins and Berkowitz in 1986 to address student alcohol use patterns. As a result, the theory, and subsequently the social norms approach, is best known for its effectiveness in reducing alcohol consumption and alcohol-related injury in college students. The approach has also been used to address a wide range of public health topics including tobacco use, driving under the influence prevention, seat belt use, and more recently sexual assault prevention. The target population for social norms approaches tends to be college students but has recently been used with younger student populations (i.e., high school).

This theory aims to understand the environment and interpersonal influences (such as peers) in order to change behavior, which can be more effective than a focus on the individual to change behavior. Peer influence, and the role it plays in individual decision-making around behaviors, is the primary focus of Social Norms Theory. Peer influences and normative beliefs are especially important when addressing behaviors in youth. Peer influences are affected more by perceived norms (what we view as typical or standard in a group) rather than by the actual norm (the real beliefs and actions of the group). The gap between perceived and actual is a misperception, and this forms the foundation for the social norms approach.

There are several limitations of Social Norms Theory that needs to be considered prior to using the theory. Limitations of the theory include the following:

What Is Social Cognitive Theory?