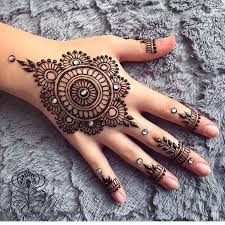 Recent years have seen a rise in the popularity of temporary tattoos, which is likely to have been driven by a change in societal views. Lalle design also known as henna plays a vital role in the northern part of Nigeria, it is a special natural essential used in beautifying the body. This traditional practice has been in existence for decades mostly in the northern region, even though history has it that it came from North Africa during the slave trade. This act of beautifying the skin with lalle is popular among the Hausa, Fulani, and Kanuri cultures. “The Lalle” which is a form of traditional tattoo is used to design the arms, hands, and legs, it is not permanent and this type of tattoo can last from a few weeks to a month.

However, the introduction of synthetic lalle, as well as some deleterious inks into lalle design, is threatening to make the practice a nightmare and a public health challenge due to the increased rate of lalle or tattoo allergy. Lalle ink contains several ingredients and chemicals, and you may be allergic to any one of them. Substances like iron oxide, mercury sulfide, ferric hydrate, aluminum, and manganese are only a few of the ingredients that may be included in the ink, depending on the color. Some inks now contain dyes made from the same components used in car paint and commercial printing. These can all stimulate an immune response as your body attempts to remove the ink as if it’s a foreign invader. An allergy to any of these substances can cause an allergic reaction once the ink gets into your skin. The tattoo ink can potentially cause an allergic reaction. A tattoo allergy can result in swelling, irritation, a rash, or some other skin abnormality at or around the site of the tattoo.

There is an increase in the rate of reports to some lalle inks in the market which has been traced to some components of the inks. Social media reports indicate that to some people simply touching the ink was enough to trigger an allergic reaction. More and more people are having skin reactions to this “black henna” due to the toxic dye used, known as para-phenylenediamine (PPD). When used by itself, PPD stains skin a very dark black within two hours that easily lasts up to two weeks. PDD in concentrations may lead to blistering, painful skin burns, and scarring, putting the long-term integrity of the user’s skin at risk. A survey conducted by the British Skin Foundation in 2015 suggested that 40% of dermatologists (244 respondents) had seen skin reactions to temporary black henna lalle tattoos.

Signs of a Lalle or Henna Allergy

The contact allergic reaction usually appears in the pattern of the tattoo 7–14 days after first exposure. In someone already sensitized to PPD due to earlier exposure to the chemical, the reaction develops within 48 hours. Most people develop an allergy to a specific color of ink, but any color can cause an allergic reaction. When this happens, you may notice one or more of the following in only one color of ink: redness and swelling, itch, small pimple-like bumps, raised, scaly patches, deep lumps, blisters, skin crusts or flakes off, a watery fluid leaking from the area.

How to treat Lalle or Henna Allergy

Treatment generally involves the use of

Sometimes oral corticosteroids are required for generalized rash. This medication is used to provide relief for inflamed areas of the body. They lessen swelling, redness, itching, and allergic reactions. They are often used as part of the treatment for a number of different diseases, such as severe allergies or skin problems, asthma, or arthritis.

Antibiotics may be prescribed for the pustular form, although the pustules may be sterile and continue to extend despite antibiotics. A pustule is a bulging patch of skin that’s full of a yellowish fluid called pus.

Antihistamines are drugs that act by blocking the effects of histamines, this class of drugs can treat allergies and many other ailments. They may be prescribed to reduce the itch. See: How To Remove Lalle From Your Skin