Examples of Natural Hazards and Disasters 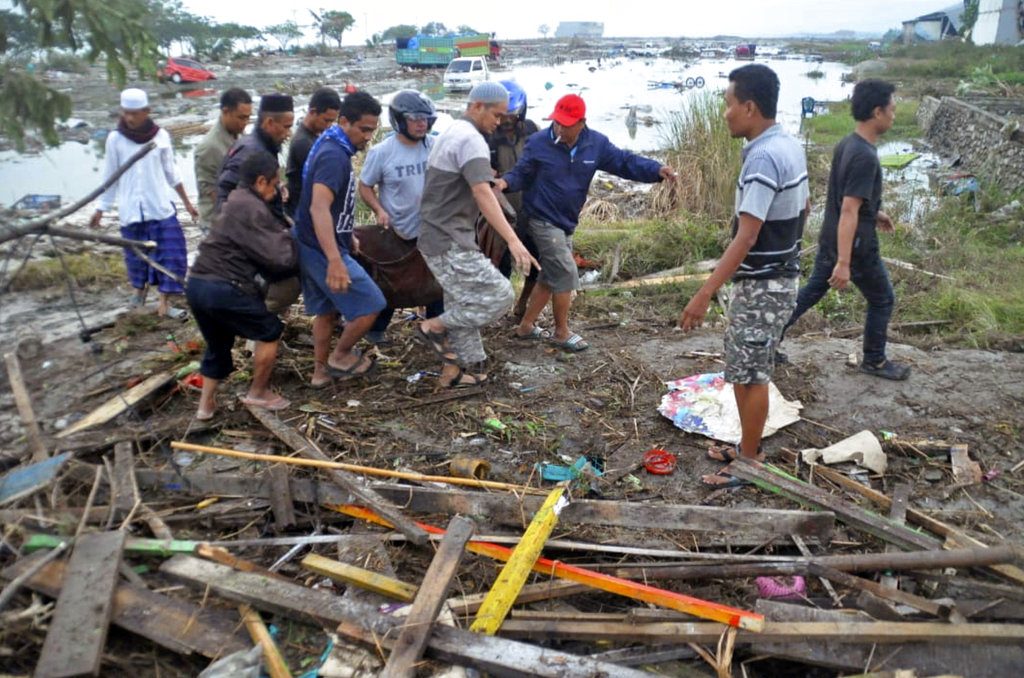 Earthquakes are caused by the sudden release of slowly accumulated strain energy along a fault in the earth’s crust, Earthquakes and volcanoes occur most commonly at the collision zone between tectonic plates. Earthquakes represent a particularly severe threat due to the irregular time intervals between events, lack of adequate forecasting, and the hazards associated with these:

– Ground shaking is a direct hazard to any structure located near the earthquake’s center. Structural failure takes many human lives in densely populated areas.

– Faulting, or breaches of the surface material, occurs as the separation of bedrock along lines of weakness.

– Landslides occur because of ground shaking in areas having relatively steep topography and poor slope stability.

– Liquefaction of gently sloping unconsolidated material can be triggered by ground shaking. Rows and lateral spreads (liquefaction phenomena) are among the most destructive geologic hazards.

– Subsidence or surface depressions result from the settling of loose or unconsolidated sediment. Subsidence occurs in waterlogged soils, fill, alluvium, and other materials that are prone to settle.

– Tsunamis or seismic sea waves, usually generated by seismic activity under the ocean floor, cause flooding in coastal areas and can affect areas thousands of kilometers from the earthquake center.

Volcanoes are perforations in the earth’s crust through which molten rock and gases escape to the surface. Volcanic hazards stem from two classes of eruptions:

– Explosive eruptions which originate in the rapid dissolution and expansion of gas from the molten rock as it nears the earth’s surface. Explosions pose a risk by scattering rock blocks, fragments, and lava at varying distances from the source.

– Effusive eruptions where material flow rather than explosions is the major hazard. Flows vary in nature (mud, ash, lava) and quantity and may originate from multiple sources. Flows are governed by gravity, surrounding topography, and material viscosity.

Hazards associated with volcanic eruptions include lava flows, falling ash and projectiles, mudflows, and toxic gases. Volcanic activity may also trigger other natural hazardous events including local tsunamis, deformation of the landscape, floods when lakes are breached or when streams and rivers are dammed, and tremor-provoked landslides.

The term landslide includes slides, falls, and flows of unconsolidated materials. Landslides can be triggered by earthquakes, volcanic eruptions, soils saturated by heavy rain or groundwater rise, and river undercutting. Earthquake shaking of saturated soils creates particularly dangerous conditions. Although landslides are highly localized, they can be particularly hazardous due to their frequency of occurrence. Classes of landslide include:

– Rockfalls, which are characterized by free-falling rocks from overlying cliffs. These often collect at the cliff base in the form of talus slopes which may pose an additional risk.

– Slides and avalanches, a displacement of overburden due to shear failure along a structural feature. If the displacement occurs in surface material without total deformation it is called a slump.

– Flows and lateral spreads, which occur in recent unconsolidated material associated with a shallow water table. Although associated with gentle topography, these liquefaction phenomena can travel significant distances from their origin.

The impact of these events depends on the specific nature of the landslide. Rockfalls are obvious dangers to life and property but, in general, they pose only a localized threat due to their limited areal influence. In contrast, slides, avalanches, flows, and lateral spreads, often having great areal extent, can result in massive loss of lives and property. Mudflows, associated with volcanic eruptions, can travel at great speed from their point of origin and are one of the most destructive volcanic hazards.

Two types of flooding can be distinguished:

(1) land-borne floods, or river flooding, caused by excessive run-off brought on by heavy rains, and

Storm surges are an abnormal rise in seawater level associated with hurricanes and other storms at sea. Surges result from strong on-shore winds and/or intense low-pressure cells and ocean storms. The water level is controlled by wind, atmospheric pressure, existing astronomical tide, waves and swell local coastal topography and bathymetry, and the storm’s proximity to the coast.

Most often, destruction by storm surge is attributable to:

– Wave impact and the physical shock on objects associated with the passing of the wave front.
– Hydrostatic/dynamic forces and the effects of water lifting and carrying objects.

The most significant damage often results from the direct Impact of waves on fixed structures. Indirect impacts include flooding and undermining of major infrastructures such as highways and railroads.

Hooding of deltas and other low-lying coastal areas is exacerbated by the influence of tidal action, storm waves, and frequent channel shifts.

Land-borne floods occur when the capacity of stream channels to conduct wafer is exceeded and water overflows banks. Floods are natural phenomena and may be expected to occur at irregular intervals on all streams and rivers. Settlement of floodplain areas is a major cause of flood damage.

Tsunamis are long-period waves generated by disturbances such as earthquakes, volcanic activity, and undersea landslides. The crests of these waves can exceed heights of 25 meters on reaching shallow water. The unique characteristics of tsunamis (wavelengths commonly exceeding 100 km, deep-ocean velocities of up to 700 km/hour, and small crest heights in deep water) make their detection and monitoring difficult. Characteristics of coastal flooding caused by tsunamis are the same as those of storm surges.

Hurricanes are tropical depressions which develop into severe storms characterized by winds directed inward in a spiraling pattern toward the center. They are generated over warm ocean water at low latitudes and are particularly dangerous due to their destructive potential, large zone of influence, spontaneous generation, and erratic movement. Phenomena which are associated with hurricanes are:

– Winds exceeding 64 knots (74 mi/hr or 118 km/hr), the definition of hurricane force. Damage results from the wind’s direct impact on fixed structures and from wind-borne objects.

– Heavy rainfall which commonly precedes and follows hurricanes for up to several days. The quantity of rainfall is dependent on the amount of moisture in the air, the speed of the hurricane’s movement, and its size. On land, heavy rainfall can saturate soils and cause flooding because of excess runoff (land-borne flooding); it can cause landslides because of added weight and lubrication of surface material; and/or it can damage crops by weakening support for the roots.

– Storm surge (explained above), which, especially when combined with high tides, can easily flood low-lying areas that are not protected.

Hazards in Arid and Semi-Arid Areas

Desertification, or resource degradation in arid lands that creates desert conditions, results from interrelated and interdependent sets of actions, usually brought on by drought combined with human and animal population pressure. Droughts are prolonged dry periods in natural climatic cycles. The cycles of dry and wet periods pose serious problems for pastoralists and farmers who gamble on these cycles. During wet periods, the sizes of herds are increased and cultivation is extended into drier areas. Later, drought destroys human activities which have been extended beyond the limits of a region’s carrying capacity.

Overgrazing Is a frequent practice In dry lands and is the single activity that most contributes to desertification. Dry-land farming refers to rain-fed agriculture In semiarid regions where water is the principal factor limiting crop production. Grains and cereals are the most frequently grown crops. The nature of dry-land farming makes it a hazardous practice that can only succeed if special conservation measures such as stubble mulching, summer fallow, strip cropping, and clean tillage are followed. Desertified dry lands in Latin America can usually be attributed to some combination of exploitative land management and natural climate fluctuations.

Soil erosion and the resulting sedimentation constitute major natural hazards that produce social and economic losses of great consequence. Erosion occurs in all climatic conditions but is discussed as an arid zone hazard because together with salinization, it is a major proximate cause of desertification. Erosion by water or wind occurs on any sloping land regardless of its use. Land uses that increase the risk of soil erosion Include overgrazing, burning and/or exploitation of forests, certain agricultural practices, roads and trails, and urban development. Soil erosion has three major effects: loss of support and nutrients necessary for plant growth; downstream damage from sediments generated by erosion; and depletion of the water storage capacity, because of soil loss and sedimentation of streams and reservoirs, which results in reduced natural stream flow regulation.

Saline water is common in dry regions, and soils derived from chemically weathered marine deposits (such as shale) are often saline. Usually, however, saline soils have received salts transported by water from other locations. Salinization most often occurs on irrigated land as the result of poor water control, and the primary source of salts impacting soils is surface and/or groundwater. Salts accumulate because of flooding of low-lying lands, evaporation from depressions having no outlets, and the rise of groundwater close to soil surfaces. Salinization results in a decline in soil fertility or even a total loss of land for agricultural purposes. In certain instances, farmland abandoned because of salinity problems may be subjected to water and wind erosion and become desertified.

Inexpensive water usually results in over-watering. In dry regions, salt-bearing groundwater is frequently the major water resource. The failure to properly price water from irrigation projects can create a great demand for such projects and result in misuse of available water, causing waterlogging and salinization.

What are Natural Resources?