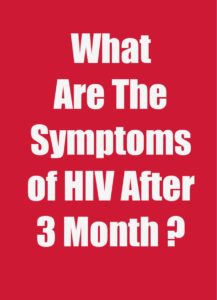 HIV stands for “Human Immuno Deficiency Virus”. It is the causative agent of AIDS.

What Does AIDS Stand For?

-During transfusion of an infected blood.

-By the use of contaminated and un-sterilized sharp instruments such as syringes.

-From infected mother to child during pregnancy, child birth or breast feeding.

How is HIV Not Transmitted?

-Handshake with an infected person

-Eating or playing with an infected person.

What are the symptoms of HIV after 3 months?

Many do not know when they become infected with HIV, it is also quite normal not to have any noticeable symptoms at all for several years. Early symptoms of HIV infection may be mild and easily dismissed. But even without noticeable symptoms, an infected person can still pass the virus to others. That’s one of many reasons why it’s important to know if you have the disease. As many as 90% of persons diagnosed with HIV will have experienced one or more of the following symptoms. SEE: States With Highest HIV Rate In Nigeria 2020/2021

HIV Symptoms within the first 4 Weeks

After the initial exposure to the HIV virus you can expect to see the following symptoms within the first four weeks :

These symptoms are as a result of the body’s immune system attempting to mount a defense against the viral infection. The symptoms, if they have occurred at all will normally resolve on their own. This is then followed by a long period in which the person feels physically healthy this is known as the window period. During the window period, a person can be infected with HIV and be very infectious but still test HIV negative.

A HIV antibody response can be detected as early as two weeks in a few people and in more than 99.9% of people by 3 months. An antibody test at 4 weeks will detect 95% of infections. Antibody testing at 4 weeks can provide a good indication of your HIV status, but you need a test at 12 weeks after the exposure to be considered HIV negative.

Can You Get HIV From Saliva?