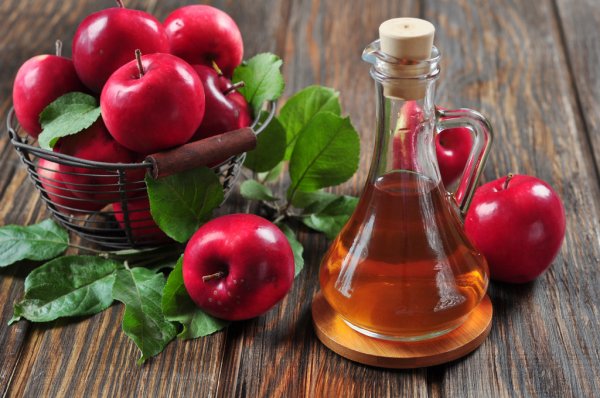 Apple cider vinegar, or cider vinegar, is a vinegar made from fermented apple juice, and used in salad dressings, marinades, vinaigrettes, food preservatives, and chutneys. It is made by crushing apples, then squeezing out the juice. The fruit juice from apples has been consumed fresh, distilled into apple brandy, or fermented as cider, which can be subsequently bioconverted to apple cider vinegar. Apple cider vinegar has been used commonly in food preparation and preservation, including in salad dressings, marinades, vinaigrettes, food preservatives, and chutneys. Vinegar has been sold commercially for more than 5,000 years. Use of the combination of apple cider vinegar and honey as an anti-infective remedy was documented in the Old Testament and by Hippocrates. It was also used as a disinfectant for wounds during the American Civil War. Bioconversion of apple cider into vinegar is achieved by both natural and industrial processes; a key factor in bioconversion is the microbes used to convert the ethanol into acetic acid.

Antioxidants preserve an ample function of immune cells against homeostatic disturbances caused by oxidative stress. Therefore, since the immune system is an indicator of health and a longevity analyst, the protection of this sys- tem afforded by dietary antioxidant. The Antioxidant activity of Apple cider vinegar has been demonstrated using various assay methods that indicate the free radical scavenging activity of apple cider vinegar is very high.  In rats, administration of apple cider vinegar for 6 and/or 9 weeks significantly improved the worsening of several liver and kidney antioxidant markers resulting from a high-fat diet , specifically, malondialdehye, thiol group levels, superoxide dismutase, and catalase. Improvements in glutathione peroxidase (GSH-Px) activity were significant in the liver but insignificant in the kidney. I

Nevertheless, people without diabetes can also benefit from keeping their blood sugar levels in the normal range, as some researchers believe that high blood sugar levels are a major cause of aging and various chronic diseases. The most effective and healthiest way to regulate blood sugar levels is to avoid refined carbs and sugar, but apple cider vinegar may also have a beneficial effect. Research suggests that vinegar offers the following benefits for blood sugar and insulin levels:

A small study suggests vinegar may improve insulin sensitivity by 19–34% during a high carb meal and significantly lower blood sugar and insulin response . In a small study in 5 healthy people, vinegar reduced blood sugar by 31.4% after eating 50 grams of white bread.

A small study in people with diabetes reported that consuming 2 tablespoons of apple cider vinegar before bedtime reduced fasting blood sugar by 4% the following morning . Numerous other studies in humans show that vinegar can improve insulin function and lower blood sugar levels after meals. However, If you’re currently taking blood-sugar-lowering medications, check with your healthcare provider before increasing your intake of any type of vinegar.

Maintaining a healthy weight is important for health. In addition to lowering the risk of heart disease, stroke, diabetes, and high blood pressure, it can also lower the risk of many different cancers. Your weight, your waist size, and the amount of weight gained since your mid-20s can have serious health implications.  Consuming vinegar before or with a meal may have a satiating effect. A 12-week study from Japan reported that people who had consumed up to 30 milliliters (roughly 6 teaspoons) of vinegar per day experienced a modest one-to-two pound reduction in body weight. Body mass index (BMI), waist circumference, triglycerides, and visceral fat were also slightly reduced. People tend to consume greater than normal amounts of apple cider vinegar when using it ACV for weight loss purposes, with some even taking it in tablet form.

To address dandruff, some people find that lightly spritzing an apple cider vinegar and water solution onto the scalp combats persistent flakes, itchiness, and irritation. Vinegar’s acetic acid may alter the scalp’s pH, making it harder for yeast—one of the main contributors to dandruff—to flourish. It has also been suggested that it can treat a form of eczema known as seborrheic dermatitis. A 2017 study published in the Galen Medical Journal suggested that the topical application of the flowering herb Althaea officinalis combined with vinegar was able to resolve seborrheic dermatitis is a 32-year-old woman. Although apple cider vinegar is sometimes recommended as a hair rinse to remove shampoo build-up and clarify dull hair, the solution has to be very dilute in order to prevent stinging the eyes.

Apple cider vinegar (ACV) for Sunburn and Other Skin Injuries

While the more common recommendation for a mild sunburn is a cool water compress, cool bath, aloe gel, or moisturizer, some people swear by apple cider vinegar. It can be added to a cool bath or mixed with cool water and lightly spritzed on affected areas (avoiding the face) to relieve pain and discomfort. There is little evidence that apple cider vinegar can help heal or relieve sunburn pain better than no treatment. It does, however, have excellent antibacterial properties that may help prevent skin infections caused by sunburn and other skin injuries.

Apple cider vinegar shouldn’t be applied full-strength or in strong concentrations to the skin, as the acidity can further injure the skin. It also shouldn’t be used for more serious burns. Be sure to consult your health care provider for help in determining the severity of your sunburn. If you have mosquito bites, poison ivy, or jellyfish stings, a weak apple cider vinegar solution dabbed onto bites and stings may help itching and irritation.

Apple cider vinegar may help to dry out pimples when a solution is dabbed onto pimples. It should be diluted before applying it to the face as it can cause skin injury or chemical burns if it’s not dilute enough. The concentration of acetic acid in apple cider vinegar varies widely and is not standardized, making it difficult to judge how much to dilute it to be safe as a skin toner or for other purposes. Although the evidence supporting the use of apple cider vinegar in treating acne is lacking, research has suggested that it may help diminish the appearance of varicose veins when applied topically.

Apple cider vinegar is a popular household ingredient, which may lead you to believe that it’s completely safe. While there may be no cause for alarm if you are generally healthy, there are some potential effects to be aware of, particularly if the concentration is too strong or is in contact with your body for too long. Apple cider vinegar, for instance, may cause chemical burns. There have been case reports of chemical burns after apple cider vinegar was used for warts and a skin condition known as molluscum contagiosum.

Although apple cider vinegar is widely touted as a home remedy to whiten teeth or freshen breath, exposing your teeth to the acidity may erode tooth enamel and lead to cavities. When taken internally, ACV may result in decreased potassium levels, hypoglycemia, throat irritation, and allergic reactions. It is an acid (a pH less than 7 is an acid, and many apple cider vinegar products have a pH of 2 to 3) and can cause burns and injury to the digestive tract (including the throat, esophagus, and stomach), especially when taken undiluted or in large amounts.

Multiple reports of chemical burns with apple cider vinegar have been documented. Cases of dermal chemical burns, particularly with the use of occlusive dressings, have also been reported. An 11-year-old girl used this occluded apple cider vinegar-cotton ball method on a melanocytic nevus after watching a tutorial video online. When the girl’s mother noticed the bandage 3 days later, she removed it and a few weeks later sought medical treatment for her daughter when the nevus repigmented.

Apple cider vinegar is available as a liquid and in supplement capsules. There is no standard dose for ACV supplements, so follow the package directions and check with your healthcare provider.

When using vinegar, most suggested uses involve diluting apple cider vinegar before applying it to the body. However, the safety of different vinegar-to-water ratios isn’t known. A 1:10 ratio has been suggested when applying it directly to skin, however, it should be weaker (or avoided entirely) on weak or delicate skin.

Although a teaspoon to a tablespoon mixed into 8 ounces of water is often suggested as a reasonable amount for internal use, the safety of various doses isn’t known.

You can try to use it highly diluted, but the amount of acetic acid in commercial apple cider vinegar varies (unlike white vinegar, which is 5% acetic acid) making it impossible to be sure of the true strength.

Where to Buy Apple Cider Vinegar In Nigeria

You can discover a large selection of genuine Apple Cider Vinegar on Jumia , Shoprite, Konga and Jiji at very prices in Nigeria.

How much does Apple Cider Vinegar cost in Nigeria

The price of Apple Cider Vinegar cost in Nigeria depends on the brand and volume . The cheapest apple cider vinegar  in Nigeria cost around two thousand five hundred naira (=N=2500) while the top of the range brands cost around fifteen thousand naira (=N=15,000)

“Packed in a glass bottle, organically grown and certified, “Mother” contained, unfiltered and unpasteurized, give a smooth and delicious taste to salads, veggies, juices, smoothies,…”

“No harsh taste, blend with healthy organic ginger and honey, pack of 4, non-GMO, gluten-free, rich in carbohydrates, minerals, and vitamins.”

Health Benefits and Side Effects of Waakye