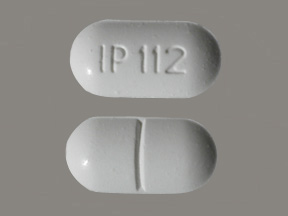 The white, capsule-shaped pill with the imprint IP 112 has been identified as Acetaminophen and Hydrocodone Bitartrate 500 mg / 7.5 mg. It is supplied by Amneal Pharmaceuticals. Acetaminophen-hydrocodone is a prescription medication. As an opioid, it’s a controlled substance. It comes as an oral tablet and an oral solution. Acetaminophen-hydrocodone is also available as the brand-name drugs Norco and Vicodin. It’s also available in its generic form. Generic drugs usually cost less than brand-name drugs. In some cases, they may not be available in every strength or form as the brand-name version.

IP 112 pill is used to treat moderate to severe pain that other treatments have not been able to relieve.

This medication is a combination of hydrocodone and acetaminophen. Hydrocodone is an opioid (narcotic), and acetaminophen is an analgesic (pain reliever). Both drugs are used to reduce pain. These drugs work in your brain to block pain signals. They decrease your ability to feel pain.

Acetaminophen-hydrocodone oral tablet may make you feel sleepy, dizzy, or lightheaded. Avoid driving a car or using machinery until you know how your body reacts to this medication. This drug can also cause other side effects.

Taking certain drugs with IP 112 pill increases your risk of drowsiness, dizziness, tiredness, and reduced physical and mental function. If you need to use one of these drugs with acetaminophen-hydrocodone, the dosage of one or both drugs should be reduced.

Taking this medication with drugs that increase the amount of a chemical called serotonin in your body can cause a serious problem. This problem, called serotonin syndrome, can be fatal. Tell your doctor if you are taking any of these medications:

Drugs that inhibit the activity of certain enzymes in the liver

Taking this medication with drugs that can inhibit the activity of certain liver enzymes can increase the amount of hydrocodone in your body and cause more side effects. You may have increased breathing problems or drowsiness. Examples of these drugs include:

Drugs that increase the activity of certain enzymes in the liver

Taking this medication with drugs that can increase the activity of certain liver enzymes can lower the amount of hydrocodone or acetaminophen in your body. You may need a higher dose of this medication to control your pain. Examples of these drugs include:

This drug can cause a severe allergic reaction. Symptoms may include:

Combining alcohol with this drug also increases your risk for liver problems and liver damage.

For people with head injury: If you have a head injury, hydrocodone may cause increased pressure in your brain and cause breathing problems.

For people with stomach problems: Use caution taking this drug if you have intestinal obstruction, ulcerative colitis, or constipation. This medication may worsen your symptoms.

For people with severe kidney disease: This drug may build up in your body, which can cause trouble breathing and other side effects.

For people with lung disease: If you have lung disease, you might have trouble breathing if you take this medication.

For people with prostate enlargement: If you have an enlarged prostate, taking IP 112 pill may cause increased difficulty in urination.

For people with asthma: If you have severe or uncontrolled asthma, do not use this medication without talking to your doctor. You may have to take the first few doses in a monitored setting.

For pregnant women: This drug is a category C pregnancy drug. That means two things:

Research in animals has shown adverse effects to the fetus when the mother takes the drug.

There haven’t been enough studies done in humans to be certain how the drug might affect the fetus.

Tell your doctor if you’re pregnant or plan to become pregnant. Babies born to mothers who regularly take opioids such as hydrocodone may be born physically dependent on this drug. This can cause symptoms of withdrawal or neonatal opioid withdrawal syndrome. Symptoms can include:

There’s also an increased chance that the baby may have trouble breathing if this medication is given to the mother shortly before giving birth.

For women who are breastfeeding: Acetaminophen is passed in small amounts in breast milk. Hydrocodone also passes into breast milk and may result in excessive tiredness and slowed breathing in a child who is breastfed.

For seniors: Older adults may have decreased kidney, liver, and heart function. If you’re a senior, your doctor may start you at a low dose of this medication. SEE: How To Spot Vicodin Yellow Pill V 3601 Fake [Norco]

M367 Pill: Everything You Should Know