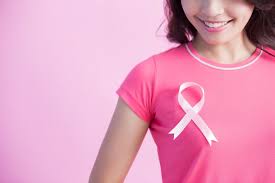 Over the years, there has been some debate over just how valuable breast self-examination is in detecting breast cancer early and increasing the likelihood of survival. For example, a 2008 study of nearly 400,000 women in Russia and China reported that breast self-examination does not have a meaningful impact on breast cancer survival rates and may even cause harm by prompting unnecessary biopsies (removal and examination of suspicious tissue).

What is inflammatory breast cancer?

Inflammatory breast cancer (IBC) is rare and accounts for only 1-5% of all breast cancers. Although it is often a type of invasive ductal carcinoma, it differs from other types of breast cancer in its symptoms, outlook, and treatment. IBC has symptoms of inflammation like swelling and redness, but infection or injury do not cause IBC or the symptoms. IBC symptoms are caused by cancer cells blocking lymph vessels in the skin causing the breast to look “inflamed.”

Symptoms include breast swelling, purple or red color of the skin, and dimpling or thickening of the skin of the breast so that it may look and feel like an orange peel. Often, you might not feel a lump, even if it is there. If you have any of these symptoms, it does not mean that you have IBC, but you should see a doctor right away.

In about 1 of every 3 cases, IBC has already spread (metastasized) to distant parts of the body when it is diagnosed. This makes it harder to treat successfully. Women with IBC tend to have a worse prognosis (outcome) than women with other common types of breast cancer.

Inflammatory breast cancer (IBC) causes a number of signs and symptoms, most of which develop quickly (within 3-6 months), including: 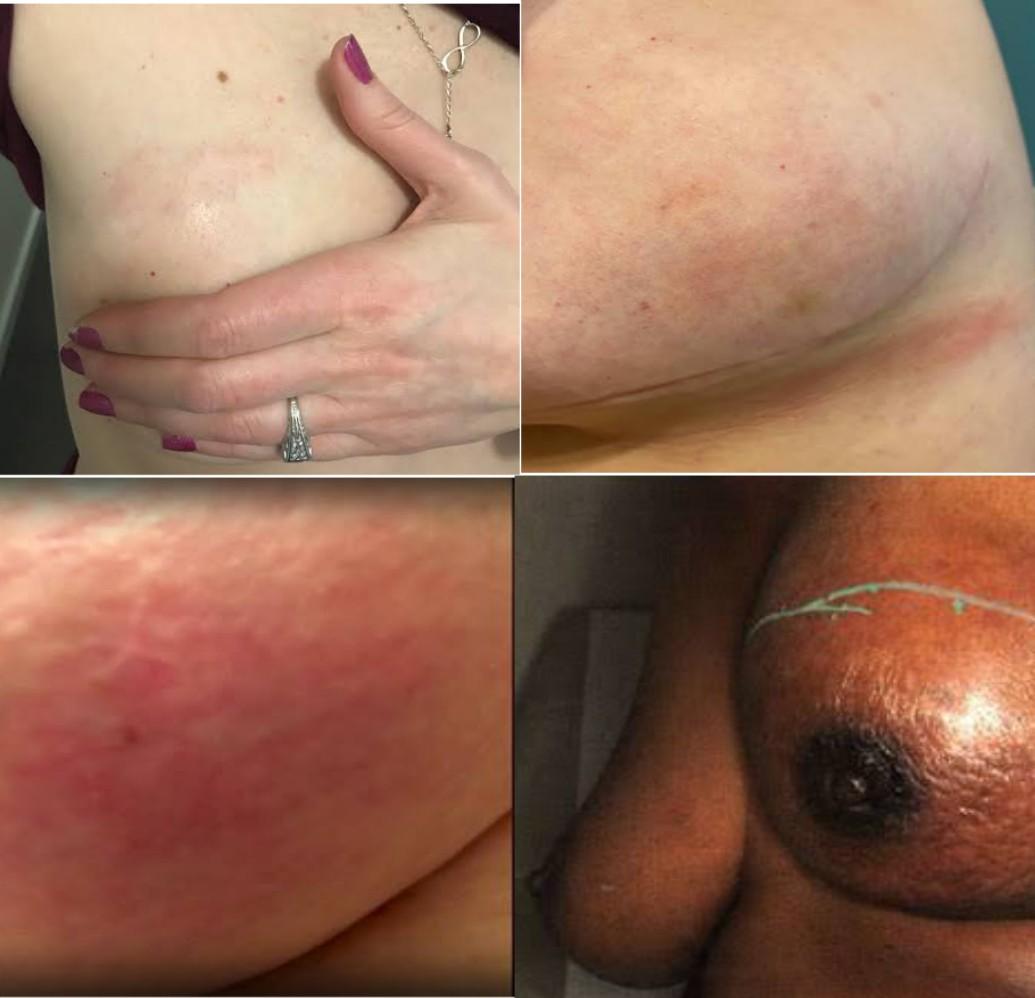 Tenderness, redness, warmth, and itching are also common symptoms of a breast infection or inflammation, such as mastitis if you’re pregnant or breastfeeding. Because these problems are much more common than IBC, your doctor might suspect infection at first as a cause and treat you with antibiotics. This may be a good first step, but if your symptoms don’t get better in 7 to 10 days, more tests need to be done to look for cancer. The possibility of IBC should be considered more strongly if you have these symptoms and are not pregnant or breastfeeding, or have been through menopause. 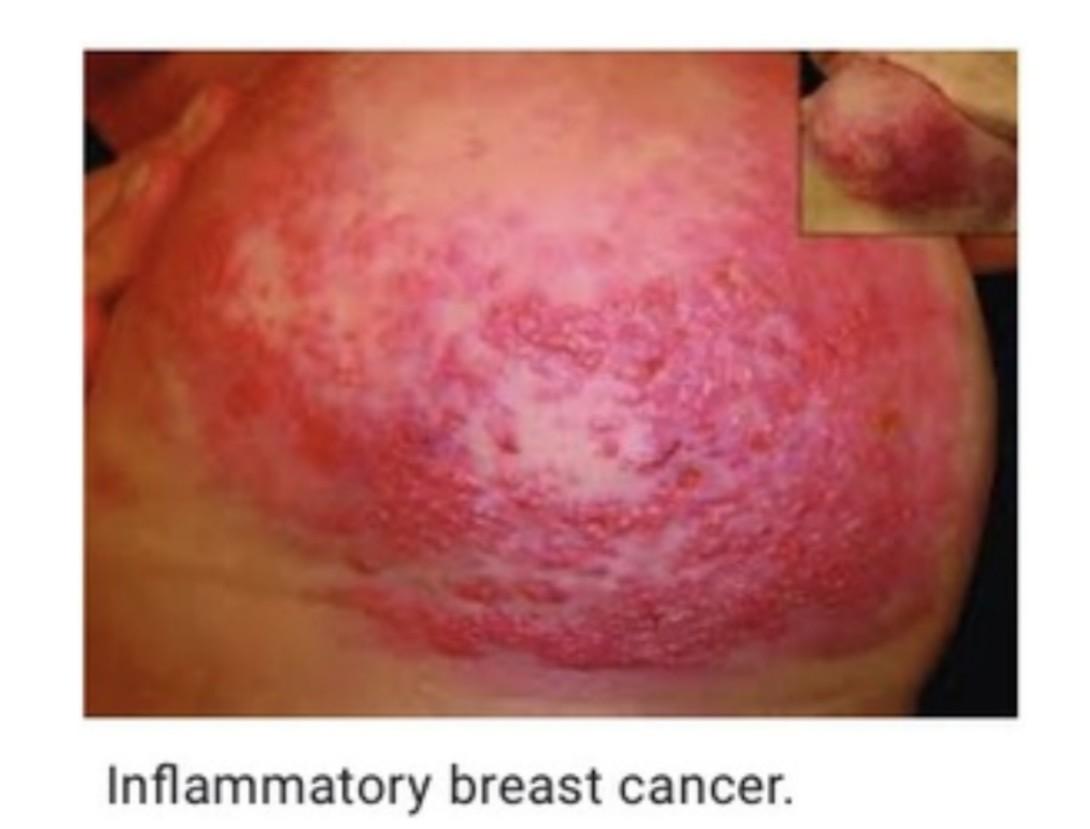 IBC grows and spreads quickly, so the cancer may have already spread to nearby lymph nodes by the time symptoms are noticed. This spread can cause swollen lymph nodes under your arm or above your collar bone. If the diagnosis is delayed, the cancer can spread to distant sites. Generally, an inflammatory breast cancer rash looks like an insect bite. Your nipple turns inward or gets flat. Swelling and redness affect at least 1/3 of your breast. Pink, purple-red, or bruised skin.

If you have any of these symptoms, it does not mean that you have IBC, but you should see a doctor right away. If treatment with antibiotics is started, you’ll need to let your doctor know if it doesn’t help, especially if the symptoms get worse or the affected area gets larger. Ask to see a specialist (like a breast surgeon) or you might want to get a second opinion if you’re concerned.

Make it a routine. The more you examine your breasts, the more you will learn about them, and the easier it will become for you to tell if something has changed. Try to get in the habit of doing a breast self-examination once a month to familiarize yourself with how your breasts normally look and feel. Examine yourself several days after your period ends, when your breasts are least likely to be swollen and tender. If you are no longer having periods, choose a day that’s easy to remember, such as the first or last day of the month.

Get to know your breasts’ different “neighborhoods.” The upper, outer area — near your armpit — tends to have the most prominent lumps and bumps. The lower half of your breast can feel like a sandy or pebbly beach. The area under the nipple can feel like a collection of large grains. Another part might feel like a lumpy bowl of oatmeal.

Start a journal where you record the findings of your breast self-exams. This can be like a small map of your breasts, with notes about where you feel lumps or irregularities. Especially in the beginning, this may help you remember, from month to month, what is “normal” for your breasts. It is not unusual for lumps to appear at certain times of the month, but then disappear, as your body changes with the menstrual cycle (if you are still menstruating). SEE: What Does A Rash From Breast Cancer Look Like

Can Slapping Breast Cause Cancer?

Can The Pill Cause Breast Cancer?