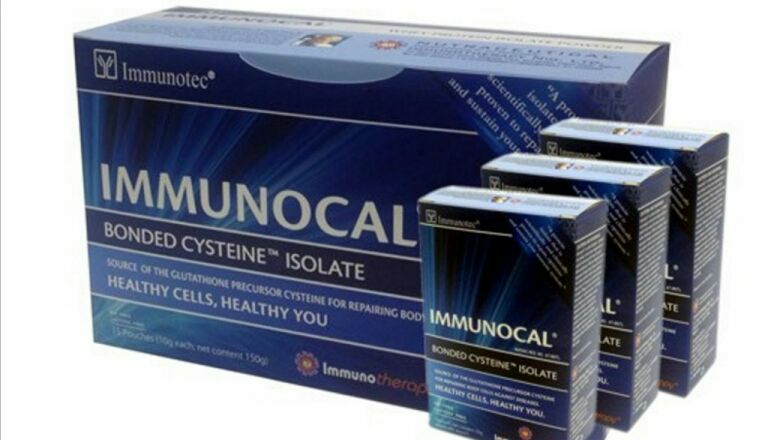 Immunocal supplement is a natural food protein concentrate that assists the body in maintaining optimal concentrations of glutathione (GSH) by supplying the precursors required for intracellular glutathione synthesis. It is clinically proven to raise glutathione values.

Immunocal supplement holds several patents in the USA and worldwide and is listed by the FDA in the category of GRAS (generally recognized as safe). It assists the body in maintaining optimal concentrations of glutathione (GSH) by supplying the precursors required for intracellular glutathione synthesis. It is clinically proven to raise glutathione values.

Glutathione is a tripeptide made intracellularly from its constituent amino acids L-glutamate, L-cysteine, and glycine. The sulfhydryl (thiol) group (SH) of cysteine is responsible for the biological activity of glutathione. Provision of this amino acid is the rate-limiting factor in glutathione synthesis by the cells since bioavailable cysteine is relatively rare in foodstuffs.

Immunocal is a bovine whey protein isolate specially prepared so as to provide a rich source of bioavailable cysteine. Immunocal® can thus be viewed as a cysteine delivery system.

The disulphide bond in cystine is pepsin and trypsin resistant but may be split by heat, low pH or mechanical stress releasing free cysteine. When subject to heat or shearing forces (inherent in most extraction processes), the fragile disulfide bonds within the peptides are broken and the bioavailability of cysteine is greatly diminished.

Glutathione is a tightly regulated intracellular constituent and is limited in its production by negative feedback inhibition of its own synthesis through the enzyme gamma-glutamylcysteine synthetase, thus greatly minimizing any possibility of overdosage.

It is the major endogenous antioxidant produced by the cells, participating directly in the neutralization of free radicals and reactive oxygen compounds, as well as maintaining exogenous antioxidants such as vitamins C and E in their reduced (active) forms.

Through direct conjugation, it detoxifies many xenobiotics (foreign compounds) and carcinogens, both organic and inorganic.

It is essential for the immune system to exert its full potential, e.g.

(3) enhancing the killing activity of cytotoxic T cells and NK cells, and

It plays a fundamental role in numerous metabolic and biochemical reactions such as DNA synthesis and repair, protein synthesis, prostaglandin synthesis, amino acid transport, and enzyme activation. Thus, every system in the body can be affected by the state of the glutathione system, especially the immune system, the nervous system, the gastrointestinal system, and the lungs.

Is immunocal good for cancer?

Immunocal has a method-of-use patent for preventing and treating cancer. It can reduce side effects from some cancers. Immunocal is the only natural product patented to safely raise and sustain GSH.

Each sachet of Immunocal contains nine grams of protein. Patients on a protein-restricted diet need to take this into account when calculating their daily protein load. Although a bovine milk derivative, Immunocal contains less than 1% lactose and therefore is generally well tolerated by lactose-intolerant individuals.

However, patients undergoing immunosuppressive therapy should discuss the use of this product with their health professional. In addition, gastrointestinal bloating and cramps can occur while using Immunocal if you are not sufficiently rehydrated. Transient urticarial-like rash in rare individuals undergoing severe detoxification reaction can also occur but rash abates when product intake is stopped or reduced. Also see: Immunage

What are the Pros and Cons of Heal-n-Soothe?

What Are The Pros And Cons Of The COVID-19 Vaccine?