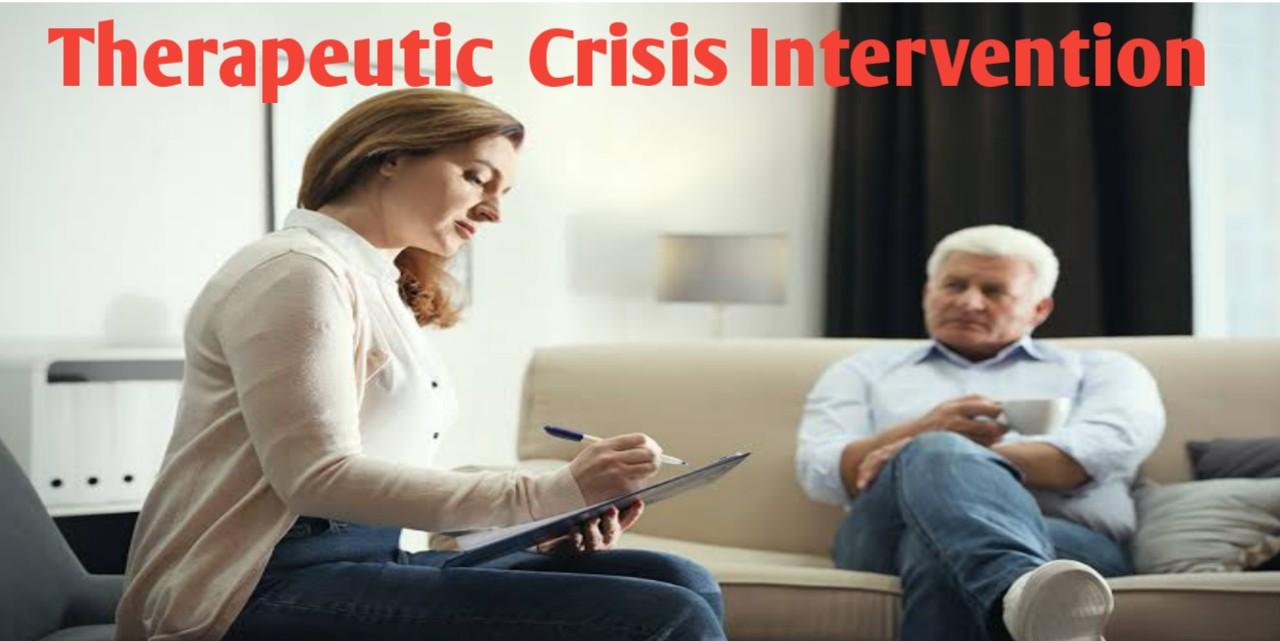 By: Brenda A. Stevens, Ph.D.: An Assistant Professor in the Department of Educational Psychology at Miami University, Oxford, Ohio.

Crisis intervention is emergency first aid for mental health (Ehly, 1986). This digest provides a brief, conceptual overview of crisis intervention, and summarizes the steps a worker may use to identify, assess, and intervene with an individual experiencing crisis. The Chinese language contains two characters that, taken together, connote the concept of crisis. The first character, Wei, indicates a critical or dangerous situation, while the second one, ji, means an opportunity for change. Thus, these characters together indicate that a crisis is a point in time that allows the opportunity to change.

Crisis intervention requires that the person experiencing crisis receive timely and skillful support to help cope with his/her situation before future physical or emotional deterioration occurs. A crisis may occur when an individual is unable to deal effectively with stressful changes in the environment. A stressful event alone does not constitute a crisis; rather, a crisis is determined by the individual’s view of the event and response to it. If the individual sees the event as significant and threatening, has exhausted all his/her usual coping strategies without effect, and is unaware or unable to pursue other alternatives, then the precipitating event may push the individual toward psychological disequilibrium, a state of crisis (Caplan, 1964; Smead, 1988).

Psychological disequilibrium may be characterized by feelings of anxiety, helplessness, fear, inadequacy, confusion, agitation, and disorganization (Smead, 1988). At this point, the individual experiencing this disequilibrium may be most receptive to outside assistance, thus providing an opportunity for behavioral change and a return to balance. To summarize, a crisis results from a person’s negative perception of a situation. Psychologists, counselors, social workers, mental health personnel, and therapists are trained to provide services to individuals in crisis. These workers can assist an individual or group in crisis by providing direct intervention, identifying alternative coping skills, or consulting with others.

A helper’s primary goals in a crisis are to identify, assess, and intervene; to return the individual to his/her prior level of functioning as quickly as possible; and to lessen any negative impact on future mental health. Sometimes during this process, new skills and coping mechanisms are acquired, resulting in change. Identification.

Identification recognizes that a problem exists and it focuses on

The event or crisis may be categorized as either developmental or situational (Smead, 1988). Developmental crises result from predictable change and are due to normal growth or development, such as the onset of adolescence. Situational crises are either predictable, arising from certain events, such as divorce or failing a grade, or are unpredictable, such as accidental death or natural disaster. Both types involve a change in circumstances, usually accompanied by a loss, which can precipitate a crisis reaction in an individual.

Therapists must promptly identify a person in crisis, as well as assess the degree to which his/her functioning is impaired. In addition to psychological disequilibrium, other signs and symptoms may indicate a problem for those experiencing a crisis. Physical symptoms such as changes in overall health, energy, or activity level, as well as in eating or sleeping patterns, may point to a problem. Emotional signs that may indicate a person in crisis include increased tension or fatigue, and changes in temperament, such as angry outbursts or depression. Behavioral signs such as the inability to concentrate, being preoccupied with certain ideas, or social withdrawal may also indicate a person in crisis (Ehly, 1986; Greenstone & Leviton, 1993).

After identifying a crisis situation and a person in crisis, workers assess the crisis’s impact on the individual. This assessment usually takes the form of an interview, during which the worker strives to convey an atmosphere of acceptance, support, and calm confidence about the future. Communication with the person experiencing a crisis is vital; this involves establishing eye, and sometimes, physical contact.

Questions addressed to the individual may include his/her perception of the problem, the frequency and sequence of events, his/her feelings, and a history of attempts to deal with the problem. Forced choice or open-ended questions may be used to assess the individual’s ability to communicate, as he/she may experience difficulty in expressing him/herself, making decisions, or in solving problems. Assessment may include what the individual is saying as well as his/her nonverbal communication, i.e. facial expression, posture, body and eye movements, and mannerisms. An essential part of this assessment is an evaluation of the person’s current safety as well as any risk to his/her own or someone else’s life.

Additionally, factors such as alcohol and drug use, current stress levels, and emotional effects, such as hopelessness and helplessness, should be identified.

After identification and assessment of the crisis and the person involved, the intervention occurs. While specialists (Hoff, 1989; Greenstone & Leviton, 1993; Sandoval, 1988; Sandoval, 1991; Zins & Ponti, 1990) in this area may differ on the name and number of steps involved, they agree that certain points are integral to intervention and are basic to a best- practice, problem-solving approach.

First, while supporting and empathizing with the individual in crisis, the worker should listen and avoid using ERIC Digest ERIC Digests are in the public domain and may be freely reproduced and disseminated. This publication was funded by the U.S. Department of Education, Office of Educational Research and Improvement, Contract No. RR93002004. Opinions expressed in this report do not necessarily reflect the positions of the U.S. Department of Education, OERI, or ERIC/CASS. For information on other ERIC/CASS products and services, please call toll-free (800) 414-9769 or (910) 334-4114 or fax (910) 334-4116 or write ERIC/CASS, School of Education, the University of North Carolina at Greensboro, Greensboro, NC 27412. the phrase “I understand” so as to allow the individual full and open expression of feelings and emotions. Second, the individual in crisis should answer the worker’s questions so as to define and clarify the incident and acknowledge any social and cultural factors which may relate to the crisis.

This second step places the problem in a framework. As Burak (1987, p. 1) states, “Understanding of and respect for the differences inherent in each culture are needed for rapid, effective, and sensitive treatment of emergency situations” (p. 1).

Third, the worker develops an awareness of the significance of the crisis from the individual’s point of view. These first three steps may have been partly completed during the identification and assessment stages of the crisis; it is important that they be finished before going on to the fourth step.

Fourth, mutual brainstorming of alternatives and discussion of available resources are jointly carried out by the individual in crisis and the worker. At this point, the worker may need to be more directive, by focusing on the current situation, proposing ideas and strategies for action, as well as suggesting other resources for support, instead of just listening and reflecting. (Sandoval, 1988). Fifth, the individual in crisis and the worker choose one or more specific, time limited goals which take into account the person’s significant others, social network, culture, and lifestyle.

Complete planning, including recognition of all the steps involved, as well as consideration of any barriers to success, should be completed before the solution is attempted. Some brief education, modeling, role playing, or rehearsal of potential situations may be done in this step to empower the individual further. Sixth, the worker and individual implement their plan and, if possible, evaluate its effectiveness. They then adjust the plan as necessary. Seventh, the worker provides for follow-up or refers the individual in crisis to a resource that can provide ongoing support. The worker then terminates the established crisis relationship.

In summary, crisis intervention provides the opportunity and mechanisms for change to those who are experiencing psychological disequilibrium, who are feeling overwhelmed by their current situation, who have exhausted their skills for coping, and who are experiencing personal discomfort. Crisis intervention is a process by which a mental-health worker identifies, assesses, and intervenes with the individual in crisis so as to restore balance and reduce the effects of the crisis in his/her life. The individual is then connected with a resource network to reinforce the change. Thus, as the Chinese characters suggest, crisis truly holds the opportunity for change.

Brenda A. Stevens, Ph.D., is an Assistant Professor in the Department of Educational Psychology at Miami University, Oxford, Ohio.