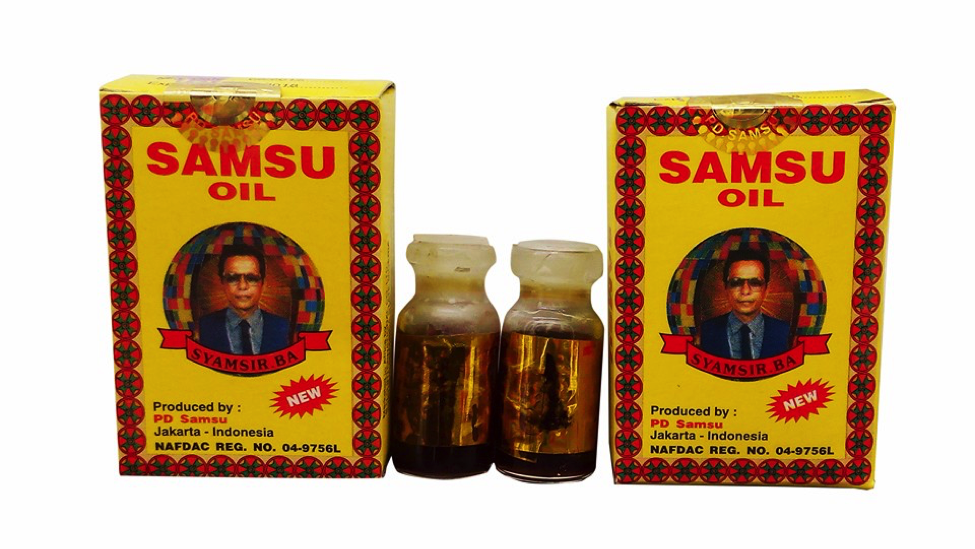 Samsu Oil is a herbal remedy manufactured in “Jakarta-Indonesia for men suffering from  premature ejaculation (PE). Premature ejaculation, usually defined as ejaculation within one minute of starting intercourse, is initially treated with behavioral techniques to delay climax. This includes the squeeze technique, which involves applying pressure just behind the head of the penis when ejaculation approaches and maintaining pressure until the sensation passes.

However, in many men, this doesn’t prevent ejaculation. PE is considered a type of sexual dysfunction. Sexual dysfunction refers to any of several types of problems that keep a couple from fully enjoying sexual activity. PE isn’t the same as erectile dysfunction (ED).  The ingredients used in making Samsu Oil include; Mycroetices Semen and Zingiberis Rfizoma Extract, Samsu Oil works by inhibiting prostaglandin and leukotriene synthesis.

Although Samsu oil is registered with NAFDAC, but like every other medication it also has side effects that comes with its ingredients. In addition, Fake Samsu oil are littered everywhere further complicating matters for men suffering from premature ejaculation.

Mycroetices Semen, one of the ingredients in Samsu oil can cause drowsiness, dizziness, hypotension or a headache. One should not drive a vehicle if using products like Samsu oil containing this plant because it makes you drowsy, dizzy and  lowers your blood-pressure extensively. Pharmacists also advise people not to drink alcohol as it  intensifies the drowsiness side-effects.

Zingiberis Rfizoma (ginger) extract, the other ingredient is used extensively in Ayurveda, the traditional medicine of India to block excessive clotting (that is, heart disease), reduce cholesterol and fight arthritis. In Arabian medicine, ginger is considered an aphrodisiac. According to the Food and Drug Administration (FDA), ginger oil is “generally recognized as safe” and few adverse effects have been reported. However, it might cause irritation on the skin for some people.

No medical studies exist on the safety of using Samsu oil and its side effects. While there are some good studies on the ingredients of this blended oil, more research is needed. It’s worth noting that certain ingredients in Samsu oil may cause skin allergies or a reaction in some people. In addition, Samsu oil is formulated for Men (not for men below the age of 18). As a note of warning, this product is not a substitute for any medical prescription. On the contrary, it is a kind of supplement for it. Samsu oil can’t be used to increase the size of your organ. Besides, there is no proven drug that will drastically increase the width and length of your penis.

What are the most effective treatments for premature ejaculation?

According to Harvard Health, there are a number of medications used for premature ejaculation, although none are specifically FDA-approved for this purpose. The most effective appear to be the antidepressant medications known as selective serotonin reuptake inhibitors (SSRIs), such as citalopram (Celexa) and fluoxetine (Prozac, Sarafem). You would need to take the medication every day, and it may take several weeks to show an effect. If these medications don’t work or cause unacceptable side effects, a different type of antidepressant, called clomipramine (Anafranil, Clofranil), may help. Another option is to apply a topical anesthetic (numbing cream) to the head of the penis to decrease sensation. SEE: MK Penis Enlargement Oil Side Effects