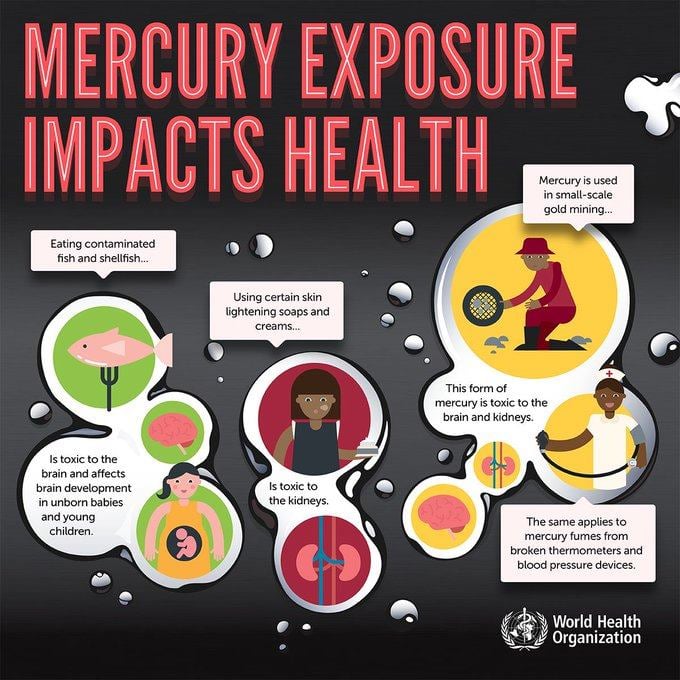 Skin-lightening or bleaching has reached epidemic levels in many nations across the world especially in African countries like Ghana, Nigeria, Mali, Kenya and Tanzania. Certain skin-lightening creams and medicated soaps can contain mercury. Cosmetic preparations containing mercury for bleaching purpose is an old practice. Mercury is a toxic metal but found usefulness in many cosmetic preparations targeted at skin lightening by suppression of melanin production by the skin.

Mercury is a volatile element and is harmful to the skin when used in an effort to lighten the skin. However, chronic exposure of the body to mercury at very low concentration can cause long-lasting neurological and kidney impairment. Mercury in bleaching preparations can be absorbed through the skin and accumulates in body organs giving rise to severe toxicity .

According to the World Health Organization, Women who use mercury-containing skin lighteners often have elevated mercury levels in their hair, blood and urine. Several studies have found hair mercury levels greater than 100 ppm in women using these products, compared with a ―normal‖ range of below 10 ppm. Similarly, far above normal levels of mercury have been measured in urine of women in Kenya and Tanzania who used mercury-containing skin lighteners, and users of these cosmetics in Hong Kong had elevated mercury levels in their blood and urine.

Long-term use of mercury-based skin lighteners often produces a characteristic ―slate gray skin color. Over-pigmented skin is a common problem among African women, caused by mercury and/or hydroquinone in skin-lightening creams, among other factors. Ammoniated mercury, used in some skin-lightening creams, can cause rashes and allergic reactions. Other ingredients in these products, in particular steroids, also damage the skin, sometimes severely.

Kidney damage caused by long-term use of mercury-containing skin-lightening creams has been reported by investigators in China, Hong Kong and the UK. In those cases, once the source of mercury exposure was identified and the women stopped using the harmful products, their kidney function gradually returned to normal. Unfortunately, most women who use skin-lightening products are unlikely to be seen by a medical professional who could detect such kidney damage at an early stage and eliminate their mercury exposure before more serious disease develops.

Mercury is also toxic to the nervous system. Users of mercury-containing soaps in Kenya had symptoms of nervous system toxicity including tremors, lassitude, vertigo, loss of memory, and generalized aches and pains, all classic signs of inorganic mercury poisoning. Two German women who used skin lighteners for up to 20 years each suffered from headaches, abdominal cramps and shortness of breath; both were repeatedly hospitalized.

However, the fact that even a majority of users may suffer no evident adverse effects does not make this category of products less dangerous to consumers. The developing brain is particularly sensitive to toxic effects, and the chief public health concern about mercury exposure from fish consumption, for example, is the risk of prenatal damage to the developing fetus. Mercury is also transferred from a mother to her nursing infant in breast milk. Unfortunately, no research appears to have been done to assess the possible effects of long-term use of skin lightening products by women of childbearing age on their children’s health. 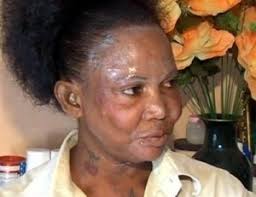 Soaps and creams containing mercury are banned in many countries including the United States, but may be available for purchase over the counter or on the Internet. The mercury in these types of products can be absorbed through your skin. Mercury can damage the brain, nervous system and kidneys. It may also damage the skin, cause rashes and blotchy spots, and give skin a grayish color. The longer and more often products containing mercury are used, the greater the health risk. These products can be especially harmful to children.

How to Identify Dangerous Soaps and Creams

Products may contain mercury, even if it is not listed as an ingredient on the label. According to a study which analyzed sixteen brands of soap, mercury was found to be present in some soaps which did not indicate it on their labels, as required by law. Check packaging materials and any instructions or ingredient lists carefully. Look for:

According to a study which analyzed sixteen brands of soap mercury was found to be present in some soaps which did not indicate it on their labels, as required by law. Here is a List of and examples of mercury-containing soap and creams in Nigeria and Other parts of the World;

SEE: How to Spot Fake Crusader Soap and Side Effects

How to Spot Fake Crusader Soap and Side Effects

Does Fair and White Gold 2 Bleach?