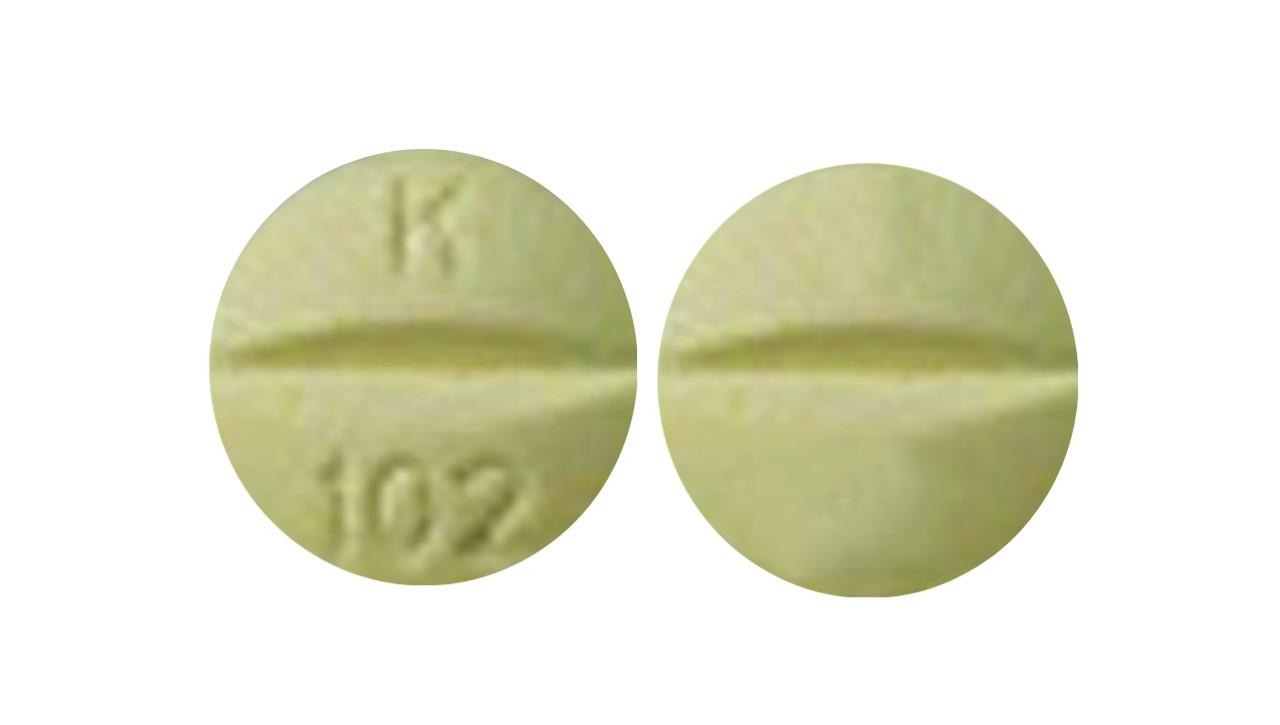 Attention deficit hyperactivity disorder (ADHD) is one of the most common neurodevelopmental disorders of childhood. It is usually first diagnosed in childhood and often lasts into adulthood. Children with ADHD may have trouble paying attention, controlling impulsive behaviors (may act without thinking about what the result will be), or be overly active.

The yellow, round pill with the imprint K 102 has been identified as Methylphenidate Hydrochloride 20 mg supplied by KVK-Tech, Inc.. Methylphenidate is in a class of medications called central nervous system (CNS) stimulants. It works by changing the amounts of certain natural substances in the brain.

Methylphenidate is used as part of a treatment program to control symptoms of attention deficit hyperactivity disorder (ADHD; more difficulty focusing, controlling actions, and remaining still or quiet than other people who are the same age) in adults and children. Methylphenidate (Methylin) is also used to treat narcolepsy (a sleep disorder that causes excessive daytime sleepiness and sudden attacks of sleep).

Read the Medication Guide provided by your pharmacist before you start taking yellow K 102 pill and each time you get a refill. If you have any questions, ask your doctor or pharmacist.

Take this medication regularly to get the most benefit from it. To help you remember, take it at the same times each day.

The dosage is based on your medical condition and response to treatment. Your doctor may direct you to gradually increase or decrease your dose. Also, if you have used it for a long time, do not suddenly stop using this drug without consulting your doctor.

If you suddenly stop using this medication, you may have withdrawal symptoms (such as depression, suicidal thoughts, or other mental/mood changes). To help prevent withdrawal, your doctor may lower your dose slowly. Withdrawal is more likely if you have used methylphenidate for a long time or in high doses. Tell your doctor or pharmacist right away if you have withdrawal.

Though it helps many people, this medication may sometimes cause addiction. This risk may be higher if you have a substance use disorder (such as overuse of or addiction to drugs/alcohol). Take this medication exactly as prescribed to lower the risk of addiction. Ask your doctor or pharmacist for more details. Tell your doctor if your condition does not improve or if it worsens.

Some people misuse K 102 pill to get high. People who misuse it might crush it into a powder. They snort it, or dissolve and inject it. College or university students might misuse K 102 pill because they think it will help them focus better on their studies by making it easier to pay attention and stay alert.

What does K 102 pill do to the body when abused?

Some people who misuse K 102 pill might feel high or excited, even when only low doses are taken. Others feel more excited when a high dose is taken. When misused, the drug can make people feel more alert or sleepier. Often they’re more awake right after they take it, but then they get very tired.

What are the side effects of K 102 pill?

The more common side effects that can occur with methylphenidate include:

o          symptoms of mania, such as racing thoughts, feelings of power, and excessive energy

Methylphenidate may interact with other medications

Methylphenidate oral tablet can interact with other medications, vitamins, or herbs you may be taking. An interaction is when a substance changes the way a drug works. This can be harmful or prevent the drug from working well.

Examples of drugs that can cause interactions with methylphenidate are listed below.

Methylphenidate cannot be used during treatment with MAOIs. You can’t take it within 14 days of stopping treatment with an MAOI. Using these medications together can lead to a dangerous increase in your blood pressure.

Taking these drugs with methylphenidate may reduce the intended effects of these medications. This means that they will be less effective. Examples of these drugs include:

Using warfarin, a blood thinner, with methylphenidate may increase the effect of warfarin in your body. This can raise your risk of bleeding.

This drug comes with several warnings.

Methylphenidate can cause a severe allergic reaction. Symptoms can include:

If you develop these symptoms, call 911 or go to the nearest emergency room.

Alcohol may increase the effects of methylphenidate. You should not use alcohol while taking this drug.

Alcohol may cause this drug to be released in your body more quickly. This can cause more side effects and lower the effect of the medication.

For people with heart problems: Methylphenidate may increase the risk of sudden death, stroke, and heart attack. If you have a heart condition, a history of heart attack, high blood pressure, or an abnormal heart rate, ask your doctor if this drug is safe for you.

For people with psychiatric disorders: Methylphenidate may make the symptoms of your condition worse. It can also cause new psychotic symptoms, especially in children and adolescents. You may need to stop taking this drug if this happens.

For people with seizures: If you or your child has a history of seizures, don’t take methylphenidate. It may increase your risk of having a seizure.

For people with glaucoma: Methylphenidate may worsen your vision.

For people with growth issues: Methylphenidate has been shown to slow growth in children. Your child’s doctor will monitor your child’s height and weight while they take this drug. If your child is not gaining height or weight, methylphenidate may need to be stopped.

For people with digestive tract problems: Don’t use the brand-name drug Concerta if you have a blockage in your esophagus, stomach, or small or large intestine. Concerta can make this problem worse.

Warnings for other groups

Tell your doctor if you’re pregnant or plan to become pregnant. Methylphenidate should be used during pregnancy only if the potential benefit justifies the potential risk.

If you become pregnant while taking this drug, call your doctor right away.

For seniors: This drug hasn’t been established as safe and effective for use in people over 65 years of age.

For children: This drug hasn’t been established as safe and effective for use in children under 6 years old.

Children should have their growth monitored by their doctor while they’re taking methylphenidate.