How to Spot Fake Zoltrate (Zolpidem) 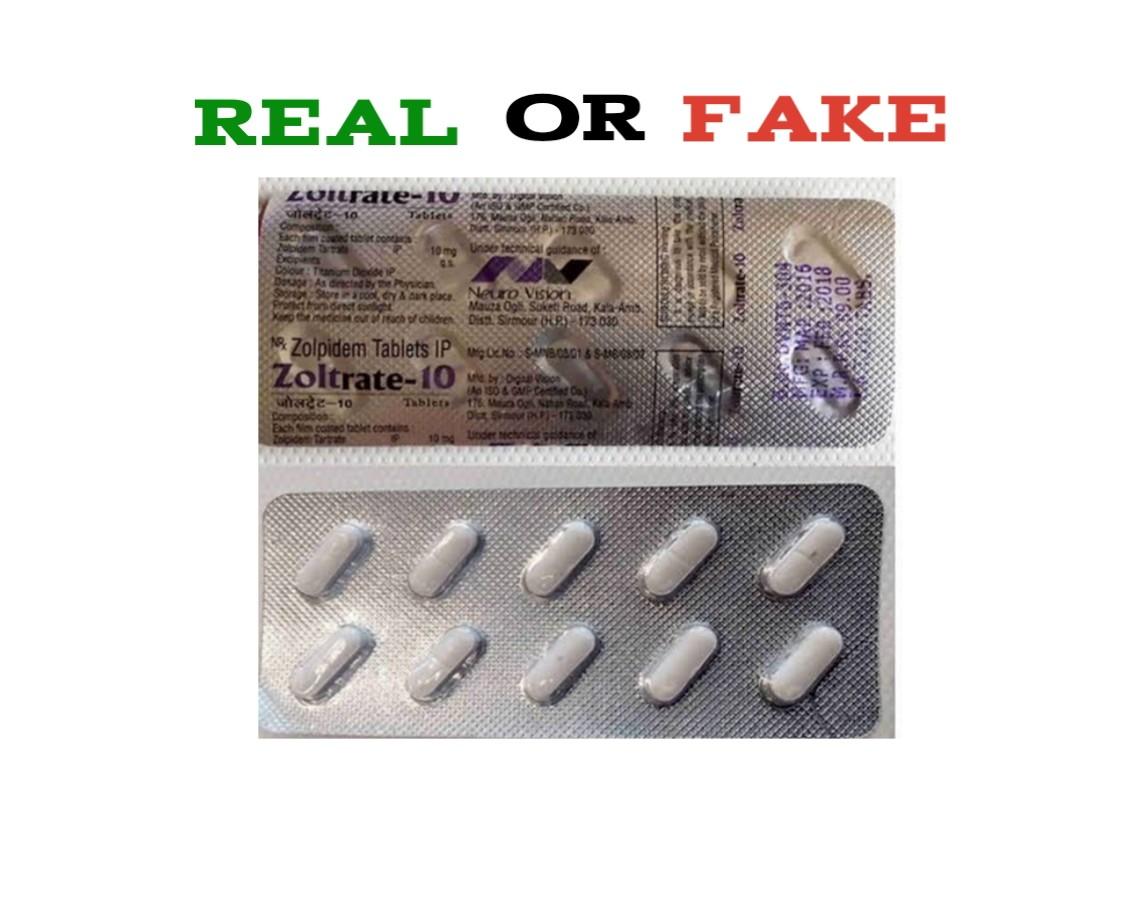 Zoltrate is a brand of Zolpidem, a sedative also called a hypnotic. Zolpidem is used to treat a certain sleep problem (insomnia) in adults. It helps you fall asleep faster and stay asleep longer, so you can get a better night’s sleep. It may also reduce the number of times you wake up during the night. Zolpidem belongs to a class of drugs called sedative-hypnotics. It acts on your brain to produce a calming effect.

The FDA (U.S. Food and Drug Administration) lowered the recommended zolpidem dose for women from 10 mg to 5 mg for immediate-release products and from 12.5 mg to 6.25 mg for extended-release products on January 10, 2013, because new data show that blood levels in some patients may be high enough the morning after use to impair activities that require alertness, including driving. Women appear to be more susceptible to this risk because they eliminate zolpidem from their bodies more slowly than men.

Zolpidem belongs to a class of drugs called sedatives. A class of drugs is a group of medications that work in a similar way. These drugs are often used to treat similar conditions. Zolpidem increases the activity of GABA. GABA is a chemical in your body that causes sleepiness. Increasing its activity helps you fall asleep.

This drug may cause changes in behavior, such as increased agitation. You may act differently. You may act more outgoing, hallucinate (see or hear things that aren’t real), or feel like you’re watching yourself from outside of your body. You also may sleep-drive or do other activities in your sleep that you can’t remember later.

Tell your doctor if any of this happens to you.

Symptoms can include muscle cramps, vomiting, sweating, flushing (reddening and warming of your skin), and emotional changes. These can include feelings of nervousness, panic attacks, and uncontrollable crying.

Zolpidem can cause a severe allergic reaction. Symptoms can include:

If you have an allergic reaction, call your doctor or local poison control center right away. If your symptoms are severe, call 911 or go to the nearest emergency room.

Eating food with zolpidem may make the drug take longer to work. You should take this drug on an empty stomach.

Drinking alcohol can increase your risk of sedation and drowsiness from zolpidem. You shouldn’t take this drug on nights when you drink alcohol. If you drink alcohol, talk to your doctor. You may need to be monitored more closely for side effects.

For people with depression: This drug may make your symptoms of depression worse. Ask your doctor if this drug is safe for you.

For people with myasthenia gravis: This drug may slow your breathing or make it shallow. This can decrease the amount of oxygen in your blood. If you have myasthenia gravis, you may already have lower oxygen levels. Ask your doctor if this drug is safe for you.

For people with sleep apnea: This drug may slow your breathing or make it shallow. This can decrease the amount of oxygen in your blood. If you have sleep apnea, you may already have lower oxygen levels. Ask your doctor if this drug is safe for you.

For people with liver disease: If you have liver problems or a history of liver disease, you may not be able to process this drug well. This may increase the levels of the drug in your body and cause more side effects. It may also cause a serious condition called hepatic encephalopathy. With this condition, the poor function of your liver causes problems with the way your brain works. Symptoms can include being confused, forgetting things, and slurring your speech. If you have severe liver damage, you should not use zolpidem.

For pregnant women: There haven’t been enough studies done in humans to be certain how the drug might affect the fetus. Research in animals has shown negative effects on the fetus when the mother takes zolpidem. But animal studies don’t always predict how humans would respond.

Studies have shown that when mothers take this drug late in their third trimester, their newborns can have slowed breathing and excessive sleepiness. Your doctor will monitor your newborn closely if exposure to zolpidem occurred during your pregnancy.

For women who are breastfeeding: Zolpidem may pass into breast milk and cause side effects in a child who is breastfed. Talk to your doctor about breastfeeding your child. You may need to decide whether to stop breastfeeding or stop taking this medication.

For seniors: The liver of an older adult may not work as well as it used to. This can cause your body to process drugs more slowly. As a result, more of a drug stays in your body for a longer time. This raises your risk of side effects, such as sedation and decreased alertness. You may also be more sensitive to these effects. If you’re over the age of 65 years, your doctor may give you a lower dosage of this drug.

For children: This drug hasn’t been studied in children. It shouldn’t be used on people younger than 18 years.

How to Spot Fake Zoltrate (Zolpidem)

A Fake drug is a drug product that is not what it purports to be. It is any drug product that is formulated or made to appear to be better than it really is. The term can also refer to a drug that is deliberately and fraudulently mislabeled with respect to identity and/or source or with fake packaging. Fake Zolpidem is responsible for many deaths, a safe medicines supply is fundamental for public health.

A few years ago, Ms. Bergeron was found dead by a friend in her bed in a normal sleeping position. Emergency services were called, but it was clear she had been dead for some time. Three types of pills were found at Ms. Bergeron’s home. One contained Zolpidem, a powerful hypnotic not available in Canada. Another contained the anti-anxiety medication Alprazolam, which is available with a prescription, and the third contained acetaminophen.

These drugs were later determined to be laced with extremely high quantities of metal. The acetaminophen pill had 15 times the amount of aluminum that would be fatal, Ms. Stanton said. An autopsy showed that Ms. Bergeron died of cardiac arrhythmia stemming from metal toxicity.

In the weeks and months leading up to her death, she complained of flu-like symptoms. Ms. Bergeron said, in e-mails to a friend, that her hair was falling out, and she suffered from nausea, diarrhea, aching joints, and blurry vision.

When the pills were tested, they were of such poor quality, the ingredients seemed “mashed together”. The mixture of drugs and metal in each pill would vary depending on which portion was examined.

A consumer may not have access to most of the test equipment used by regulatory bodies to verify the identity of a drug product but there are simple guidelines that can help identify a fake Zolpidem.

Check the Zolpidem Packaging: This is the simplest and the easiest method to check the authenticity of  Zolpidem. Check the packaging for details like unusual fonts, print color, and missing logo. Analyze whether it appears the same or different from the one you have used before.

No Breakage in the Seal: A Zolpidem packet that comes with a security seal should not be damaged. Look for a crack or break in the sealing tape.

Check the Zolpidem Dosage Form: Look for dissimilarities in the physical appearance of the drug like its color, size, uniformity, consistency, shape, etc. Remember FDA (U.S. Food and Drug Administration) lowered the recommended Zolpidem dose for women from 10 mg to 5 mg for immediate-release products and from 12.5 mg to 6.25 mg for extended-release products on January 10, 2013.

Allergies / Unexpected Side Effects from using Zolpidem: Most medicines including Zolpidem have side effects. It is important to consult your doctor before the usage to keep a check on allergies arising from it. If you notice certain unexpected or harmful side effects from your medication, report to your doctor immediately.

Price of Zolpidem: If the price of a Zolpidem is suddenly far cheaper than the usual rate, double check the product as there may be a chance that the fake companies wanted to lure customers by providing medicines at much cheaper rates.

Verify Online or SMS: Many countries have unique methods for the verification of the genuineness of pills using authentication codes or other online portals to confirm the authenticity of the Zolpidem being purchased. SEE: What Does Fake Ambien (Zolpidem) Looks Like

How To Spot Fake Lisinopril ( Zestril/Prinvil)

How To Spot an IP 204 fake
Zoltrate fake
July 19, 2022 Family & Community HealthPublic HealthComments Off on How to Spot Fake Zoltrate (Zolpidem)