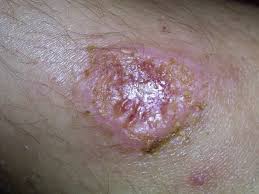 Glucantime (Meglumine antimoniate) is a pentavalent antimony (SbV) recommended by the World Health Organization as the first-choice drug for the treatment of leishmaniasis a disease caused by an intracellular protozoan parasite (genus Leishmania) transmitted by the bite of a female phlebotomine sandfly. The clinical spectrum of leishmaniasis ranges from a self-resolving cutaneous ulcer to a mutilating mucocutaneous disease and even to a lethal systemic illness.

Meglumine antimoniate or miltefosine are used for the medical treatment of leishmaniosis, often combined with allopurinol. The condition of the patient improves after the onset of therapy, but the cure can take months. It is common that the patient undergoes a relapse of the disease after the medical treatment. After the initiation of therapy, there are fairly poor chances to visualize amastigotes in histopathology or cytology anymore. Vaccines have been developed against canine leishmaniosis, but their efficacy is not perfect.

In recent times, the battle against some neglected diseases have suffered setbacks because of the activities of criminal gangs and their collaborators, according to a medical product alert issued by the World Health Organization (WHO), falsified meglumine antimoniate ampoules for the treatment of leishmaniosis are circulating under the brand names GULUCATIME and GLUCANTIME at patient level in the medicines markets of Iran and Pakistan, respectively.

The medicines comes in carton packs each containing five ampoules. The labelling is either in English and French together or in English language alone. Various spelling faults can be observed in both languages. The labels claim that both products have been manufactured for Tillotts Pharma AG. The company stated exists but has confirmed that they do not produce, sub-contract the production, nor distribute the products under investigation anywhere in the world.

More details, for example, batch numbers and expiry dates of the fake products GULUCATIME and GLUCANTIME are displayed in the WHO medical product alert N°7/2019 at https://www.who.int/medicines/publications/drugalerts/en.

SEE: How To Promote Personal, Domestic and Community Hygiene

How to Spot Fake Harvoni