How to Spot Fake Augmentin 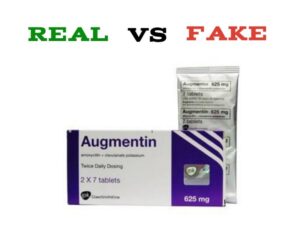 Augmentin is effective for treating infections caused by many different types of bacteria. These include bacteria that cause:

Augmentin comes in three forms, all of which are taken by mouth:

The Augmentin dosage your doctor prescribes will depend on several factors. These include:

The following information describes dosages that are commonly used or recommended. However, be sure to take the dosage your doctor prescribes for you. Your doctor will determine the best dosage to suit your needs.

The three forms of Augmentin come in different strengths:

For the strengths listed above, the first number is the amoxicillin amount and the second number is the clavulanic acid amount. The ratio of drug to drug is different for each strength, so one strength can’t be substituted for another.

How to Spot Fake Augmentin Tablets and Suspension

A safe medicines supply is fundamental for public health. A fake drug is a drug product which is not what it purports to be. It is any drug product which is formulated or made to appear to be better than it really is. The term can also refer to a drug which is deliberately and fraudulently mislabeled with respect to identity and/or source or with fake packaging. Falsified medicines are often the business of criminal cartels.

Last year, the World Health Organization (WHO) issued an alert on fake versions of the Augmentin discovered in Uganda and Kenya. In addition, the Kenya Pharmacy and Poisons Board confirmed that the same batch of falsified Augmentin had previously been found at patient level in Kenya. Fake Augmentin is a common feature in Nigeria, Ghana and Cameroon. The real Augmentin is a fixed-dose combination medicine consisting of amoxicillin and clavulanic acid but the fake version contained no antibacterials whatsoever. Fake “Augmentin” 625 mg tablets and blister pack with tropical protection wrap and patient box are all made by counterfeiters with high professional “standard” but without any antibacterial medicines inside. 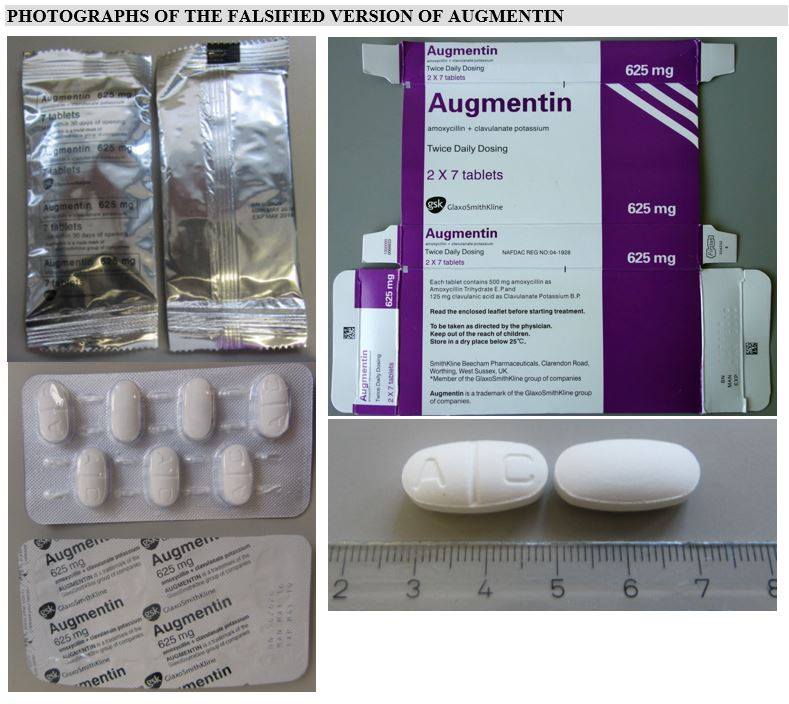 A consumer may not have access to most of the test equipment used by regulatory bodies to verify the identity of a drug product but there are simple guidelines that can help identify a fake Augmentin pill:

Check the Augmentin pill Packaging: This is the simplest and the easiest method to check the authenticity of   Augmentin. Check the packaging for details like unusual fonts, print color, and missing logo. Analyze whether it appears the same or different from the one you have used before.

No Breakage in the Seal: An Augmentin  packet that comes with a security seal should not be damaged. Look for a crack or breaks in the sealing tape.

Check the Augmentin pill Dosage Form: Look for dissimilarities in physical appearance of the drug like its color, size, uniformity, consistency, shape, etc.

Allergies / Unexpected Side Effects from using Augmentin: Most of the medicines including Augmentin pill have side effects. It is important to consult your doctor before the usage to keep a check on allergies arising from it. If you notice certain unexpected or harmful side effects from your medication, report to your doctor immediately.

Price of Augmentin pill: If the price of an Augmentin pill is suddenly far cheaper than the usual rate, double check the product as there may be a chance that the fake companies wanted to lure customers by providing medicines at much cheaper rates.

Verify Online or SMS: Many countries have unique methods for the verification of the genuineness of pills using authentication code or other online portals to confirm the authenticity of the Augmentin pill being purchased.

General Side Effects You Should Expect From a Genuine Augmentin

The more common side effects of Augmentin include:

Liver problems. It’s not common, but some people who take Augmentin can develop liver damage. This seems to be more common in seniors and those who take Augmentin for a long time. Usually these problems go away when the medication is stopped, but in other cases, they may be severe and require treatment. Tell your doctor if you develop symptoms of liver problems while taking Augmentin. Your doctor may do blood tests to check for liver damage. Symptoms can include:

Many medications, including Augmentin, can cause rash in some people. This is a common side effect of Augmentin, which is a penicillin-type antibiotic. This class of antibiotics causes skin rash more often than most other kinds of antibiotics. Rash occurs in about 3 percent of people who take Augmentin.

Raised, itchy, white, or red bumps that occur after the first couple doses of Augmentin may indicate an allergy to the medication. If this occurs, contact your doctor. If you have an allergic reaction, you may need to be treated with a different antibiotic. Rashes that develop several days after you take the medication and appear as flat, red patches often indicate a different kind of rash that’s not caused by an allergic reaction. These usually go away on their own after a few days.

Fatigue is not a common side effect of Augmentin. However, it’s common for people who are fighting infections to feel fatigued, tired, or weak. If you become fatigued after starting Augmentin, or your symptoms are not improving, talk to your doctor.

Vaginal yeast infections can sometimes occur after treatment with antibiotics, including Augmentin. If you’ve never had a yeast infection before and think you might have one, see your doctor for a diagnosis and treatment.

Side effects in children

Can I Take Augmentin For Urinary Tract Infection (UTI)

How To Spot Fake DAN 5620 Diazepam Pills
FAKE Augmentin
December 9, 2020 Health FeaturesPublic HealthComments Off on How to Spot Fake Augmentin