How to Spot E712 Pill Fake Vs Real 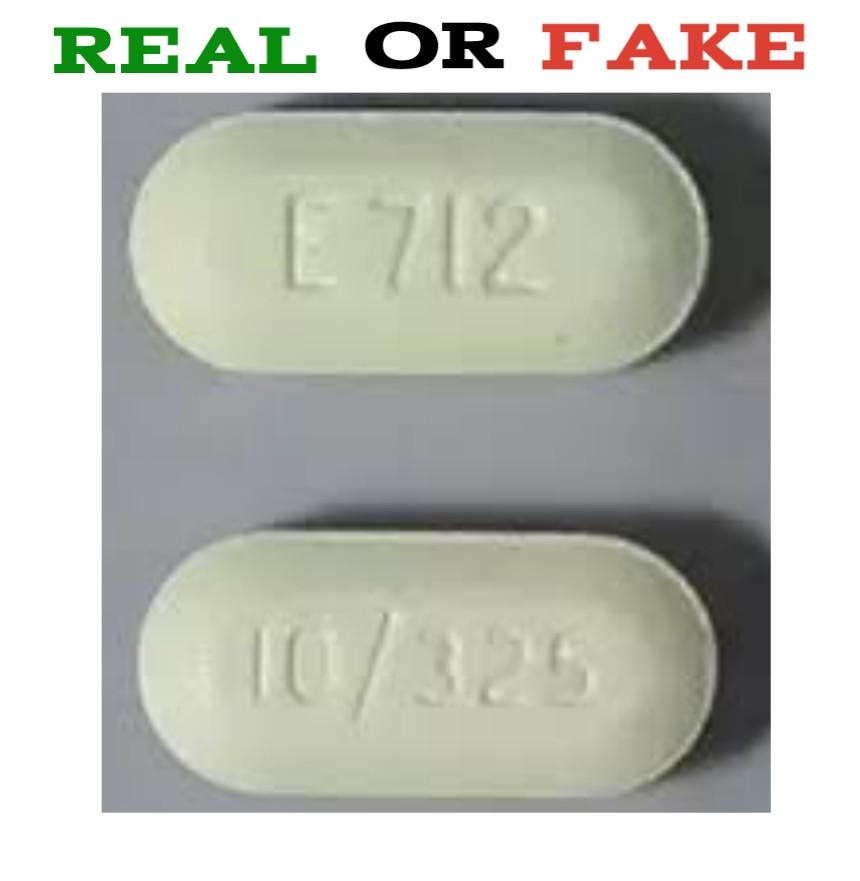 The original yellow pill with the imprint E712 10/325 contains acetaminophen 325 mg and 10 mg oxycodone, it is supplied by Endo Pharmaceuticals Inc. Oxycodone and acetaminophen combination is used to relieve pain severe enough to require opioid treatment and when other pain medicines did not work well enough or cannot be tolerated.

Acetaminophen is used to relieve pain and reduce fever in patients. It does not become habit-forming when taken for a long time. But acetaminophen may cause other unwanted effects when taken in large doses, including liver damage. Oxycodone belongs to the group of medicines called narcotic analgesics (pain medicines). It acts on the central nervous system (CNS) to relieve pain.

A Fake drug is a drug product which is not what it purports to be. It is any drug product which is formulated or made to appear to be better than it really is. The term can also refer to a drug which is deliberately and fraudulently mislabeled with respect to identity and/or source or with fake packaging.

The deadly consequences of using counterfeit E712 Pill are well understood to be a challenge to the integrity of public health systems round the globe, and also a threat to our individual health and welfare. Fake E712 Pill are responsible for many opioid related deaths.

In their latest report on fake online pharmacies that ply their trade in the United States, the National Association of Boards of Pharmacy (NABP) found more than 1,500 new websites that it considers “Not Recommended,” and of these, 31% are offering illicit prescription drugs, such as codeine, fentanyl, oxycodone, Adderall, Valium, and Acetaminophen and Oxycodone. Falsified medicines are often the business of criminal cartels. Fentanyl laced pills are responsible for most overdose deaths involving drugs that triggers highs. Fentanyl is a powerful synthetic opioid that is similar to morphine but is 50 to 100 times more potent. According to CNN, two synthetic opioids have been found in the fake pain pills suspected in a cluster of overdoses.

With plenty of pills flooding the streets, fake pills has surpassed heroin for overdose deaths and has touched all demographic groups. According to reports, these pills that sell for $9 to $30 each also took the lives of a 17-year-old star high school baseball pitcher from a Phoenix suburb and a pair of 19-year-old best friends and prominent former high school athletes in Arizona.

To make matters worse, the CDC says there is an acceleration of overdose deaths during the pandemic. Nationwide, they rose to 26% in the 12 months ending in May. COVIID circumstances have more people seeking addiction and mental health help, but treatment centers are in short supply, which is exacerbating opioid overdose deaths.

A consumer, may not have access to most of the test equipment used by regulatory bodies to verify the identity of a drug product but there are simple guidelines that can help identify a fake E712 Pill;

Check the E712 Pill Packaging: This is the simplest and the easiest method to check the authenticity of  E712 Pill. Check the packaging for details like unusual fonts, print color, and missing logo. Analyze whether it appears the same or different from the one you have used before.

No Breakage in the Seal: An E712 Pill packet that comes with a security seal should not be damaged. Look for a crack or breaks in the sealing tape.

Check the E712 Pill Dosage Form: Look for dissimilarities in physical appearance of the drug like its color, size, uniformity, consistency, shape, etc.

Allergies / Unexpected Side Effects from using E712 Pill: Most of the medicines including  E712 Pill have side effects. It is important to consult your doctor before the usage to keep a check on allergies arising from it. If you notice certain unexpected or harmful side effects from your medication, report to your doctor immediately.

Price of E712 Pill: If the price of  a E712 pill is suddenly far cheaper than the usual rate, double check the product as there may be a chance that the fake companies wanted to lure customers by providing medicines at much cheaper rates.

Verify Online or SMS: Many countries have unique methods for the verification of the genuineness of pills using authentication code or other online portals to confirm the authenticity of the E712 Pill being purchased.

Fentanyl testing is one of the most reliable ways of telling a fake from a real E712  pill. A new University of Maryland study found Fentanyl tops the list of drugs detected in overdose patients at two Baltimore hospital emergency departments. The finding suggests that hospitals and medical systems throughout the United States consider adding Fentanyl, a potent synthetic opioid linked to most fatal overdoses in Maryland, to their routine drug testing panels. That is the conclusion of researchers at the University of Maryland School of Medicine (UMSOM) and the Center for Substance Abuse Research (CESAR) at the University of Maryland, College Park. Currently, fentanyl is not routinely included in these panels nationwide. The procedure described below can help law enforcement agents and public health officials to pick out  fentanyl laced powders and pills.

ALSO READ: How to Spot Fake U03 Pill Vs Real