How To Identify Good Palm Oil vs Fake 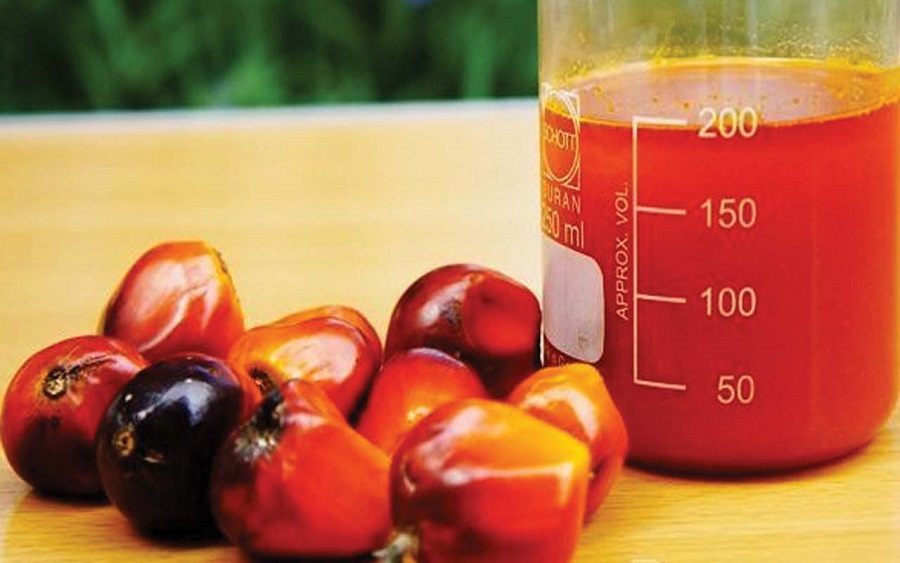 Palm oil is the most widely-used vegetable oil in the world. Palm oil is squeezed from the fruits of the oil palm tree (Elaeis Guineensis). Originally found in West Africa, the oil palm tree is now mostly cultivated in Indonesia and Malaysia, the world’s largest palm oil-producing nations. Indonesia and Malaysia supply 85 per cent of the palm oil used globally. Palm oil is in nearly everything, it’s in close to 50% of the packaged products we find in supermarkets, everything from pizza, doughnuts and chocolate, to deodorant, shampoo, toothpaste and lipstick. It’s also used in animal feed and as a biofuel in many parts of the world (not in the UK though!). This oil is a staple in West African and tropical cuisines, and it’s especially well suited for curries and other spicy dishes. In Nigeria, no soup is complete without palm oil. SEE: Best Cooking Oil in Nigeria

Two types of oil can be produced; crude palm oil comes from squeezing the fleshy fruit, and palm kernel oil which comes from crushing the kernel, or the stone in the middle of the fruit.

Palm oil is an excellent source of tocotrienols, a form of vitamin E with strong antioxidant properties that may support brain health. Animal and human studies suggest that the tocotrienols in palm oil may help protect the delicate polyunsaturated fats in the brain, slow dementia progression, reduce the risk of stroke and prevent the growth of brain lesions. In a two-year study of 121 people with brain lesions, the group who took palm oil-derived tocotrienols twice a day remained stable, whereas the group who received a placebo experienced lesion growth.

Palm oil has been credited with providing protection against heart disease. Although some study results have been mixed, this oil generally appears to have beneficial effects on heart disease risk factors, including lowering “bad” LDL cholesterol and increasing “good” HDL cholesterol. A large analysis of 51 studies found that total and LDL cholesterol levels were lower in people who followed palm oil-rich diets than those who consumed diets high in trans fats or myristic and lauric acid.

Palm oil can help improve vitamin A status in people who are deficient or at risk of deficiency. Studies in pregnant women in developing countries have shown that consuming red palm oil increases vitamin A levels in their blood, as well as in their breastfed infants. One study found that people with cystic fibrosis, who have difficulty absorbing fat-soluble vitamins, experienced an increase in blood levels of vitamin A after taking two to three tablespoons of red palm oil daily for eight weeks. Red palm oil has also been shown to help boost vitamin A levels in adults and young children. 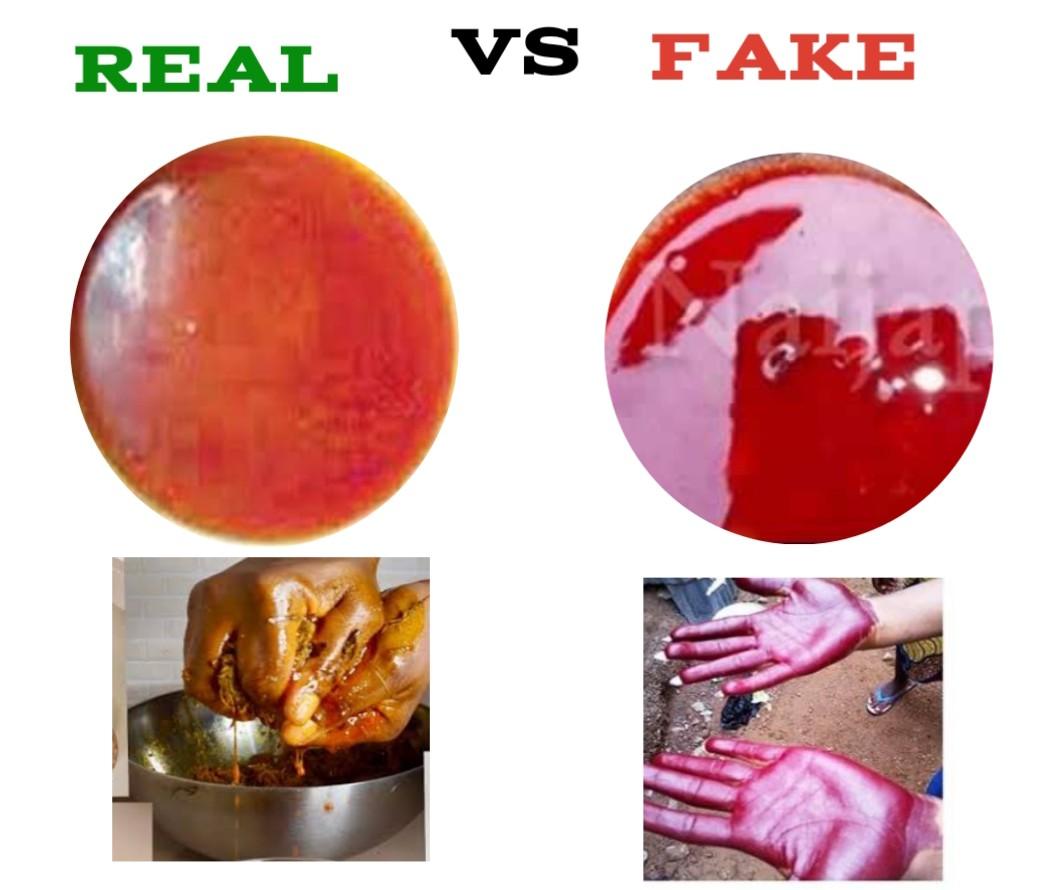 How To Identify Good Palm Oil vs Fake

Palm oil adulteration is a very common practice in West Africa especially Nigeria where the commodity is highly sought after. A good quality palm oil is produced from mature and ripe palm fruits; unfortunately, a reasonable percentage of palm oil available in the country’s markets today is far from pure original palm oil. And this is ignorantly consumed by the public.

Fake palm oil is produced by mixing a pigment of oil-red material with a little quantity of palm oil to multiply. The quantity of palm oil in the mixture determines the grade of the product. Thus, you find ‘first original’ and ‘second original’, all circulating as pure original palm oil in the markets. This product is a bit difficult to differentiate from the original palm oil as it has almost the same colour but slightly different in taste and scent, and lacks all the values/characteristics of pure palm oil stated above. It does not mix properly in liquid foods either hot or cold as it is found floating and gives no palm oil flavor or quality even as it appears so oil-red concentrated. READ: Smoke Point Of Oils And Fats 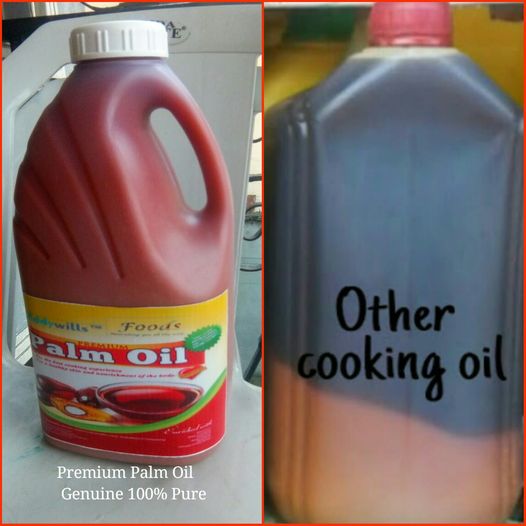 What are the qualities of a good Palm oil?

Quality is an important attribute of edible oil products and it is a very important attribute from the trade point of view. With the growing innovations of product developments and improvements, there is an increasing demand for quality improvement from consumers and end-users of palm oil products. To meet this growing need for method standardization, there are many organizations around the world which are involved with development and publication of standard methods of analysis for oils and fats, some of which are listed below.

Oxidation of lipids is a major cause of their deterioration, and hydroperoxides formed by the reaction between oxygen and the unsaturated fatty acids are the primary products of this reaction. Hydro peroxides have no flavor or odors but break down rapidly to form aldehydes, which have a strong, disagreeable flavor and odors. The peroxide concentration, usually expressed as peroxide value, is a measure of oxidation or rancidity in its early stages. Hence, this parameter gives a measure of the extent to which an oil sample has undergone primary oxidation. Peroxide value (PV) measures the concentration of substances (in terms of milliequivalents of peroxide per 1000 grams of sample) that oxidize potassium iodide to iodine.

During the oxidation of polyunsaturated fatty acids such as linoleic acid (C18:2), displacement of the double bonds and formation of conjugated bonds (alternating single and multiple bonds) takes place. The latter absorb highly in the ultraviolet region at 233 nm. The secondary oxidation products (aldehydes and ketones) and trienes absorb in the region of 269 nm. Thus, ultra-violet measurements at 233 and 269 nm are related to conjugated dienes, trienes and keto-dienes formed during oxidation of oils and fats.

The method is based on the fact that in the presence of acetic acid, p-anisidine reacts with the aldehydic compounds in an oil, producing yellowish reaction products. The color intensity depends not only on the amount of aldehydic compounds present, but also on their structure.

Deterioration of Bleachability Index (DOBI) was added as a quality parameter for measurement of crude palm oil quality at the turn of the millennium. The DOBI index was developed by Dr. P.A.T Swoboda in MPOB (then PORIM) in the 1980s. The DOBI value was used as a guide as to how easily a sample of crude palm oil can be bleached. The DOBI value is a numerical ratio of the UV absorbance of the sample at 446 nm to the absorbance at 269 nm. Hence, it is interplay between the amounts of carotene (UV 446nm) present in the crude palm oil to the amounts of secondary oxidation products (UV 269nm) present in the oil. This is because the carotenes present in crude palm oil will be the first to be sacrificed in protecting the oil from oxidation, due to its high number of double bonds. The higher the DOBI value, the easier it is to bleach the oil through heat and absorptive cleansing bleaching.

Crude palm oil over 3 is considered to be good while average quality palm oils have DOBI values above 2.3.

The main causes of a low (poor) DOBI are:

There are other causes, but these are less significant compared with the above causes. These include splashing/aeration of hot oil, delay in processing due to temporary machinery breakdown, high-temperature crude oil clarification and high-temperature processing at other stages.

Side Effects of Palm Kernel Oil

How To Identify Fake Engine Oil