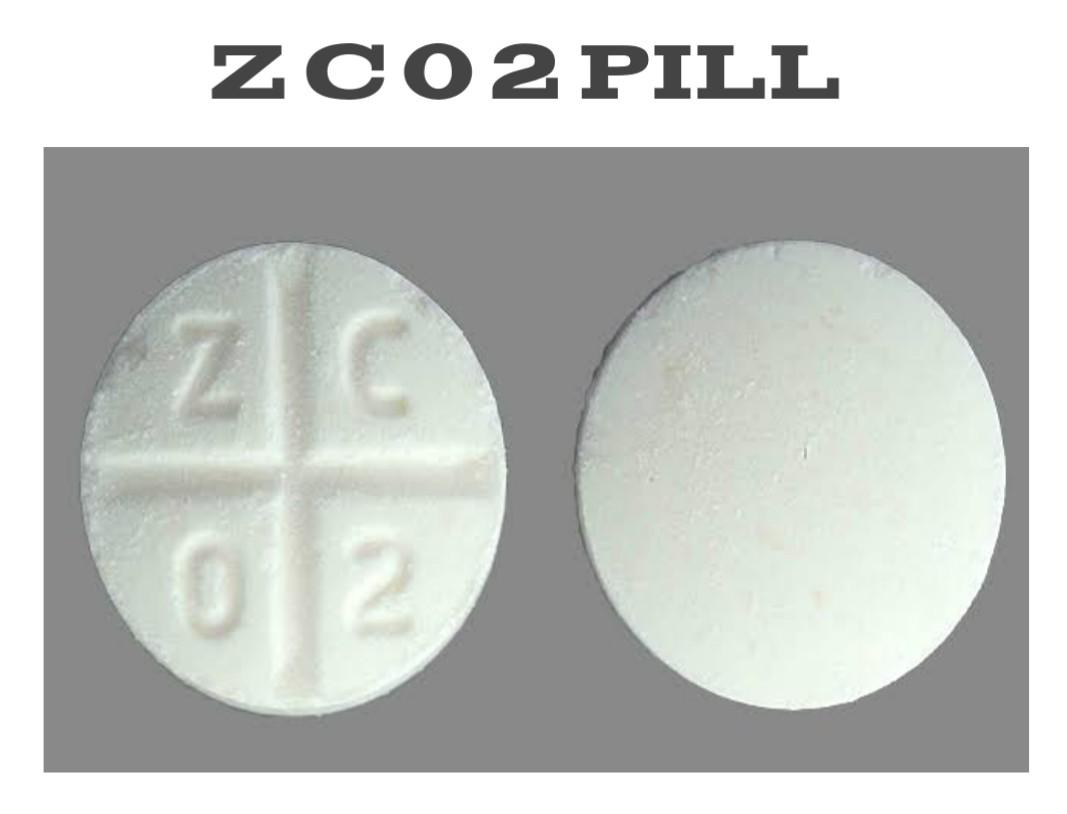 The white pill with the imprint Z C 0 2 has been identified as containing Promethazine Hydrochloride 25 mg. Promethazine was developed in the mid-1940s when a team of scientists from the French chemical manufacturing company Rhône-Poulenc combined phenothiazine and a diamine side chain of diphenhydramine to create a new drug.

Their creation, promethazine, is a synthetic medication that belongs to a pharmaceutical family known as phenothiazines. Promethazine is used in the treatment of light sedation; allergic reactions; anaphylaxis; allergic rhinitis; motion sickness.

ZC02 Pill works on histamine receptors to relieve allergy symptoms. It can also be used to treat nausea and motion sickness. Promethazine may have weak effects at other receptors (such as dopamine). Promethazine belongs to the class of medicines known as phenothiazines.

May be used in the treatment of rhinitis (vasomotor and allergic), conjunctivitis due to allergies or foods, mild urticaria (itchy rash) and other allergic reactions. May also be used together with epinephrine for more severe allergic reactions (such as anaphylaxis) after the acute event has been controlled. May be used for the prevention or treatment of motion sickness.

May be used as a sedative pre- or post-operatively or in women during labor. Relieves apprehension and produces a light sleep from which a person can be easily aroused. May also be used in the prevention and control of nausea associated with surgery or anesthesia.

FD&C Yellow No. 5 (tartrazine) is contained in some products. This may cause allergic-type reactions (including bronchial asthma) in certain susceptible persons; people with an aspirin hypersensitivity may be more at risk.

Rarely may cause unusual symptoms such as oculogyric crisis (prolonged upward deviation of the eyes) torticollis (head involuntarily turned to one side) and tongue protrusion. Confusion, tinnitus (ringing in the ears), hyperexcitability and seizures have also been reported. Should be used with caution in people with bone-marrow depression.

Occasionally, paradoxical reactions (the opposite of what is to be expected) may occur. Symptoms include excitability and nightmares. Children and elderly people may be more prone to these effects.

May interact with a number of other drugs including antidepressants, antipsychotics, and other drugs that cause sedation.

Notes: In general, seniors or children, people with certain medical conditions (such as liver or kidney problems, heart disease, diabetes, seizures) or people who take other medications are more at risk of developing a wider range of side effects.

ZC02 Pill may be used to relieve allergy symptoms and nausea. Sedation is the main side effect.

When used as a sedative, administer just before bedtime. When used to prevent motion sickness, administer 30 minutes to one hour before travel.

Available in tablet, solution, syrup or suppository form. Use the lowest dose possible to relieve your symptoms. Do not take more than the recommended amount.

Do not use in children under the age of 2 years as a number of cases of respiratory depression (marked slow-down in breathing) have been reported, some fatal.

Caution when using in children over 2 years. Use the lowest possible dose under medical advice.

Avoid prolonged exposure to the sun.

Report any unusual muscle movements to a doctor.

Response and Effectiveness of ZC02 Pill

ZC02 Pill effects are noticeable within 20 minutes of oral administration. Its effects last for 4-6 hours, although they may persist for up to 12 hours in some people.

Medicines that interact with ZC02 Pill may either decrease its effect, affect how long it works for, increase side effects, or have less of an effect when taken with promethazine. An interaction between two medications does not always mean that you must stop taking one of the medications; however, sometimes it does. Speak to your doctor about how drug interactions should be managed.

Common medications that may interact with ZC02 Pill include:

Note that this list is not all-inclusive and includes only common medications that may interact with promethazine. You should refer to the prescribing information for promethazine for a complete list of interactions. SEE: 44334 White Pill