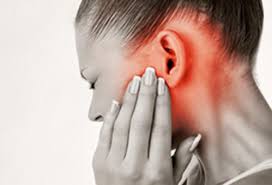 What is a middle ear infection?

What are the types of middle ear infections?

Acute otitis media: This type of ear infection comes on quickly and is accompanied by swelling and redness in the ear behind and around the eardrum. Fever, ear pain, and hearing impairment often occur as a result of trapped fluid and/or mucous in the middle ear.

Otitis media with effusion: After an infection goes away, sometimes mucous and fluid will continue to build up in the middle ear. This can cause the feeling of the ear being “full” and affect your ability to hear clearly.

What causes a middle ear infection?

There are a number of reasons why children get middle ear infections. They often stem from a prior infection of the respiratory tract that spreads to the ears. When the tube that connects the middle ear to the pharynx (eustachian tube) is blocked, fluid will collect behind the eardrum. Bacteria will often grow in the fluid, causing pain and infection.

What are the symptoms of a middle ear infection?

There are a variety of symptoms associated with middle ear infections. Some of the most common are:

A contagious disease is a subset category of transmissible diseases, which are transmitted to other persons, either by physical contact with the person suffering the disease or by casual contact with their secretions or objects touched by them or airborne route among other routes. Ear infections are not contagious or spread from one person to another, but the colds that result in ear infections are. Colds are spread when germs are released from the nose or mouth during coughing or sneezing. Anything that can reduce the spread of germs will help reduce ear infections.

Because most ear infections occur in children under the age of three, parents can play an active role in preventing them:

You should also remember:

Your doctor will make sure they have your child’s medical history and will do a physical examination. During the exam, your doctor will look at the outer ear and eardrum using a lighted instrument called an otoscope to check for redness, swelling, pus, and fluid.

Your doctor might also conduct a test called tympanometry to determine whether the middle ear is working properly. For this test, a device is put inside your ear canal, changing the pressure and making the eardrum vibrate. The test measures changes in vibration and records them on a graph. Your doctor will interpret the results.

Can Allergies Cause Recurring Ear Infections?

How To Get Water Out Of Your Ear Easily