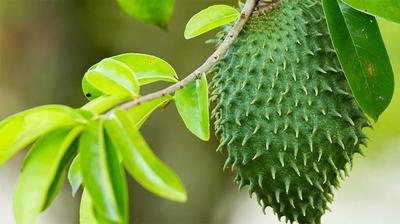 Soursop, (Annona muricata), also called guanabana, graviola, or Brazilian pawpaw, tree of the custard apple family (Annonaceae), grown for its large edible fruits. Native to the American tropics, the tree has been widely introduced in the Old World tropics. The entire tree including the leaves, the bark and even the root has been used to cure a number of ailments.

What does Soursop Leaves contain?

Research suggests that Soursop leaf has a number of health benefits which include :

Soursop may have a number of antioxidant properties. Antioxidants keep cells healthy by hunting disease-causing free radicals in the body and destroying them. According to a 2014 study, Soursop extract has many compounds with antioxidant abilities.

According to a 2014 study on rodents, Soursop has anti-inflammatory properties that may relieve pain. The study’s researchers supported Soursop’s use as a folk remedy for pain and inflammatory conditions. A 2010 rodent study found Soursop blocked pain receptors and reduced inflammation in rats. Still, researchers cautioned more study is needed to determine if Soursop is safe for humans. It is unclear if it would have the same pain-relieving effects.

The results of a 2008 rodent study suggest Soursop may help people regulate their blood sugar if they have diabetes. The study found that Soursop significantly reduced blood glucose levels in rats with diabetes. In addition, despite the rats being fed less food and water, they didn’t lose weight. Researchers believe this may be the result of better glucose control.

Soursop is often used as a folk remedy to lower blood pressure. Uncontrolled high blood pressure may increase the risk of heart disease, diabetes, and stroke. A 2012 study on rats found Soursop helped reduce blood pressure without increasing heart rate. According to researchers, the herb’s hypotensive abilities are due to peripheral mechanisms involving antagonism of Ca²⁺ [calcium ions].

Ulcers are painful sores that develop in the stomach lining, esophagus, or small intestine. According to a 2014 study on rodents, Soursop showed antiulcer abilities. It helped protect the stomach’s mucous lining. It also helped prevent free radical damage to the digestive tract.

Herpes is a viral infection caused by the herpes simplex virus. It may appear on the genitals or mouth. Soursop is considered an alternative treatment for herpes, but the supporting evidence is still coming in. A 2012 study showed antiherpes activity with Soursop in the laboratory. According to a 1999 study, Soursop extract may have antiviral effects against herpes simplex 2 virus (HSV-2). HSV-2 is responsible for most cases of genital herpes outbreaks. In vitro, Soursop was toxic to HSV-2 cells. In vitro means outside a living body.

There is some evidence that soursop may battle some types of cancer. According to 2016 in vivo and in vitro research, Soursop extract was toxic against some breast cancer cell lines. In vivo means inside a living body, the opposite of in vitro. It also increased T cells. T cells are lymphocytes in the body that kill cancer cells and other damaged cells. A 2012 in vivo and in vitro study found Soursop may be beneficial against some pancreatic cancer cell lines by inhibiting cellular metabolism. Still, researchers caution Soursop alone is not enough to eradicate pancreatic tumors. It should not be used as a primary treatment. Studies are ongoing to evaluate the efficacy of Soursop as an adjuvant therapy for pancreatic cancer.

The appropriate dose of Soursop depends on several factors such as the user’s age, health, and several other conditions. At this time there is not enough scientific information to determine an appropriate range of doses for Soursop. Keep in mind that natural products are not always necessarily safe and dosages can be important. Be sure to follow relevant directions on product labels and consult your pharmacist or physician or other healthcare professional before using.

In general, Soursop may cause nerve damage and movement problems, especially with long-term use. It may also cause serious neuropathy that leads to Parkinson-like symptoms, such as tremors or stiff muscles. If someone has Parkinson’s disease, Soursop may make their symptoms worse.

Soursop may be toxic to the kidneys or liver with repeated use. People should not use Soursop if they have liver or kidney problems.

Those considering using Soursop should also talk to their doctor before use if they:

SEE: How to Use Pawpaw Leaves For Menstrual Pain

SEE HOW TO MAKE SOURSOP TEA

Health Benefits and Side Effects of Pumpkin Leaves