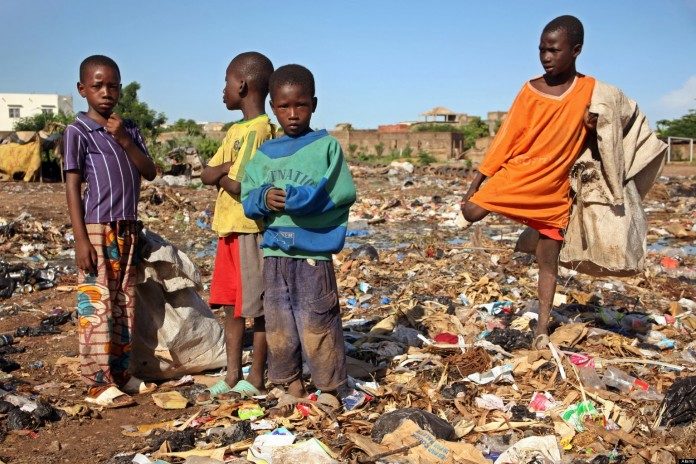 According to the World Bank, the International Poverty Line refers to those who have less than 1.25 US dollars a day to live, and thus live on the very edge of existence. The United Nations Development Program (UNDP) sets various indicators in its Human Development Index (HDI) to measure poverty in Africa and all other countries in the world. This includes:

As the indicators show, education is closely linked to poverty by the United Nations – because those who can not read and write have little chance of getting a skilled job and build their livelihood. Africa is the world’s last frontier in the fight against extreme poverty. Today, one in three Africans (422 million people) live below the global poverty line. They represent more than 70 percent of the world’s poorest people. The pace of  net poverty reduction is currently very small: only 367 people per day.

Somalia, officially the Federal Republic of Somalia, is a sovereign country in the Horn of Africa. It is bordered by Ethiopia to the west, the Gulf of Aden to the north, the Guardafui Channel and Somali Sea to the east, and Kenya to the southwest. Somalia has the longest coastline on Africa’s mainland but remains  poorest country in Africa. This country has a poverty rate of 73%, according to UNDP statistics. The country has 70% of its population under the age of 30 with a wide range of social, economic and political challenges facing this young population. Youth unemployment rate is 67%, one of the highest in the world. Save the children is confronting this reality with a focus on tackling child poverty in Somalia.

Nevertheless, its residents still face famine, poverty and droughts. Below are 10 facts about poverty in Somalia:

Somalia is among the world’s poorest nations, according to its national GDP and other poverty indicators. The government’s instability contributes greatly to this problem. In addition, incessant threats to food and water security maintain poor standards of living.

As a direct consequence of famine, disease and violence, the life expectancy of the average Somali is extremely low. In addition, diseases like malaria continue to harm the population. Life expectancy is low as a result of high infant and maternal mortality rates, the spread of preventable diseases, poor sanitation, chronic malnutrition, and inadequate health services.

According to UNICEF, “45 percent have access to improved water sources, up from 15 percent since 2011.” Even though this is a major improvement, more than half of the population still lacks access to these water sources. As a result, unclean water can lead to severe and life-threatening health issues such as cholera.

More than two decades of conflict have nearly destroyed Somalia’s educational system, which is characterized by poor quality, insufficient numbers of qualified teachers, and inadequate resources. The educational deficit in Somalia is one of the most acute in the world. UNICEF also estimated that bout 60 percent children within Somalia in 2015 were not enrolled in school. In addition, Rural and nomadic communities in particular have little to no access to education.

These individuals lack adequate access to food, water, and shelter. In addition, many of these internally displaced persons are women and children. The UN estimates that there are 2.6 million internally displaced people in Somalia. Most are living in urban areas ostensibly under the control of the government and African Union peacekeepers (African Union Mission in Somalia, or AMISOM).

According to the UN, half of the victims were children. The famine has its roots in severe droughts, as well as violent conflicts between groups. Droughts continue to affect communities within Somalia and further threaten food security. Although largely described by the media as being caused by drought, the Somalia famine of 2011 was caused by multiple factors including drought, but also conflict, rapidly-rising global food prices, and other long-standing, structural factors.

The child mortality rate in Somalia is among the highest in the world. One out of seven Somali children dies before they turn five, measuring at a rate of 137 deaths per 1,000 live births with a staggering number in the south and central areas of Somalia. This is attributed to disease, hunger and lack of proper health care. According to World Health Organization (WHO), lower respiratory infections is still the leading cause of deaths in Somalia, followed by diarrhoeal diseases, measles, malnutrition, tuberculosis, meningitis and maternal conditions.

Malnutrition persists in Somalia due to years of conflict, the collapse of basic social services and the erosion of resilience over time. … When acute malnutrition becomes severe, children can die. Globally, 45 percent of all child deaths are associated with malnutrition. However, organizations like UNICEF are attempting to treat these children. UNICEF states that 91 percent of children treated for severe acute malnutrition recovered.

The entire population of Somalia is at risk of malaria, with 54% at high risk. The intensity of malaria transmission varies in different parts of the country, ranging from unstable and epidemic-prone in NEZ/Puntland and NWZ/Somaliland, to moderate in Central Zone and moderate to high in the South Zone. Children are amongst the most vulnerable to this illness. As a result, UNICEF and the Global Fund have provided Insecticide-treated mosquito nets to help fight the epidemic.

Bad governance, weak leadership, manmade and natural disasters and terrorism have crippled Somalia’s economy and political and social institutions. Al-Shabab, founded in 2006, is a United States–designated Foreign Terrorist Organization that is fighting for the creation of its interpretation of a fundamentalist Islamic state. An example of a militant organization born in the time of civil war in Somalia, the group has largely contributed to warfare and unrest in the country.

Over the years, Al-Shabab grew in number, created links with other terrorist organizations, and gained control of most of southern and central Somalia. When a famine plagued the nation between 2010 and 2012, the militant group exacerbated conditions by putting pressure on humanitarian aid organizations in controlling regions (the famine left 260,000 dead, half of which were under the age of 5. This included demanding up to $10,000 in taxes from each organization and attacking staff members.

However, there is light at the end of the tunnel. According to projections from the World Data Lab, Africa has now reached a milestone in the fight against poverty. As of March 2019—and for the first time since the start of the SDGs—more Africans are now escaping extreme poverty than are falling (or being born) below the poverty line (Figure 1). The pace of this net poverty reduction is currently very small: only 367 people per day. Nevertheless, by the end of this year, this rate will increase to over 3,000 people per day, resulting in a 1 million-person reduction in total African poverty in 2020. SEE: Poorest Country in the World