What Happens If You Take Two Extenze Pills A Day? 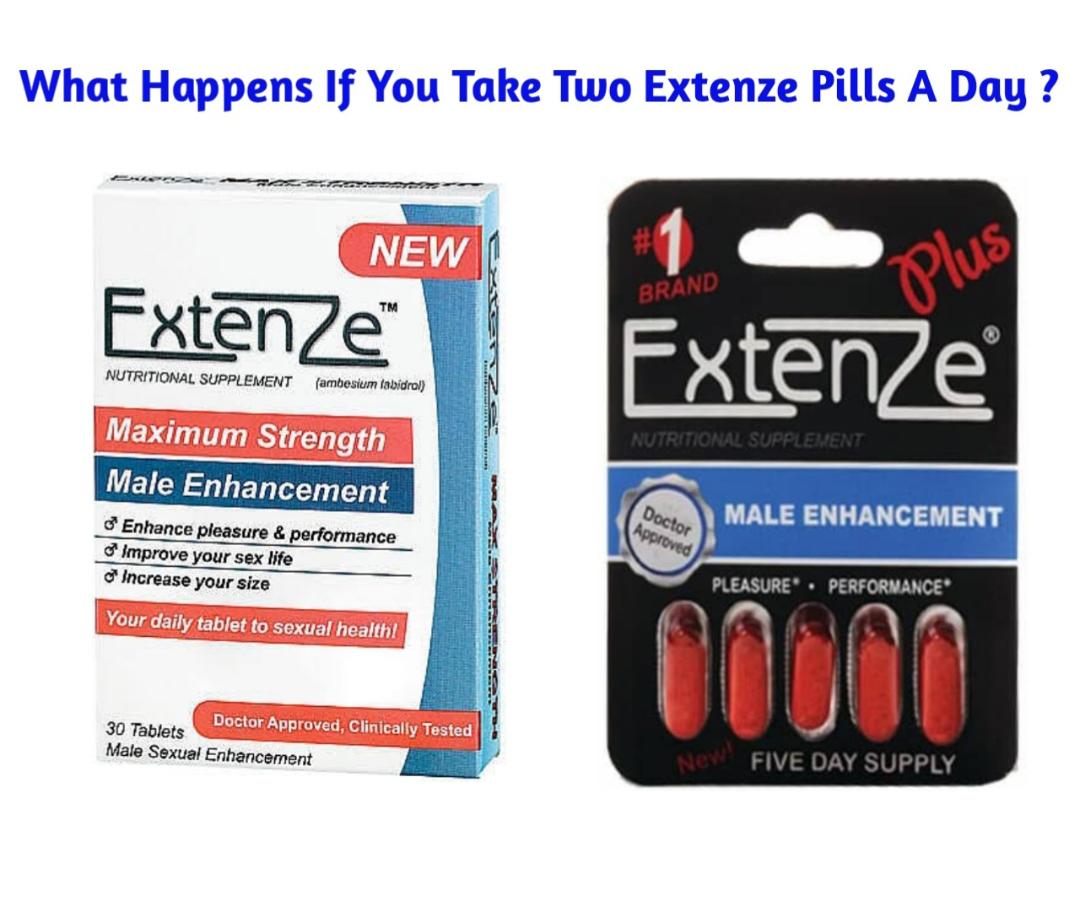 ExtenZe is a natural supplement produced by Biotab Nutraceuticals, it is intended to treat Erectile dysfunction and its sources. Some of its ingredients have been shown through research to be effective in treating some of the causes of Erectile dysfunction.

However, there’s no evidence to support that ExtenZe is effective in treating ED. Additionally, ExtenZe isn’t regulated by the Food and Drug Administration (FDA). Without this kind of oversight, manufacturers can put anything in their supplements. This can lead to allergic reactions or unintended effects on your body.

Erectile dysfunction (ED) happens when you can’t get or keep an erection long or hard enough to have penetrative sex. People can have ED symptoms at any age. It can result not just from medical or physiological conditions but also from stress, anxiety, or intimacy issues with a partner.

Around 40 percent of men over 40 have mild to moderate ED. And your chances of developing mild to moderate ED increase by about 10 percent each decade as you get older. Many causes of ED as you age stem from changes in your hormones, blood flow, and overall health. All of these contribute to erectile function.

How well does ExtenZe really work?

ExtenZe claims to reduce the symptoms of erectile dysfunction and improve your sexual function as the ingredients make their way through your body. But no evidence exists in favor of its function. Quite the opposite is true.

Here’s what some of the most trustworthy research says about ExtenZe:

What are the active ingredients in ExtenZe?

Some of the active ingredients in ExtenZe have indeed been used as natural remedies to treat ED for centuries. Some have research to back them up. But others are only supported by anecdotal evidence. Still others may even have unwanted or dangerous side effects if you take too much.

Here’s a list of ingredients commonly found in ExtenZe and what they’re purported to do:

Yohimbe, or yohimbine, is an herbal supplement made from the bark of the Pausinystalia johimbe tree and common in traditional West African medicine used to treat male infertility. It’s thought to be effective in treating ED because it blocks alpha-2 adrenergic receptors that usually prevent erections and help produce nitric oxide, which improve blood flow to the penis.

L-arginine is an amino acid that’s been found to be useless against ED in some studies, but it may be effective in high doses to help with blood flow. It can cause dangerous side effects if taken with Viagra.

Zinc is a mineral that’s important to your diet. Some research provides evidence that taking 30 milligrams of zinc and magnesium a day can increase testosterone levels.

But other research found this to be true only if you’re not already getting enough zinc, so taking extra zinc won’t have any effects on your ED.

Pregnenolone is a naturally occurring hormone that helps your body make testosterone and many other hormones. But there’s no evidence that taking supplements has any effect on ED or sexual function.

DHEA is a naturally occurring substance in your body that helps it produce other hormones like testosterone. It has shown some promising results in small amounts for treating ED. But your body won’t make any extra DHEA if you take it in a supplement, and DHEA supplements can have dangerous interactions with certain medications.

DHEA and pregnenolone, two common ingredients in ExtenZe, are banned from professional athletic competitions. This is because they’re known as performance enhancers. Athletes who test positive for these substances in routine drug tests aren’t allowed to take part in professional sports. Just ask LaShawn Merritt. He’s an Olympic sprinter who was banned from taking part in any professional activities in 2010 for 21 months when these ingredients were found in his system.

What Happens If You Take Two ExtenZe Pills A Day?

Taking too much ExtenZe can cause priapism, a painful erection that lasts longer than 4 hours. This can damage penis tissue because blood stored in the penis isn’t receiving any oxygen. Get emergency treatment right away if this happens. But don’t take ExtenZe if you’re taking any medications that can interact with any of its ingredients. These interactions can cause dangerous side effects that can be deadly. If you’re unsure whether your current medications may interact with ExtenZe, talk to your doctor.

Potential side effects and precautions

Natural ingredients found in supplements like ExtenZe have documented side effects, including:

There’s no reliable evidence that ExtenZe or any related supplements work at all. They may even have the opposite effect. Undeclared ingredients may be harmful and interact with your body and other medications. Always talk to a doctor first before trying any of these supplements.

Try one or more of the following remedies to address possible causes of ED symptoms:

Reduce or quit smoking cigarettes or other products that contain nicotine. Quitting can be difficult, but a doctor can help you develop a cessation plan that’s right for you.

Reduce or stop drinking alcohol. Heavy consumption can increase your risk of ED.

Lose weight if you’re overweight or have obesity. This can improve ED symptoms.

Do more physical activity and eat a healthy diet. Both of these have been demonstrated to reduce ED symptoms. Meditate or spend time relaxing each day to reduce stress or anxiety that may cause ED.

Improve communication with your partner. Unresolved or underlying relationship issues may be affecting your ability to be intimate with them.

Have sex regularly (more than once a week). This can reduce your chance of developing ED.

See a counselor or therapist if you believe that underlying mental or emotional issues may be resulting in ED symptoms. SEE: Can I Take Postinor 2 Twice In A Week?

How Long Does It Take For Extenze Liquid To Work