How to Spot a Fake Funbact A Cream and Original 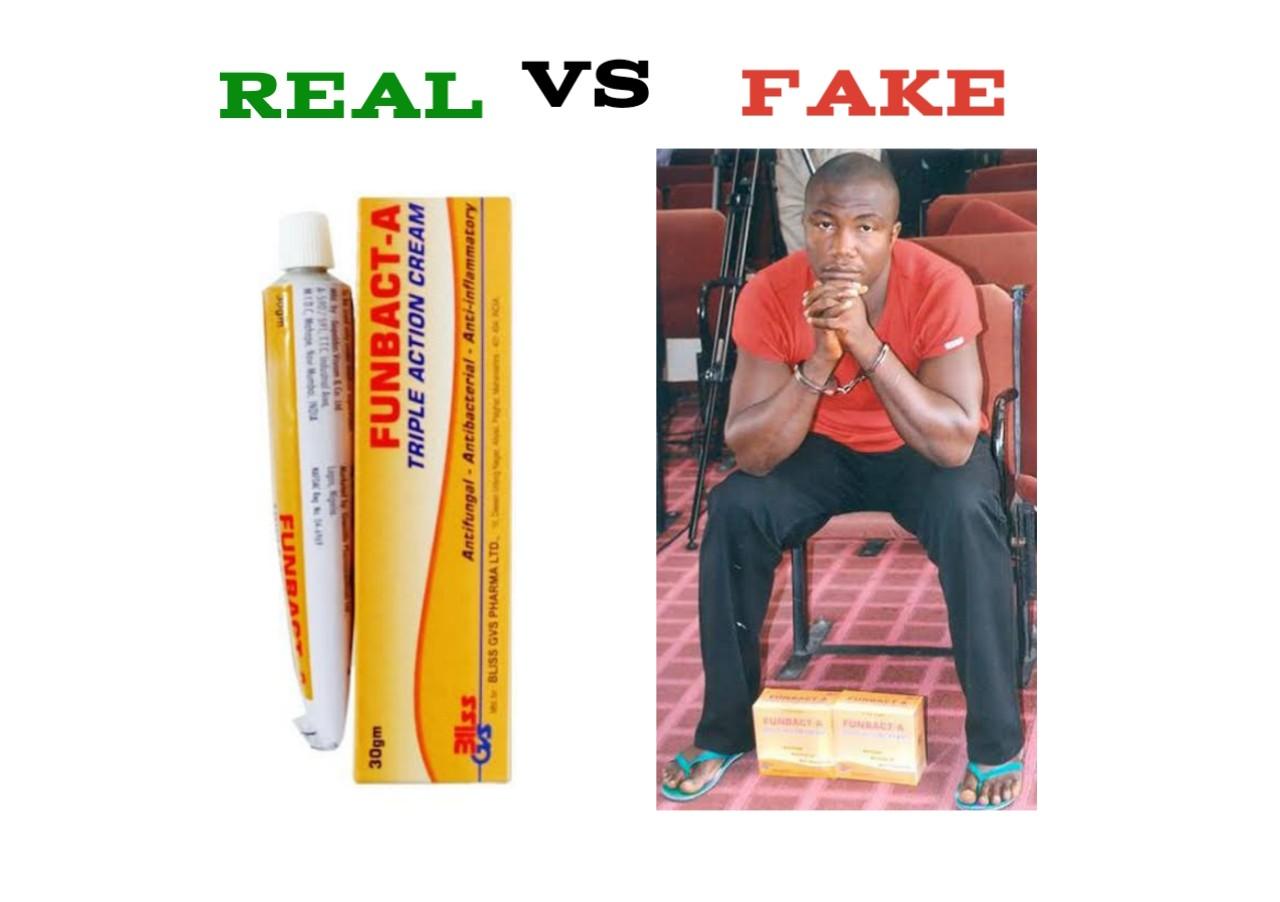 Funbact-A is one of the most counterfeited products in Nigeria. The cream is a combination of a synthetic antifungal agent Clotrimazole; a broad-spectrum antibacterial antibiotic Neomycin sulphate; and a potent topical corticosteroid Betamethasone dipropionate.

Funbact-A provides comprehensive treatment for various inflammatory dermatological disorders superadded with bacterial or superficial fungal infections of the skin. Betamethasone dipropionate is one of the most potent topical corticosteroids available and rapidly controls the symptoms such as itching, redness, and scaling.

Many times, the inflammatory skin disorders which respond to topical corticosteroids are superadded with bacterial and/or fungal infections of the skin. In these conditions, treatment with anti-inflammatory agents alone is not sufficient and a proper antibiotic has to be added to the regimen.

Clotrimazole is a broad-spectrum synthetic antifungal agent which has fungicidal action against all the fungi responsible for superficial fungal infections of the skin. Neomycin sulphate is a broad-spectrum antibacterial. Hence, Funbact-A cream effectively controls inflammatory disorders superadded with bacterial and/or fungal infections of the skin.

Counterfeit products are everywhere nowadays, filing the markets with twin scourges, often very similar, or even fairly identical to the originals, with almost certainly lower quality but much cheaper, which makes them very understandably more attractive for consumers that have no means to purchase the real deal – the first generation goods.

Nigeria has no specific anti-counterfeiting law – at least, not a broad one that covers all types of goods and all species of anti-counterfeiting. Hence, the fight against counterfeits involves the creative application of the various laws that affect rights holders in one way or another.

Recently, a raid by the National Agency for Food and Drug Administration and Control (NAFDAC), led to the seizure of unwholesome and adulterated Funbact A Triple Action cream, worth over N4,198,000 in Ebonyi southeast Nigeria. Unfortunately, many of these products have already reached the consumers leading to many unpalatable stories as expressed by a Twitter user named Elsie Godwin who complained bitterly about a Fake Funbact A cream she purchased unknowingly. Apart from Nigeria, fake Funbact A cream is also prevalent in Ghana, Cameroon, South Africa, and Zimbabwe.

The scary part of this is that instead of just getting a fake, consumers are getting potentially dangerous products in the deal. As consumers become more comfortable with purchasing products online, counterfeiters become more adept at selling their fake wares. Different demographics of customers can be targeted by creative counterfeiters around the world by marketing in channels that make it harder to identify, secure evidence, and prosecute foreign sellers.

According to Redpoints, it’s obvious there’s a growing trend of fraudulent products in the cosmetics industry, but the most important aspect of this trend is the danger to consumers when it comes to counterfeit cosmetics. With cosmetics as we’ve discussed, it can be a health hazard that you might not even know is as dangerous as it is.

Depending on the type of counterfeit cosmetic, analysis can reveal a whole range of toxic cosmetic ingredients due to formulations for color, consistency, sheer, and texture to keep the product in a visually appealing state. It’s not always an ingredient that is directly added to the product but an unintended ingredient as a by-product from mixing multiple chemicals together to create the final product.

Counterfeiters have no reason to ensure safety and rarely test these final products since they don’t have to abide by health regulations, product testing, or get certification procedures. We used a report on toxic cosmetics to reference health effects and dangerous reactions you could get from counterfeit cosmetics:

A consumer may not have access to most of the test equipment used by regulatory bodies to verify the identity of a drug product but here are simple guidelines that can help you avoid a fake Funbact A Cream;

Buy Funbact A Cream Only From Reputable outlets

Health officials warn that there are many rogue pharmacies and shops that often sell unapproved or counterfeit products outside the safeguards followed by standard outlets.

These rogue pharmacies, chemists, or shops may actually be operated by criminals, and medicines or cosmetics bought from these websites can be dangerous and may put your health at risk.

These pharmacies, chemists, or cosmetic shops often sell medicines and products that can be dangerous because they may:

This is the easiest method to check the authenticity of Funbact A Cream. Check the packaging for details like unusual fonts, print color, and missing logo. Analyze whether it appears the same or different from the one you have used before. 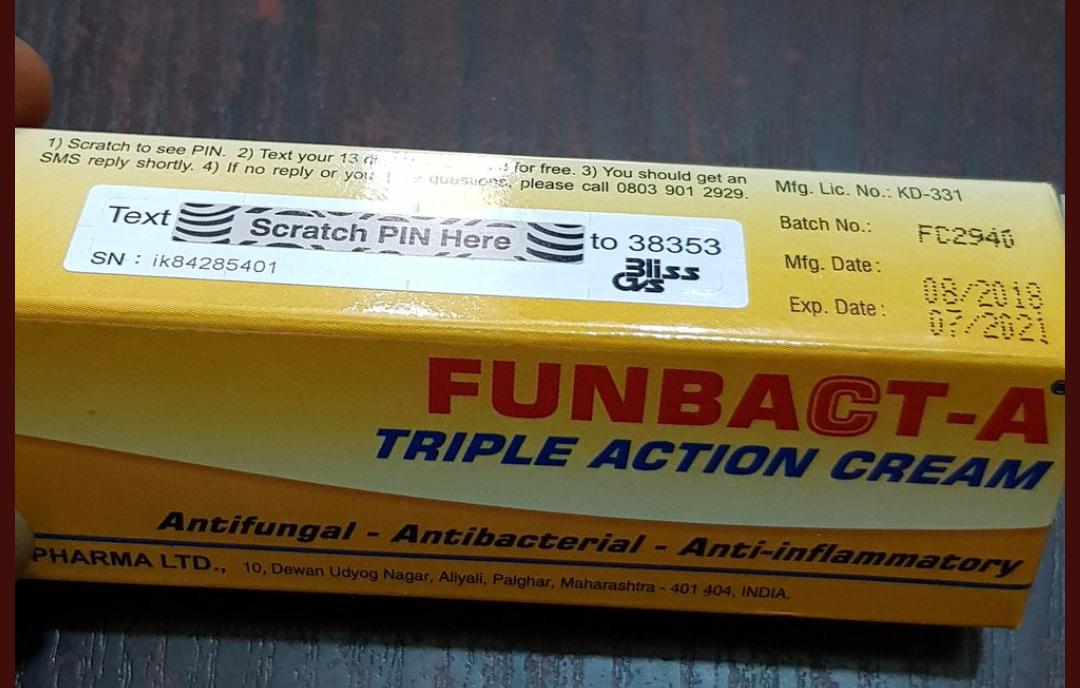 This is the fastest means of verifying the authenticity of a Funbact A Cream. Many countries have unique methods for the verification of the genuineness of products using authentication codes or other online portals to confirm the authenticity of the medicines or products being purchased.

Greenlife pharmaceuticals the sole distributor of the cream in Nigeria has introduced a digital method of confirming the originality of a Funbact A cream. Each Funbact A cream now comes with a mobile authentication code that can be used to verify each tube using the following steps;

Step 1: Scratch the ash-like panel to reveal the code or Pin

Step 3: You should receive an instant message that indicates whether the product is genuine or fake 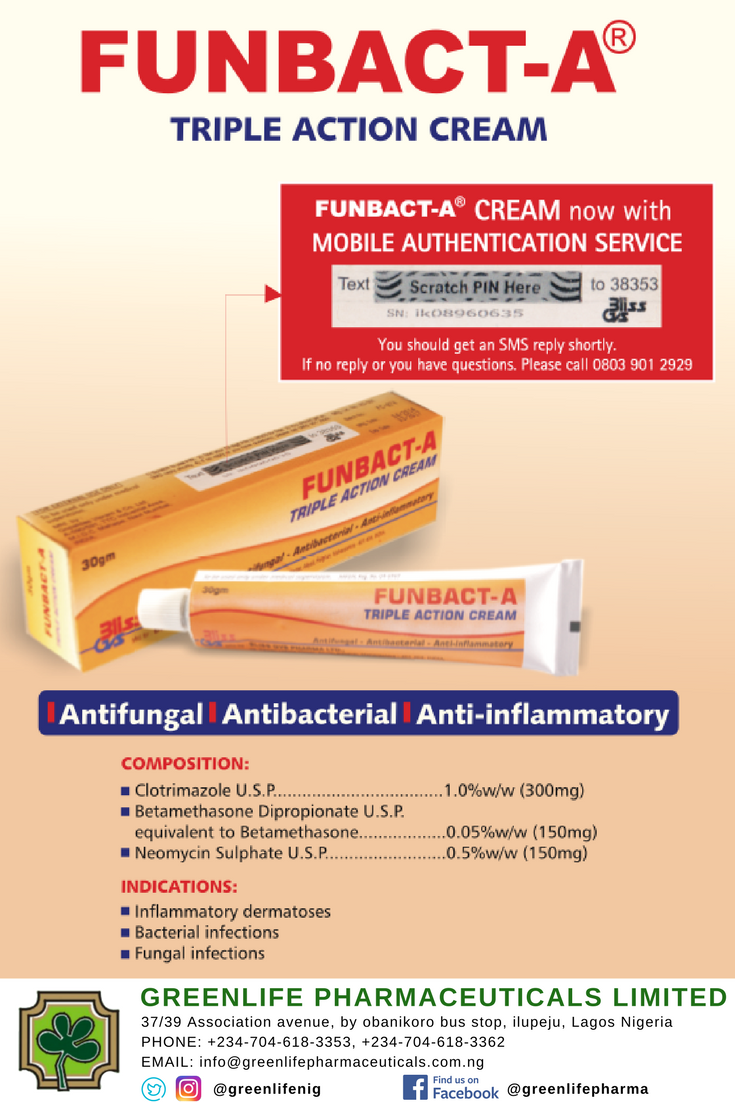 READ: How to Spot Fake vs Real Dove Soap and Body Wash

How To Spot White Gold Cream Fake Vs Real

How To Know Fake Hair Wonder Cream
how to know fake funbact a
March 26, 2021 Health FeaturesPublic HealthComments Off on How to Spot a Fake Funbact A Cream and Original