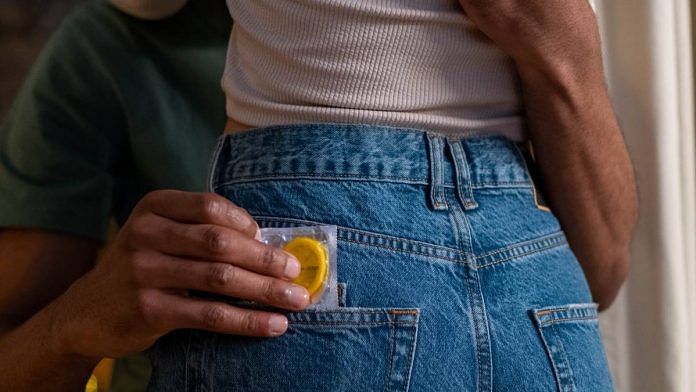 Make sure that your penis does not touch your partner’s genital area before you have put on a condom – semen can come out of the penis before full ejaculation (you have come). If this happens, or if semen gets into your partner’s vagina during vaginal sex while using a condom, you may need emergency contraception. You should also consider having an STI test.

There are 2 types of condoms:

How well does it prevent pregnancy?

About 13 out of 100 women using only male condoms for birth control get pregnant in a year of use.

The condom for women (female condom) is a tube with a flexible ring at the open and closed ends. It’s made of synthetic rubber and covered in a silicone-based lubricant. You slide the closed end into your vagina and push the ring into place over the cervix. The ring at the open end should hang outside the vagina.

How well does it prevent pregnancy?

While very important for preventing sexually transmitted diseases or infections, this is one of the least effective forms of birth control. It has one of the highest pregnancy rates of all birth control methods.

About 21 out of 100 women using female condoms get pregnant in a year of use.

Generally, it takes 3-5 years from the date of manufacture for a condom to expire. However, this depends on the manufacturer and how the condom is stored. Condoms are affected by heat and friction, so the way people store them is important. Always store condoms in a cool, dry place, as they can break down in extreme hot or cold temperatures. Storing condoms in an extreme temperature environment can weaken a condom and make it less effective. People should not store condoms in their wallets, as they can be exposed to friction and heat which can cause weakness or tears.

In the US, the Food and Drug Administration requires that all condoms have an expiration date— each individual condom should have one printed on its wrapper. And this date actually means something important. Condoms become less effective after they’ve passed it.

The materials used in making condoms degrade and deteriorate over time, making the condom less strong and less flexible. As a result, the condom will be more prone to break or tear during sex, and is then, of course, less effective. The best way to check the expiration date is to just read what’s printed on the wrapper of the condom you’re using.

What Happens If You Use An Expired Condom?

When you use an expired condom, you increase your risk of contracting sexually transmitted diseases or infections, in addition to the high chances of an unwanted pregnancy. If a condom is past its expiration date, a person should throw it away, as it will be more likely to break than a newer one. Read: How to Dispose of a Condom