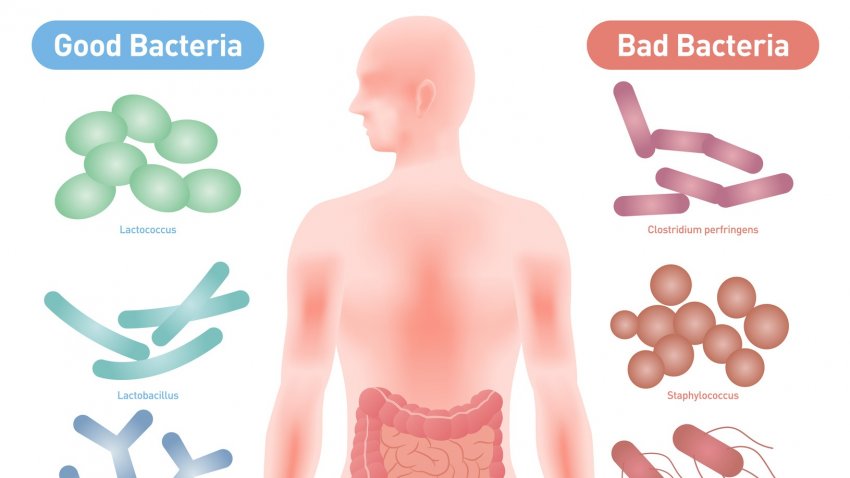 Bacteria are everywhere, including your entire body. The bacteria in our body weighs as much as our brain–3 lbs! Bacteria can be harmful, but some species of bacteria are needed to keep us healthy. The bacteria on our skin, in our airways, and in our digestive system are the first line of defense against foreign “invaders” (pathogens) that can cause infection and other problems.

Bacteria also act as “tuning forks” for our body’s immune system, making sure it’s pitched just right. The immune system shouldn’t be too sensitive or too sluggish: it needs to respond quickly to an infection but it shouldn’t over-react. (If it does over-react and attacks the body itself, the result is an autoimmune disease, such as rheumatoid arthritis, lupus, or MS). Each person has a personalized collection of bacteria, called the microbiome. We acquire our first bacteria while being born, and every day our environment exposes us to more. Some of these bacteria will take up residence inside the body and help develop a robust immune system.

The species of bacteria that colonize our respiratory and digestive systems help set up checks and balances in the immune system. White blood cells police the body, looking for infections, but they also limit the amount of bacteria that grow there. Likewise, bacteria keep white blood cells from using too much force. Bacteria also help out by doing things cells are ill-equipped to do. For instance, bacteria break down carbohydrates (sugars) and toxins, and they help us absorb the fatty acids which cells need to grow. Bacteria help protect the cells in your intestines from invading pathogens and also promote the repair of damaged tissue. Most importantly, by having good bacteria in your body, bad bacteria don’t get a chance to grow and cause disease. 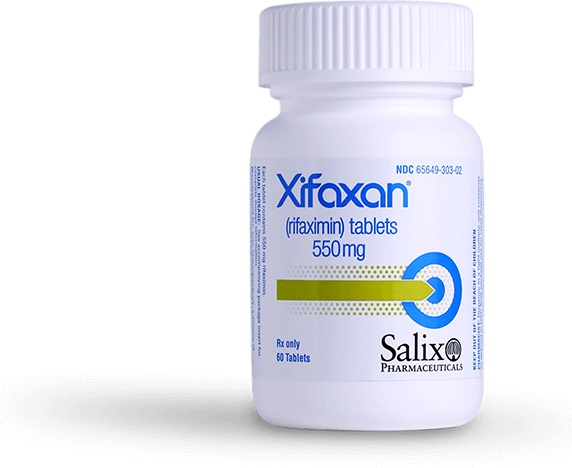 Approved by the FDA for medical use in the United States in May 2004, Rifaximin, sold under the brand name Xifaxan among others, is an antibiotic that fights bacterial infection only in the intestines Rifaximin works differently from other antibiotics because it passes through your stomach and into your intestines without being absorbed into your bloodstream. Because rifaximin treats only the intestinal tract, it will not treat infections of other parts of the body.

Xifaxan is used to treat travelers’ diarrhea caused by Escherichia coli (E. coli) in adults and children who are at least 12 years old. Travelers’ diarrhea (TD) is a stomach and intestinal infection. TD is defined as the passage of unformed stool (one or more by some definitions, three or more by others) while traveling. It may be accompanied by abdominal cramps, nausea, fever, and bloating. Occasionally bloody diarrhea may occur. Most people get this infection by eating food or drinking fluids that have been contaminated with E. coli bacteria. Xifaxan is also used to treat irritable bowel syndrome (IBS) in adults whose main symptom is diarrhea.

Xifaxan is also used to lower the risk of a decline in brain function in adults with liver failure. Brain function can be affected when the liver stops working and cannot remove toxic substances from the body.

In a systematic review and meta-analysis of 10 studies of patients with small intestinal bacterial overgrowth (SIBO), antibiotics, in general, were more effective than placebo, with a combined breath test normalization rate of 51.1% compared to 9.8%. Rifaximin was by far the most commonly studied antibiotic, with an overall breath test normalization rate of 49.5%, according to the review, published in the October 2013 Alimentary Pharmacology & Therapeutics. Rifaximin kills many of the bacteria associated with SIBO but does not seem to affect many of the bacteria native to the colon’s microbiome.

Eat a Diverse Range of Foods: There are hundreds of species of bacteria in your intestines. Each species plays a different role in your health and requires different nutrients for growth. Generally speaking, a diverse microbiota is considered to be a healthy one. This is because the more species of bacteria you have, the greater number of health benefits they may be able to contribute. A diet consisting of different food types can lead to a diverse microbiota (Unfortunately, the Western diet is not very diverse and is rich in fat and sugar. In fact, it is estimated that 75% of the world’s food is produced from only 12 plants and 5 animals. However, diets in certain rural regions are more diverse and rich in different plant sources.

Eat Lots of Vegetables, Legumes, Beans, and Fruit: Fruits and vegetables are the best sources of nutrients for a healthy microbiota. They are high in fiber, which can’t be digested by your body. However, fiber can be digested by certain bacteria in your gut, which stimulates their growth. Beans and legumes also contain very high amounts of fiber.

Some high-fiber foods that are good for your gut bacteria include:

Many of these foods are rich in lactobacilli, a type of bacteria that can benefit your health. People who eat a lot of yogurts appear to have more lactobacilli in their intestines. These people also have fewer Enterobacteriaceae, a bacteria associated with inflammation and a number of chronic diseases.

Similarly, a number of studies have shown that yogurt consumption can beneficially modify intestinal bacteria and improve symptoms of lactose intolerance in both infants and adults. Certain yogurt products may also reduce the abundance of certain disease-causing bacteria in people with irritable bowel syndrome.

Two studies showed that yogurt also enhanced the function and composition of the microbiota.

However, it is important to note that many yogurts, especially flavored yogurts, contain high levels of sugar.

Therefore, the best yogurt to consume is plain, natural yogurt. This kind of yogurt is made only of milk and bacteria mixtures, which are sometimes referred to as “starter cultures.”Furthermore, fermented soybean milk may promote the growth of beneficial bacteria, such as Bifidobacteria and lactobacilli, while decreasing quantities of some other disease-causing bacteria. Kimchi may also benefit the gut flora.

Don’t Eat Too Many Artificial Sweeteners: Artificial sweeteners are widely used as replacements for sugar. However, some studies have shown that they can negatively affect the gut microbiota. One study in rats showed that aspartame, an artificial sweetener, reduced weight gain, but it also increased blood sugar and impaired insulin response. The rats fed aspartame also had higher Clostridium and Enterobacteriaceae in their intestines, both of which are associated with disease when present in very high numbers.

Eat Prebiotic Foods: Prebiotics are foods that promote the growth of beneficial microbes in the gut. They are mainly fiber or complex carbs that can’t be digested by human cells. Instead, certain species of bacteria break them down and use them for fuel. Many fruits, vegetables, and whole grains contain prebiotics, but they can also be found on their own. Resistant starch can also be prebiotic. This type of starch is not absorbed in the small intestine. Rather, it passes into the large intestine where it is broken down by the microbiota.

Breastfeed for at Least Six Months: A baby’s microbiota begins to properly develop at birth. However, some recent studies suggest that babies may be exposed to some bacteria before birth. During the first two years of life, an infant’s microbiota is continuously developing and rich in beneficial Bifidobacteria, which can digest the sugars in breast milk. Many studies have shown that infants who are formula-fed have an altered microbiota that has fewer Bifidobacteria than infants who are breastfed. Breastfeeding is also associated with lower rates of allergies, obesity, and other diseases that may be due to differences in the gut microbiota.

Eat Whole Grains: Whole grains contain lots of fiber and non-digestible carbs, such as beta-glucan. These carbs are not absorbed in the small intestine and instead make their way to the large intestine. In the large intestine, they are broken down by the microbiota and promote the growth of certain beneficial bacteria. Whole grains can promote the growth of Bifidobacteria, lactobacilli, and Bacteroidetes in humans.

Eat a Plant-Based Diet: Diets containing animal-based foods promote the growth of different types of intestinal bacteria than plant-based diets do. A number of studies have shown that vegetarian diets may benefit the gut microbiota. This may be due to their higher fiber contents. One small study found that a vegetarian diet led to reduced levels of disease-causing bacteria in obese people, as well as reduced weight, inflammation, and cholesterol levels.

You should not use take Xifaxan if you are allergic to rifaximin or medications such as rifabutin (Mycobutin), rifampin (Rifater, Rifadin, Rifamate), or rifapentine (Priftin).

Before you take Xifaxan, tell your doctor if you have severe liver disease, diarrhea with fever, or diarrhea that is watery or has blood in it.

Take Xifaxan for the full prescribed length of time. Your symptoms may improve before the infection is completely cleared. Rifaximin will not treat a viral infection such as the common cold or flu, or any form of diarrhea that is caused by a virus. Call your doctor if your symptoms do not improve after 24 hours, or if they get worse while taking this medicine. Xifaxan does not treat all bacterial forms of traveler’s diarrhea.

You should not take Xifaxan if you are allergic to rifaximin, rifabutin, rifampin, or rifapentine.

To make sure Xifaxan is safe for you, tell your doctor if you have:

Tell your doctor if you are pregnant or breastfeeding.

Xifaxan should not be given to a child younger than 12 years old. READ: Should I Take Xifaxan With Food

How Fast Does Xifaxan (Rifaximin) Work

Xifaxan Tablets: Everything You Should Know