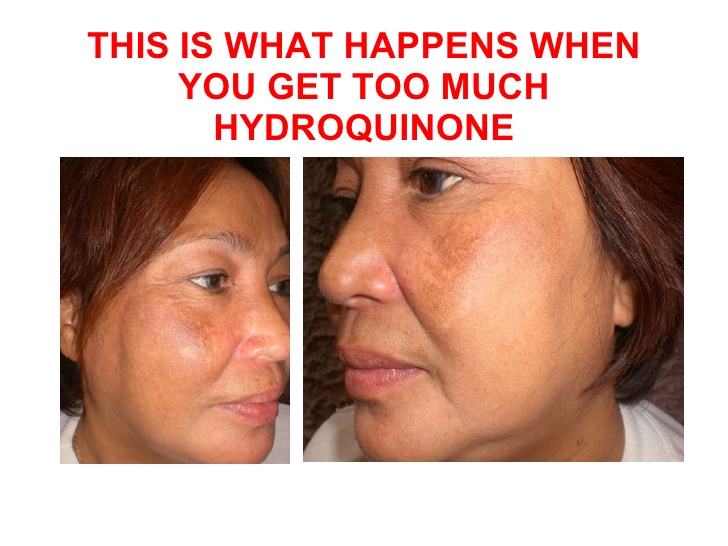 Hydroquinone is a skin-lightening agent used to lighten areas of darkened skin such as freckles, age spots, chloasma, and melisma caused by pregnancy, birth control pills, hormone medicine, or injury to the skin. Hydroquinone decreases the formation of melanin in the skin.

Hydroquinone bleaches your skin by decreasing the number of melanocytes present. Melanocytes make melanin, which is what produces your skin tone. In cases of hyperpigmentation, more melanin is present due to an increase in melanocyte production. By controlling these melanocytes, your skin will become more evenly toned over time. It takes about four weeks on average for the ingredient to take effect. It may take several months of consistent use before you see full results.

Health Benefits and Side Effects of Hydroquinone

Hydroquinone, described by the BBC as “the biological equivalent of paint stripper”, can remove the top layer of skin, increasing the risk of skin cancer, and cause fatal liver and kidney damage. Mercury can cause similar life-threatening health problems. Unless they are issued on prescription by a doctor, creams containing hydroquinone, steroids or mercury are banned in many countries including the UK because of their potentially serious side-effects.

There are so many fake K brothers products circulating in the market, most of which have been disowned by the company.  Here is what K brothers whitening creams contain;

Glutathione is an antioxidant made from glycine, glutamic acid and cysteine. Glutathione is an antioxidant naturally found in human cells that neutralizes free radicals, boosts the immune system and detoxifies the body. It can also cause skin lightening by converting melanin to a lighter color and deactivating the enzyme tyrosinase, which helps produce the pigment. READ: Can I Use K Brothers Papaya Soap On My Body?

The common bearberry used for centuries in herbal medicine, bearberry leaves contain arbutin, which strongly inhibits tyrosinase activity. Arbutin is a natural derivative of hydroquinone that is much more stable and safer than hydroquinone itself and can therefore be used regularly for a long period of time. While hydroquinone works by killing the cells that produce pigmentation and melanin, arbutin inhibits the enzymes that stimulate pigment-producing cells.