After series of tweets lampooning members of the first family over comment absolving President Muhamadu Buhari of any knowledge of the shameful state of the Aso Rock clinic which the President’s wife Aisha Buhari claimed has no single syringe or Paracetamol, Social Commentator and author Femi Aribisala has called on Nigeria’s former ruling party to immediately resolve to field Dr Sule Lanido the former Governor of Jigawa state as its flag bearer in the 2019 presidential elections. In a tweet posted on his tweeter time line, Aribisala wrote “PDP Should Immediately Resolve to Field Sule Lamido as president in 2019 in order to unseat incompetent Buhari and move the country forward. 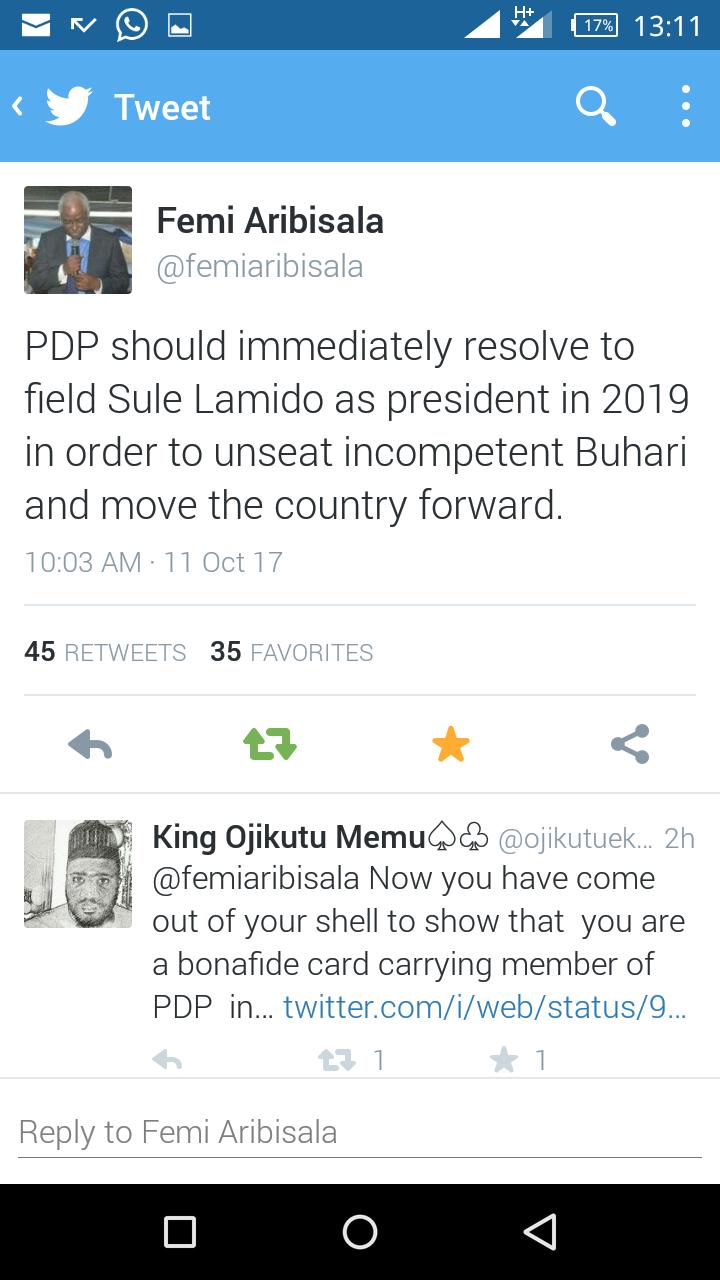 President Buhari’s Government has since gone out of favour with most Nigerians owing to large scale corruption among the president’s closest aides, high food prices, a complex and inefficient foreign exchange regime that has made the naira almost worthless in foreign markets, unemployment and a crippled industrial sector that has lost over 60 percent of its workforce in less than 2 and half years.

Owing to his failing health, most political analysts had expected the president retire after his first term but from his body language and revelations coming from the recent NNPC scandal it appears the president is already preparing for the 2019 presidential election.

Sule Lamido who is the front runner to clinch the PDP ticket for the 2019 presidential elections barring any unforeseen circumstances was credited with transforming the landscape in Jigawa including the construction of the massive state owned airport which was transferred to the Federal Government. Many who know him describe him as a detribalized Nigerian with a nationalist mindset unlike Dr Rabiu Musa Kwankwaso a comment re-echoed by most members of the Redeemed Christian church of God after the destruction of their Mega Church by the current APC led government in Jigawa. In the light of current scramble into the PDP for tickets, delegates to the party’s presidential primaries will have a long list of candidates to choose from.